Sikhs organize community kitchen at religious conference in US 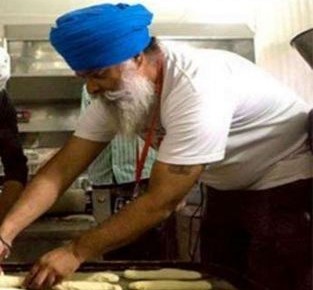 New York (Matters India): Setting an example of inter-faith understanding, the Sikh community in Salt Lake City has organised a community kitchen for nearly 7,000 attendees at the 2015 Parliament of World’s Religions underway in Utah, a media report said.

Members from 80 countries and 50 different religions, who arrived in the US on Thursday night to attend the inter-faith conference, would be served food throughout the five-day event by the Sikh community, the Deseret News reported.

As the visitors sat on a carpet, they were served a vegetarian meal that included rice, curry, vegetables and ‘naan’.

“Everyone sits on the floor and feels equal. Let us say President Obama and a homeless man come to the ‘langar’ (community kitchen). They would sit down together,” the report quoted Sarbjit Singh of Khalsa Care Foundation as saying.

He said that everyone who visited the ‘gurdwaras’ (Sikh holy places) were served food, but the amount of food to be served during the religious conference was massive, The Business Standard reported.

“Loads of food, prepared by volunteers of two gurdwaras in Salt Lake County, has been trucked to the Salt Palace Convention Center, where the parliament is being conducted,” Jagdish Singh Gill, leader of the langar committee, said.

“It is a service to humanity. We want to share with them. They are coming from all over the world. We want to be able to provide them free food, tea and coffee,” he said.

Meanwhile, the attendees have given a positive response to the services offered by the Sikh community.

Participant Jen Bernstein from Petaluma, California, said that sitting down for a meal with people of such diverse faith backgrounds was “incredible”.

“It is just remarkable. It tears me up a little bit, quite honestly, to see so much hospitality, so much grace and unflagging hospitality and kindness,” she said.

The assembly’s mission is to discuss the problems among diverse faiths that include war, hatred, climate change and income equality.