(Note: A simple life style and nothing else, can be more timely and urgent for the Church in India. Congrats to the CBCI for what said. Now it should start practicing it. It should en mass rise up  really to get identified and look identified with the call of Pope Francis: “a poor church for the  poor”. If you want to look for such an ideal in India to imitate you don’t have to waste any time at all: Just look at the Naked Fakir, Gandhiji. He was a political liberator, also spiritual. If you look for a similar person in all the churches you may find none, except Jesus whom all the divided churches claim to be their founder. But he did not found an upteen infighting divided churches. Therefore all the churches including the Catholic Church should look to the Carpentor of Nazareth and  imitate his life style. In short to be “Jesus-like” in thought, word, deed, dress and appellation. 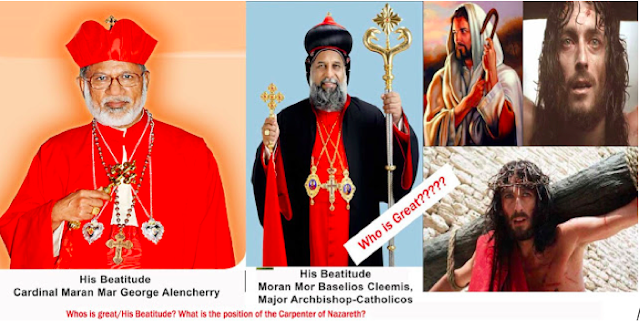 What was his life style and what is the  life style of the princes of the Catholic church? Nothing can be more striking and convincing than a pictorial explanation. So have a peep at the picture given below and make your own comparisons and conclusions. It is this vision, this ground reality of the Catholic Church and its  contrast to the lived life of Jesus, similar to that of the Naked Fakir, that make thousands  shout  in utter  disgust and revulsion: “What you are speaks  to us so loud that we can’t hear what you say!” Can any one complain against this shouting protest? Words move, examples draw. That is why there  are teeming  Millions to adore  and follow the Carpenter of Nazareth, not the divided churches or their  princely leaders who  are wedded to affluence and live a royal life style. You have to become the change you preach. Hence the compelling command of St. Francis of Assisi: “Go round the whole world and preach, but never open your mouth, preach with your example.” More later. james kottoor, editor)

Bangalore: The apex body of the Catholic Church in India has urged its members and priests to shun “excessive institutionalization, clericalism and extravaganza.”

They should, instead, adopt a simple life style in their work and open their houses and institutions to the poor, says a statement from the Catholic Bishops’ Conference of India issued at the end of its 32nd biennial plenary in Bangalore, southern India. 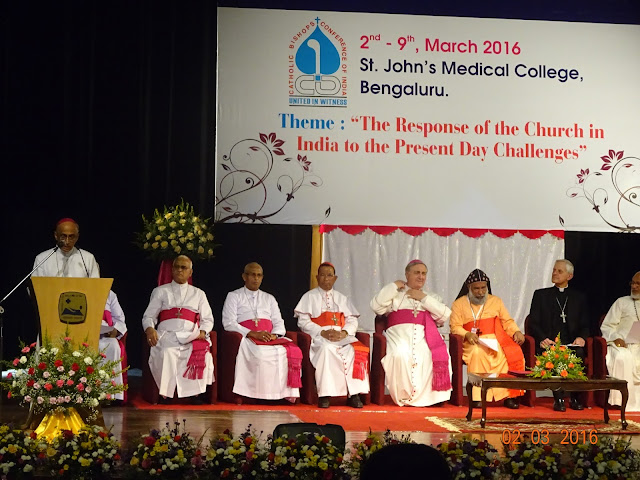 The March 2-9 plenary also urged the bishops and priests to be “first and foremost, shepherds of the flock, available and service minded,’’ and to lead a life of “simplicity and spirituality that can be an inspiration to everyone.”

Promoting transparency and accountability at all levels of administration of the Church — parish and institutions was another major proposal made by the assembly.The statement mentions Saints Thomas the Apostle, Francis Xavier, Gonsalo Garcia, Alphonsa, Kuriakose Elias Chavara, Euphrasia, and Joseph Vaz as persons for emulation.

Referring to the idea of a new way of being Church for an effective response, the CBCI said that “both Mother Teresa and Pope Francis are exemplary models for living with such a vision and mission.”

“Mother Teresa changed her routine way of living and made a radical decision for living her religious/consecrated life in a thoroughly new way,” the statement says, adding that “…the lifestyle of Pope Francis challenges us to be authentic in our Christian vocation by freeing ourselves of traditional structures, institutionalization and to break new ground, shedding the comforts and privileges of office and status… and bringing the joy of the Gospel to one and all.”

The statement described the Church in India as a “vibrant community making significant contributions to nation building through education, social development, health care and service, especially to the poor.’’

The “Church is blessed with over one-hundred and twenty five thousand religious priests, religious brothers and religious sisters who serve the Church significantly through a large network of educational, health and social service institutions,” the statement says.

While commending the selfless and dedicated life of the consecrated persons, the CBCI expressed concern that lately “there is a decrease in the number of candidates opting for consecrated life.”

Terming the consecrated life as a “gift of God,” the 178 bishops who attended the plenary assembly said that a fresh, creative and self-critical approach is needed to make it more attractive and relevant. They stressed the need for the consecrated way of life to become a combination of contemplative and active service, and shift its emphasis from “maintenance to mission.”

According to the bishops, careful selection of candidates and Christ centered formation and commitment to the poor can ensure the quality of consecrated life.

While paying tributes to the commitment of thousands of clergy who witness the mercy of God through parish community and their attached apostolate, “we are of the opinion that the priestly life needs a thorough renewal and updating,” the bishops said.