Show of military might as Emmanuel Macron is inaugurated as president

To relaunch new France & new EU – Angelique Chrisafis in Paris, in the Guardian, Sunday 14 May 2017

In the pic: President Macron and his wife Brigitte on the steps of the Élysée Palace after the handover ceremony.

(Note:  The target of France’s youngest post-war president is to unite  a divided France, equally to unite Europe – 27 countries as one block — to become a shining beacon of GLOCALISM (global+local = glocal), that is, holding on to the good points in both ‘global and local’, to become a Centrist,  for the rest of the world caught in the fight between nationalism and globalism, building walls and building bridges, nostalgia for an illusory past” and hope for a bright future with global vision.

juvenate", "re-launch". And of course "re-naissance". It was all intended to "re"-enforce. ‘Let the bygones be bygones without throwing the baby with the bathwater but to nourish the child to grow from strength to strength, "Recedant vetera, nova sint omnia!” Well-wishers the world over can only wish and pray that he succeeds. james kottoor, editor)

Emmanuel Macron, France’s youngest postwar leader, promised to rebuild his nation’s self-confidence and relaunch the flagging European Union as he took power on Sunday in a series of ceremonies that deliberately emphasised France’s military power.

“The world and Europe needs a strong France with a sense of its own destiny,” the independent centrist, 39, said in his first speech as president at the Élysée Palace. “We need a Europe that is more efficient, more democratic and more political, because it’s the instrument of our power and sovereignty,” he added, saying he would “rejuvenate and relaunch” the EU.

Macron, who won a clear victory over the far-right Front National leader, Marine Le Pen, after a divisive and bitter campaign, said his election showed France had turned away from “close-minded nostalgia for an illusory past” and instead chosen “hope”. He promised to “reinvent” the fractured and divided French nation, and restore “self-confidence” in a country that in recent years had become morose and fallen into “doubt and fear”.

Macron deliberately chose to mark his inauguration day with military symbolism – emphasising France’s defence strength at a time when the country is still under a state of emergency after a series of terrorist attacks, and currently has thousands of troops involved in military operations abroad, from west Africa to Syria and Iraq.

He broke with tradition by boarding an open-topped, camouflage military jeep – instead of a civilian limousine – for the traditional drive up the Champs-Élysées in Paris, where he lit the flame in tribute to France’s war dead at the tomb for the unknown soldier. He then added his own extra appointment to proceedings by making a personal visit to a military hospital where he went to the bedside of soldiers wounded on operations in Mali and Afghanistan. His team said he wanted to show “deep empathy for the defenders of freedom in our country”.

Macron’s vehicle slowed on the Champs-Élysées as it passed the point where a police officer was shot dead last month in an attack by a terrorist. With more than 1,500 security forces out in force and the state of emergency security procedures in place, Macron shook hands with crowds waving French and European flags who had gathered near the Arc de Triomphe under the careful eye of his security guards.

Macron had arrived at the 365-room presidential palace in the morning. A 60-metre red carpet had been rolled out and every centimetre of gravel raked by groundsmen who had been working since dawn. The outgoing, Socialist president François Hollande greeted him with a show of paternal arm-patting. But if it was Hollande who launched Macron’s political career by appointing him first as his deputy chief of staff and then as his economy minister, Macron was keen to politely but firmly set himself apart from his one-time mentor, who leaves office as France’s least popular president.

Hollande had said beforehand “I’m not handing power to a political opponent” and after the traditional closed doors briefing between the outgoing and incoming president, Hollande even mouthed “Good luck” at Macron as the new president saw him to his car. 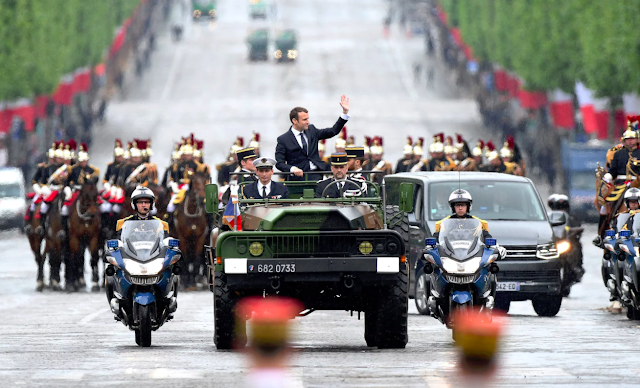 Macron waves from a military vehicle.

But Macron, who quit Hollande’s government last year complaining there was not enough pro-business reform and launched his own “neither left nor right” political movement, used the inauguration day to clearly set himself apart from his predecessor’s presidential style.

Where Hollande had been criticised for portrayed himself as an ordinary bloke and “President Normal”, who at first kept his modest, rented flat in Paris, Macron has indicated he wants to restore a form of lofty distance, viewing the head of state’s role as a haughty embodiment of the nation. The Macrons immediately moved into the private apartment at the Élysée Palace.

Only three years ago, Macron was unknown to the public. He won the presidency without a political party and never having run for elected office before. But although he had campaigned as an outsider who would revolutionise the political system, his years at the Élysée as Hollande’s deputy chief of staff meant he appeared instantly at home there.

Both on the red carpet in the Elysée courtyard and on the Champs-Élysées, Macron carefully carried out what is swiftly becoming his trademark: a long, slow, solitary walk to convey the authority of power. Yet behind closed doors, he immediately ran up the Élysée Palace staircase to his gilded new office two steps at time. After the solemn pomp of his first speech under the gold chandeliers of the Élysée’s salle des fêtes, Macron’s choice of music played by the orchestra, including the French cancan, was intended to set a lighter tone. 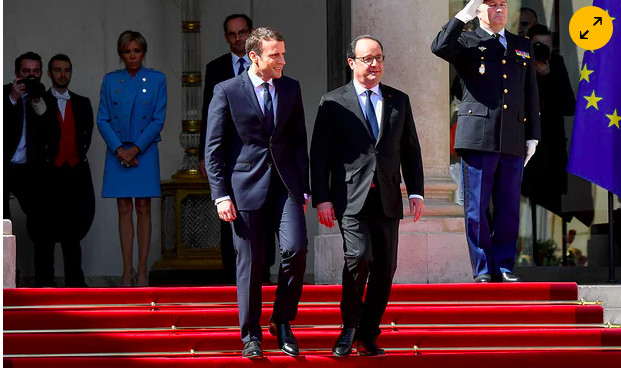 Macron, left, and Hollande at the Elysée Palace in Paris.

After a presidential election campaign marked by a series of corruption scandals, including a row over the rightwing candidate François Fillon accepting gifts of luxury bespoke suits worth thousands of euros, Macron’s team were quick to point out his inauguration suit had cost €450. Macron’s wife, Brigitte – who the new president has promised will have a new official “first lady” role to be defined after a consultation – wore an outfit loaned to her by the French fashion house Louis Vuitton.

Inside the Élysée Palace, Macron’s inner circle, who gathered with his close family members, said it was an “emotional” moment. But those in his fledgling centrist political movement know that his victory is not complete until the parliamentary election next month. Macron needs his new movement to win a majority of parliament seats if he is to enact his pro-business manifesto programme, including loosening France’s strict regulations on labour law. Without a majority, he could see his hands tied.

Macron has long said that he would have no “state of grace” after taking office. He is taking over a country exhausted by decades of mass unemployment, impatient with a stagnant economy, still living under a state of emergency, facing a constant terrorist threat and where the first round presidential poll showed almost half of French voters chose eurosceptic candidates or those opposed to free-market, business-friendly changes to labour laws.

Macron – who likes to constantly use the words hope, optimism and future – stressed that his work would begin immediately. He said he would not go back on his promises to “free up” labour law and support French business — despite warnings from unions and the left against his plans to implement labour law changes by decree. “I’ll begin work tonight,” he said.

One of his aides described the mood: “Very happy. Now there’s a huge amount of work ahead.”