Shakespeare’s Hamlet swings by the Vatican 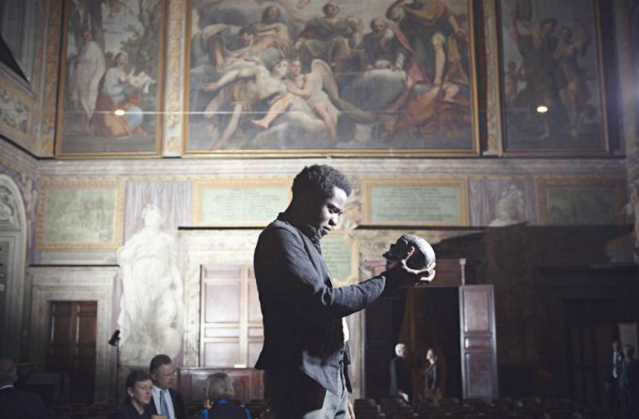 It was the first known performance of an entire Shakespeare play on Vatican grounds, albeit in an extraterritorial Renaissance palace. The actors, who had already traveled much of the world, performed Hamlet for a small audience against the grand backdrop of a former music hall in the Palazzo della Cancelleria, where the Papal Chancellery is housed.

“The Holy See is one of the few places that has a truly global, universal perspective,” said Nigel Baker, UK ambassador to the Holy See, who helped make the April 13 performance at the Vatican possible.

“Shakespeare is probably our most universal writer: Hamlet, a character who encapsulates the human condition,” Baker told CNA. “How can you not have this production of Hamlet here at the Holy See?”

“Hamlet is universal,” said Jonathan Fensom, set and costume designer of the world tour of Hamlet, who came up with the idea, along with directors Dominic Dromgoole and Bill Buckhurst.

“I think (Hamlet) represents all sorts of different emotions that we have as humans. And I think the world is better off (for it).”

In an interview with CNA, Fensom explained that the idea for the project evolved after a 2011 national tour of the play, which became the grounds of the documentary A Summer Hamlet.

After a similar tour with new actors in 2012, “a decision was made, in a bar,” he recalled: “Wouldn’t it be a laugh if we take a tour of Hamlet all over the world?”

There were initially reservations over whether to perform the play in certain regions, he said. However, “the decision was made that, anywhere in the world is better off with seeing Hamlet than not, because it poses questions, it poses all sorts of dilemmas in the human experience.”

As set and costume designer, Fensom had to overcome the logistical challenge of transporting sets, props, costumes – not to mention the personal belongings of the actors and crew – to all corners of the world.

“Initially I thought it was impossible,” he said.

The 2011 national tour had a vehicle to take the actors and crew from one place to another, he explained. Due to the nature of the itinerary on the world tour, however, such a vehicle would not be possible.

“The set, the costumes, and the actor’s possessions, all had to go into 12 trunks that could be then loaded onto airplanes, buses, trains, onto land rovers. It had to be a tour that they carried around with them.”

“It became a logistical problem as well as an aesthetic one,” Fensom said.

“On the costume and prop side, you were aware that very little maintenance could happen,” he said. “It wasn’t as if every day they could wash everything. We had to create an aesthetic that would look as good coming out of a trunk after traveling for hundreds of miles as if it’d been pressed, and all prepared, and washed.”

Despite the challenges, Fensom said he was nonetheless moved by the personal stories of those involved, even though he himself was only able to occasionally take part in the tour.

He pointed to one instance – a refugee camps in Calais, France, “where you’ve got groups of people who have absolutely nothing, but would come together and have a communal experience of wanting to watch a play and be entertained.”

According to its website, Globe to Globe Hamlet has to-date traveled 197 countries over the course of its two-year tour – often in regions of poverty and conflict.

Among the regions they visited include five refugee camps – including those in Calais and Jordan – where they performed Hamlet to Syrian, Yemeni, and Central African Republic refugees. They held a performance in Kiev's Maidan Square on the eve of Ukraine's presidential elections. The troupe also held free performances for local school children in eight poorer countries, including Burma, Sri Lanka, and Cambodia.

Naeem Hayat, one of the two actors who has played Hamlet on the tour, recounted to CNA a particularly memorable experience a scene in which his character hides behind a curtain, acting like a child.

“There was maybe a five-year-old child in the front row who, when I jumped out of the curtain, burst out laughing, louder than anyone, any of the grownups had laughed in the whole show,” he recalled. “He laughed louder than anybody, and he just wouldn’t stop laughing.”

“And then what happened was the rest of the audience started laughing at the little kid laughing at Hamlet. And, somewhere in that was a really beautiful bit of innocent play,” he said. “As an actor, you constantly try and strive to keep that sense of childishness, because, that’s when theater’s really alive: when it’s playful, and childish.”