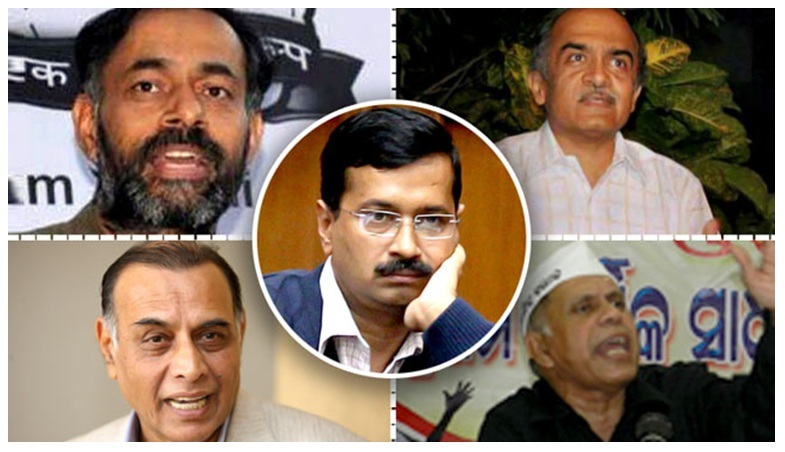 (Note: AAP was formed on Nov.22nd 2012. It attracted national attention and reached the zenith of glory with the Delhi elections. This  victory also marked the  outbreak of factional feuds and ouster of two, then  four  prominent members, the latest,  from the party. The list  of others (a total 17 prominent persons) who left the party are given below. It looks a good number of intellectuals committed to high democratic ideals and principles are leaving the party. The fighting factions should learn to stop the war of words and walk the path of reason and persuasion learning from critics if the AAP is  to become an alternative political force in India today-James Kottoor)

The Aam Aadmi Party’s (AAP) expulsion of rebel leaders Prashant Bhusan, Yogendra Yadav, Anand Kumar and Ajit Jha for anti-party activities is just the latest controversy to hit a party that has seen many loyalists and believers leave since its formation less than three years ago.

The decision to sack the four leaders was made on Monday night by the national disciplinary committee, which said as it was not satisfied with the response it got to a show cause notice served to them.

The rebels were issued show cause notices on April 17 to explain why they had organised a 'Swaraj Samwad'.The party, whose formation was announced on Gandhi Jayanti in 2012 and which was formally named the Aam Aadmi Party on November 24 that year, has seen many stalwarts leave in recent years.

AAP members who were closely associated with it from the very beginning have either been expelled over “disciplinary issues” or have quit, blaming the top leadership for not working in a democratic manner.Here is the list of AAP leaders who once were in Kejriwal's A-team but are no longer in the party:

Yadav has been a senior fellow at the Centre for the Study of Developing Societies (CSDS) since 2004. He is a former member of the University Grants Commission (UGC) and National Advisory Council (NAC) on Right to Education Act (RTE) appointed by the United Progressive Alliance government.

In 2011, he took part in anti-corruption protests led by Anna Hazare and later joined the AAP. Upset over AAP's decision, Yadav said he feels like he has been ejected from his own home.

"I am not surprised as from the past few days the matter was moving in such direction. Though I also cannot deny the fact that I am hurt by it. How would you feel if someone drags and throws you out of your own house," he said.

Bhushan, a noted lawyer, is known for his use of public interest litigations to support causes related to corruption, environmental protection and human rights. He was a prominent member of the India Against Corruption (IAC) movement that supported Anna Hazare's campaign for the implementation of the Jan Lokpal bill.

In 2012, he joined the AAP, saying that other parties were corrupt. A day after being expelled from the AAP, Bhushan hit out at former party colleagues and said that "those who have expelled us face serious charges themselves".

Kumar is a retired professor of sociology at Jawaharlal Nehru University and a founding member of the AAP. Kumar contested the 2014 Lok Sabha elections from North East Delhi constituency only to come second.

Kumar is the national convener of the steering committee of 'Swaraj Abhiyan' – a non-political movement set up by Yadav and Bhushan to establish 'swaraj' (self-rule) in the cultural, political, economic and social fields.

Once in Kejriwal's A-team, Jha has been expelled for his alleged anti-party activities. Jha was a professor in Delhi University and actively worked with the NGO Lok Rajniti Manch in recent years. He was also associated with the political organisation Samajvadi Jan Parishad.

On March 11, Damania, an AAP leader from Maharashtra, resigned from the party after a TV channel aired a sting of party convenor Kejriwal allegedly trying to buy out Congress MLAs last year to form government in Delhi."I quit… I have not come into AAP for this nonsense. I believed him. I backed Arvind for principles not horse-trading," Damania tweeted.

Binny stormed out of the AAP in January 2014 after he was denied a ministerial berth. He then called Kejriwal a dictator. Binny joined the Bharatiya Janata Party in January this year.

National executive member Agarwal quit the party in March 2014, saying it had become "directionless" and functions like a private limited company. In a letter to Kejriwal, Agarwal, who was associated with the party since its founding, said he had joined the AAP for its strong principles, but the goals for which it was created were getting lost.

Bhaduri, an ex-diplomat, quit the AAP and condemned the Khirki extension case in which Somnath Bharti, then Delhi’s law minister, undertook a midnight raid on the residence of some Ugandan women. Bhaduri said she was displeased with the way the party treated women.

AAP's national council member Upadhyaya, who was expelled for anti-party activities, left the party with 2,400 workers in April 2014. After quitting, Upadhyay accused the party of "parachuting" in candidates and deviating from its goals.

A member of AAPs’ national council, Qazmi quit in April 2014. He had called Kejriwal's outfit a “fraudulent entity”.

Illmi, who was one of the founding members of the AAP, resigned in May 2014 and said the party has deviated from its core issues. Ilmi said the "lack of inner democracy" triggered her resignation. "There is a crony clique that runs the AAP," Ilmi told a news conference where she announced her decision. She said while Kejriwal talked of 'swaraj, the party itself was undemocratic and decisions were being taken in an arbitrary manner.

Gopinath resigned from the AAP in May 2014, saying he had a series of differences on matters with Kejriwal. "I am not in favour of the recent actions of Mr Kejriwal, and have decided to quit. The party head cannot just shoot and scoot in politics," he had said.

Dasgupta resigned long before the Delhi assembly elections in 2013. Dasgupta, a member of AAP's national council, cited lack of internal democracy while resigning and accused Kejriwal of manipulating facts for political convenience.

Thakur, a member of AAP’s unit in Lucknow, resigned after the infamous Shazia Ilmi sting operation came to light. Thakur did not hold any prominent post in the party but his resignation just before the Delhi assembly elections exposed major chinks in the AAP's armoury.

Kazmi, a national council member of the AAP, resigned midway through the Lok Sabha elections. He questioned the party's decision to give tickets to Gul Panag, Meera Sanyal and Ashutosh. Kazmi and claimed the AAP was being hijacked by a few persons who were calling the shots.

Noted anti-nuclear movement activist Udayakumar quit in October 2014. The reason he gave for his departure was that he felt the party was not sufficiently paying heed to people and issues related to Tamil Nadu. Udayakumar had only joined the party in March 2014, and contested the Lok Sabha elections, albeit unsuccessfully.

A former AAP legislator and speaker of Delhi assembly, Dhir left the party in November 2014. He said Kejriwal, who ruled Delhi for 49 days, did not deserve a second chance.