This is the extract of the Presidential address given by Dr MP Mathai, Professor (Retd), Gandhian studies, Gujarat Vidyapeet, during the first national convention of 'KCRM – Ex-priests, Nuns association' held at Kochi  on 28th Feb. 2015. 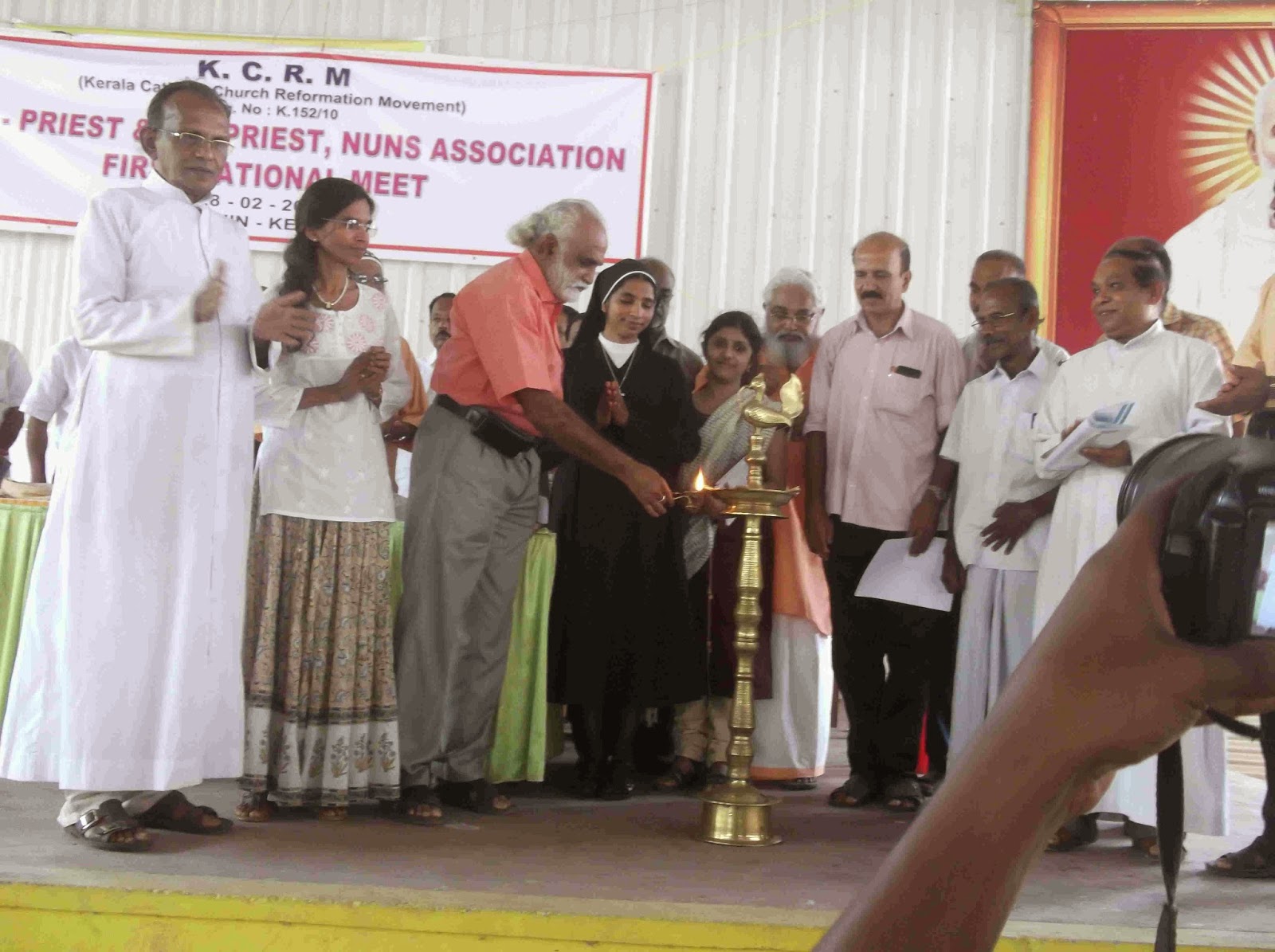 Oh bold seekers of truth!
I, who am a husband and father to two kids, have never been a priest or even a Catholic. I am a Syrian Orthodox Christian. Though I had progressed across theism and agnosticism to the very frontiers of rationalism, my intellectual life at this stage does not dictate me to denounce the faith in God. Ever since my dear friend George Moolechalil and his colleagues launched KCRM, I have been an invitee as an
observer in the meetings. Though I am here as an observer, when I was asked to deliver a speech it pleased me because I have a point or two to share with you. I intend to allude to two issues taking only ten minutes.

The people assembled here are, I suppose, those who have gravely reflected on the seminal question: ’why do we live?’ Most of you have burst out of the cloistered life of priesthood realizing that it is difficult to live out a meaningful and fruitful life within the confines of priesthood in the organized church. The basic problem of the churches is that they are not ready to accept or respect the fundamental liberty of man. The basic instinct of man is curiosity – the search for truth. His mind is never satiated by anything less than truth. Therefore every self conscious man will be on an adventurous, intense and consistent pursuit of truth. Man’s duty is to find truth, acknowledge it and chart out his life I have delved deep into the life philosophy of Gandhiji. For the last one decade I have been into Christology. Both Gandhiji and Jesus Christ had visions based on truth. Gandhiji speaks about two levels of truth. One is
absolute truth and the other is relative truth. Every individual has to live out his life as per the relative truth being unfolded to him. When we progress on the course of life, we will stumble on new relative truths. Accordingly we have to change our attitude. This does not amount to negation of truth. These could be assimilated as distinct stages of the search for truth – distinct levels of truth.

Gandhiji had emphasized this lesson in the search for truth. However, our church authorities have not ever been able to stomach this. Once I had taken a class at Mangalappuzha seminary. One of the senior students in the class, who had studied philosophy and theology asked me in private whether I was an atheist and confessed that he had lost his faith. He wanted to know whether he was in the wrong as an atheist. I had asked almost the same question to Paul Campbell who was the leader of Moral Re-Armament Movement. He answered, ’leave this question to God and He will solve it for you.’ I gave the same answer to the student. (Now he is a priest) There is nobody in the seminaries with the candor to openly discuss these and give vent to his inner turmoil. This negation of a forum blunts the search for truth. This is the limitation of the church establishment. When new levels of truths are dawned on you,
don’t be confused that you have been wrong hitherto. All these are the discrete stages in the search for truth. Even when you know that you are wrong, if you adamantly stick on to what is wrong, is wrong. This attitude that kills the inner light is hazardous too. But  churches essentially promote this method. They dread that the church will be in peril if blind obedience is not imposed.

When the controversy on the play ‘The sixth holy wound of Christ’ by P. M. Antony was raging, I had quoted Christ in a discussion, ‘woe to those who are weak in faith, wherefore do ye fear?’ A true Christian cannot be shattered by a play. The basis of the diffidence of the churches is that they are bereft of the absolute faith expected of them by Christ. Books are coming out even on the sexual life of
Christ. But they will not deter the true seekers of truth. It is better by far to walk out on the church if it helps one get more insight into Christ.

Dominic Crossan, who authored ‘Jesus – a revolutionary biography’ is a good example. He was once a catholic priest and a theologian and all that and came out of the church to write this book which gives me great inspiration in the study of the Christ.

As a follow up, it is necessary to present the problems of the ex-nuns and priests before the civil society and the church hierarchy. This has to be done gracefully, ensuring the cooperation of all sections. Even if it is based on firsthand experience, if we yield to the temptation to provocatively criticize the evil elements in the church and thus attract media attention, it may prove to be counterproductive. Such a method, I guess, is undesirable. Though truth is to be exposed without fear, it has to be presented in a
balanced and dispassionate manner to get the attention of the general public and the social scientists. As Narayana Guru has made a pertinent observation:’ it is better to fail on the side of truth than to win on the side of untruth.’ Here the Guru points out a matter that is against the social grain. Our wonted attitude is an easy Faustian deal – the end justifies the means. This legacy we pass over to the growing generations too. Even the very thought of failure is unpalatable to us. Therefore, as David met the giant with his puny sling and solid faith, with absolute faith in the providence, ensuring the support of all sections of the society, we should present our case. When we present this to the catholic hierarchy which demands blind obedience, we have to find inspiration in Jesus Christ who has pointed out that nothing is impossible to God.

The precedent that small meetings like this snowballed into the movement that empowered Gandhiji to win independence for India and destroy the British colonialism through non-violent means, should tantalize us. I hope that KCRM, which stands on the side of truth with resolve and cold determination, would succeeded in this struggle. And I for one, offer all support and cooperation in this, that I am worth.