(Note: A young couple, originally from Pakistan, both well educated and steeped in religious rituals, US citizens, leaves their 6-month old daughter with her grandma and goes out for a shooting spree, kills 14, wounds 21 and get killed. What is the psychology that prompted them? Until this root cause is detected and treated the present day terrorist attacks linked to ISIS spreading fear around the world is not going to go away, it looks. So what is needed urgently is brain power and moral power not muscle power or military power, to detect the root causes of this disease. You and I may have it left buried in the depth of our souls. “Feathers like straw on the surface flow, those who look for pearls must dive below,” said Dryden. So shouldn’t we all make an attempt at this diving, in the spirit of Nishkamakarma instead of looking for scapegoats to blame? Memorizing Quran or Bible or Gita need not necessarily make one a spiritual person. How can you and I help in this treasure hunt to make this little globe a safer place to live in for innocent children without fear? James kottoor editor)

SAN BERNARDINO, Calif. — Syed Rizwan Farook and Tashfeen Malik met online and married two years ago, after he presented himself on a Muslim dating site as a devout young man who liked to fix cars and memorize the Quran. They registered at Target when Ms. Malik became pregnant, with a cheery newlyweds’ catalog of wishes: a car seat, diapers and safety swabs.
But for all the outward signs of suburban normality, this couple, according to the police, used their comfortable home in a middle-class community near here to stockpile weapons and build pipe bombs. And on Wednesday morning, they left their 6-month-old daughter with her grandmother before heading to a holiday party with Mr. Farook’s co-workers where, the police say, they killed 14 people and wounded 21 others. A few hours later, they died in a crush of bullets in a brutal face-off with the police.
As investigators puzzle over their motives, the couple — the husband born in Illinois and raised in Southern California, the wife born in Pakistan and recently living in Saudi Arabia — have emerged as one of the most perplexing pairs in the recent history of mass homicide. Their lives, and motives, remain mysteries to investigators, who are looking at possible ties to international terrorism but have not ruled out the possibility that this was the bloody culmination of a workplace dispute. 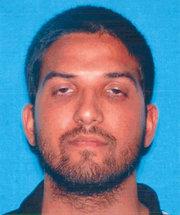 Syed Rizwan Farook, one of the suspects in the San Bernardino, Calif.,
shooting. Credit California Department of Motor Vehicles

Mr. Farook and Ms. Malik were observant Muslims, described by friends as quiet and unobtrusive. Mr. Farook, 28, who was a lanky six feet tall and had a full beard for long periods of his life, graduated from California State University, San Bernardino, with a degree in environmental engineering. He worked for the San Bernardino County health department, checking food surfaces at restaurants and bakeries and chlorine levels in public swimming pools.
Far less is publicly known about Ms. Malik, 27, who lived with Mr. Farook and his mother in Redlands, about five miles from where the attack took place. Mr. Farook brought her to the United States in July 2014, with a Pakistani passport and a K-1 visa, which designated her his fiancée. He applied for a permanent resident green card for her in September 2014, and she was granted a conditional card last July after passing a background check.
In registering for one of two dating services he used, Mr. Farook said he spoke Urdu, though friends said the couple spoke to each other in English. Mr. Farook, in a posting on one of the dating services, said he was open to dating a woman of any faith but was looking for “someone who takes her religion very seriously and is always trying to improve her religion.”
Mr. Farook was well known in the religious Muslim community here. From 2012 to 2014, he showed up twice a day for services at the Islamic Center of Riverside, sometimes as early as 4:30 a.m. and again in the evenings, said Mustafa H. Kuko, the director of the center. In a mosque where attendance on Fridays regularly tops 1,000, Mr. Farook stood out as one of the most devout members, wearing long robes to Friday services.
In the aftermath of the San Bernardino shootings, coming close on the heels of the Colorado killings, The New York Times invited people to respond online about their fear of a mass shooting. More than 5,000 wrote in. In addition, many others were interviewed on Thursday around the country: teachers and students and office workers, even some Army veterans who confided that they felt safer in war zones than on the streets of the United States.
People spoke of being spooked by gestures once ignored as utterly unremarkable. As one young woman from Massachusetts put it: “The guy in the corner always looking at his watch or the woman reaching into her bag too quickly.” Of course the man is probably wondering where his date is already. Of course the odds are the woman simply heard her cellphone vibrate. But is it? Could it be? Must I run?
****************************