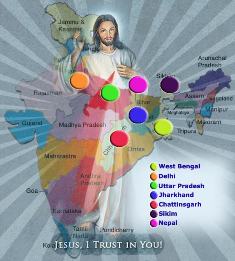 Bhubaneswar (By: Santosh Digal – Matters India): The Daughters of Mary Help of Christians, popularly known as Salesian Sisters opened their first house in Kandhamal, a district in Odisha state that witnessed the worst anti-Christian violence India witnessed seven years ago.

The house was opened as the Church in Odisha is preparing to observe the seventh anniversary of the 2008 anti-Christian mayhem that claimed more than 100 lives and rendered some 50,000 homeless.

The house belongs to the FMA Province of Mary Help of Christians Kolkata,.

“Salesian Sisters have joined in our missionary journey and started their first community at Kurtumgarh parish. On behalf of the archdiocese, I welcome the Sisters whole heatedly and wish them a fruitful ministry for the development of our people and building up of God’s Kingdom,” said Archbishop Barwa, who was a member of the Society of the Divine Word.

About 1500 people from far and wide, including Hindus and Christian of other denominations attended the event and shared the fellowship meal, said Father Jugal Kishore Digal, parish priest.

The Salesian provincial, Sr. Rose Ezarath, who was present, noted that the new convent was “a special gift” from their founder St John Bosco during the bicentenary of his birth anniversary. “A long cherished dream has been fulfilled,” she added.

The new convent has three nuns who started their mission on the same day of the opening.

The vision of the province is to become evangelizing educators like Don Bosco for modern young people. The convent aims to become “a sign of the foreseeing love of God and motherly care of Mary Help of Christians to the young people of the working classes, especially of the poorest through educative and promotional activities, both in Christian countries and in those not yet evangelized.”

The Salesian Sisters or Figlie di Maria Ausiliatrice (FMA-) work with the young and the poor in 92 nations within the five continents. Founders are: St. John Bosco and St. Mary Domenica Mazzarello.

Originated on August 5, 1872 at Mornese in Italy, the congregation began its presence in India in 1922. The FMA has its provinces in Chennai, Shillong, Mumbai, Kolkata, Bangalore and Guwahati.

The Salesian Sisters share Christ’s mission in the Church especially through Christian education in the style of the Preventive system – a system of loving kindness, drawn from the heart of Christ Himself—“We are a family united in Christ, To witness, to serve, Reaching out to the young, In every part of the world.”

The Kolkata FMA province was formed in 1987. They now work in 24 centers spread out across seven states of Chhattisgarh, Delhi, Jharkhand, Sikkim, Uttar Pradesh, West Bengal and the neighboring country of Nepal. Odisha is the latest state with its new presence.