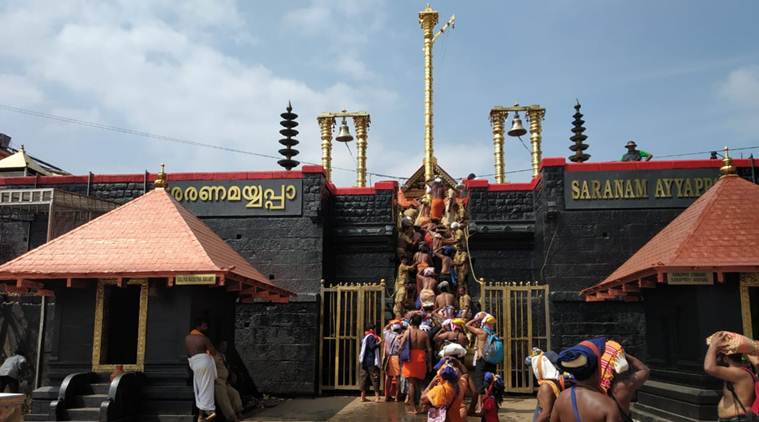 According to the leaked tapes, when the head priest of Sabarimala asked Pillai whether locking the sanctum sanctorum to prevent young women from entering would be “contempt of court”, he responded in the negative.

Note: Conundrum means a very difficult, complicated problem — moral, social or political — to handle or solve.  A very simple explanation for what is happening at Sabarimala is ‘old habits die hard’; what is learned with our mothers’  milk is hard to give up. Religious beliefs and  practices belong to this group. Hence also the saying: Old is gold.

It is about such practices  Pope Francis also said at the Youth Synod, “that this has always been done this way” need not be the right way. Hence all the present conflict between faith and reason. Religious beliefs differ from person to person, especially when persons are born in different religions having their distinct belief systems. Hence the universal principle on Freedom of expression and opinion which is every one’s birth right. Religion or (Matham, in Malayaalam} literally means opinion.

Among the multiplicity of religions in the world there is none which does not have some ‘blind beliefs’ and practices which are baseless and irrational and needs to be corrected. Why, aren’t there many atheists? For that reason does any one condemn them? Even the Pope considered to be the most religious person enters into dialogue with them and says: “Mine is not a Catholic God.” Only to the extend people are educated and enlightened, irrational practices can be corrected.

In the article below, Jaffrelot, in the Indian Express, gives umpteen examples, of how social reformers had to struggle with many of them in the past. Such were cases like abolishing Sati. remarriage of Hindu widows, untouchability, Age of Consent Bill, Caste system and so forth. There is always  conflict between conservatives and liberals, traditionalists and reformers. Some of them still remains to be wiped out.

Slow and steady to win!

Today the center of controversy is Sabarimala and temple in Ayodhia. Supreme court judgment on Gender Equality is a momumental gift to the nation, all agree. Only the BJP and RSS who want to use them to gain political milage, are not able either to swallow or spit it out. So we have to be patient and rational in dealing with them. Slow and steady will win the race, as the saying goes: “Fortiter et suaviter”(courageously and sweetly). james kottoor, editor ccv.

India’s liberals who are torn by dilemmas because of the intricacies of the Sabarimala affair may factor in three historical-constitutional variables in order to look at the present situation with a clearer perspective.


First, reformers have always had to face opposition when they stood against socio-religious traditions. Rammohan Roy, the first Indian reformer of the modern era, had to fight conservatives for abolishing Sati. Ishwar Chandra Vidyasagar, who fought for the remarriage of Hindu widows “died a disappointed man”, according to Surendranath Banerjea (1848-1925), who even considered in 1925 that “the lot of the Hindu widow today remains very much the same as it was 50 years ago”. Mahatma Gandhi had to put moral pressure on the members of his own ashram, even of his own family, to persuade them to fight untouchability — a battle even he did not take to its logical conclusion. Reformers are lonely figures. On the resilience of social conservatism at the expense of reformism, see last year’s special issues of Studies in Indian Politics.

Second, some liberals who are uncertain about the right attitude in the Sabarimala case assume that the people’s opposition is spontaneous, while it largely results from the instrumentalisation of traditions by ideologues. Historically, one needs to distinguish pure conservatives — who believed in sanatan dharma, like Madan Mohan Malaviya or Swami Karpatriji, from traditionalists who defended ancient practices in the terms of identity politics, like Bal Gangadhar Tilak. Tilak’s worldview is well reflected in the controversy around the Age of Consent Bill — a bone of contention similar to the Sabarimala affair. At the end of the 19th century, western India debated the issue of legislating on the age of consent for consummation of marriages. While reformers including Jyotirao Phule were in favour of a law to abolish child marriage, Vishwanath Narayan Mandlik and Tilak were not — for two different reasons. The former, like the Sanatanists, considered that child marriage should continue because the shastras allowed such practices. Tilak offered a different perspective. On one hand, he argued in 1881 that “every son of Aryavarta must toil hard to see this custom eradicated”; on the other, he refused any change to tradition: “We would not like that Government should have anything to do with regulating our social customs or ways of living, even supposing that the Act of Government will be a very beneficial and suitable measure.”

Tilak should have been torn, but he preferred to mobilise “the people” against a reform he approved of, in order to promote his political agenda. Tilakism marks the entry of national-populism on the Indian public scene as he’s the first one to openly use religion in politics. One of the Kesari’s editorials, in 1896, reads: “Why should we not be able to convert religious festivals into political mass rallies?” The Tilakites tried to transform the erstwhile privately-organised Ganesh festival into an ethno-nationalist celebration, as another editorial of the Kesari admitted: “Religious thoughts and devotion may be possible even in solitude, yet demonstration and éclat are essential to the awakening of the masses. Through this nationalist appeal, the worship of Ganapati spread from the family circles to the public square.” Note, the masses have to be not followed, they have to be “awakened”; their sensibilities do not come first, they have to be shaped in the course of ethno-religious mobilisations.

Today, the Sangh Parivar is applying the same techniques in the Sabarimala affair as evident from what the BJP Kerala state unit chief, P S Sreedharan Pillai, declared recently, according to the tapes which were leaked to the media: “Sabarimala is a golden opportunity. It is an issue. Settling the Sabarimala issue in a straight line is not possible. We put forward an agenda and everyone else surrendered to it leaving only us and our enemies, the government and its parties.”

Pillai also said that the BJP planned the whole protest when the temple was opened last month: “Our BJP secretaries had gone to a (decided) place and carried out what they were supposed to do successfully. When Sreejith IPS went to Sabarimala with two women, it was a Yuva Morcha leader who assembled devotees and stopped them. The outside world doesn’t know all this.” The nation does not need to know the background because a people’s mobilisation needs to appear spontaneous.

Third, besides politicising a religious issue, Hindutva forces have openly opposed a decision of the Supreme Court. The party in office, usually, observes a separation of powers and the rule of law. Not in this case. According to the leaked tapes, when the head priest of Sabarimala asked Pillai whether locking the sanctum sanctorum to prevent young women from entering would be “contempt of court”, he responded in the negative. He claimed, “if the court decides to take contempt of court action, then it would be against us first”. He also told him that he would not be alone, “there would be thousands of people”. The manner in which Pillai poised the masses against the judiciary is typical of populism.

Sabarimala is not the only case in point. Recently, the Sangh Parivar has also criticised the attitude of the SC in the Ayodhya case. Last month, the Akhil Bharatiya Sant Samiti (ABSS) convention, that asked the Modi government to pass a law to build the Ram Mandir, also attacked the judiciary as “full of anti-temple people”, according to one of the speakers. RSS general secretary Bhaiyyaji Joshi regretted that the Ram Mandir was not a priority for the SC, stating that “Hindus are feeling insulted” at a press conference.

In both the Sabarimala and Ayodhya cases, what is at stake is the prestige and authority of the SC vis-à-vis entrepreneurs in identity politics who use traditions in order to mobilise and polarise — a member of the ABSS convention warned that “no one can stop communal riots”.

If the SC judgement cannot be implemented, it will not only be a victory for ethno-religious political entrepreneurs at the expense of social reform, but also a defeat for the rule of law. When such signals were sent to street demonstrators in neighbouring countries, those who were prompt to take the law into their hands in the name of religion were emboldened. So, where is the dilemma here?

* Christophe Jaffrelot is senior research fellow at CERI-Sciences Po/CNRS, Paris, professor of Indian Politics and Sociology at King's India Institute, London, and non-resident scholar at the Carnegie Endowment for International Peace.  He offers valuable insights on South Asian politics, particularly the methods and motivations of the Hindu right in India.