Russia and India 70 years together

We are proud our specialists helped develop India’s space program. Thanks to this fruitful bilateral cooperation, in 1975 India’s first satellite, Aryabhata, was launched, and Indian citizen Rakesh Sharma travelled into space in 1984 as a crew member of Soyuz.

This year, we are celebrating the anniversary of a truly historic event. Seventy years ago – on April 13, 1947 – the governments of the USSR and India announced their decision to establish official missions in Delhi and Moscow. This step on our part logically followed up on our course for assisting India on its way to national liberation and contributed to strengthening its independence.

(Note: Vladimir Putin is the President of Russia.It is always nice to hear from the mouth of the  president of Russia on the occasion of completing 70 years of beneficial historic cooperation.In politics and international relations there are no permanent friends of foes, only permananet national interests.

Some of the instances through which Russia helped to speed up the industrialization of India are the setting up of: “metallurgical complexes in Bhilai, Visakhapatnam and Bokaro, the mining equipment plant in Durgapur, the thermal power station in Neyveli, the electromechanical enterprise in Korba, antibiotics plants in Rishikesh and the pharmaceutical plant in Hyderabad.”  For more continue reading. james kottoor, editor)

In the decades that have followed, our bilateral partnership has further intensified and strengthened, and has never been subject to expediency.

Equal and mutually beneficial relations of the two States have steadily developed. This is quite natural. Our peoples have always had mutual sympathy and respect for each other’s spiritual values and culture.

Today, we can take pride in what we have achieved. With Russia’s technical and financial assistance, the pioneers of Indian industrialization came into existence: metallurgical complexes in Bhilai, Visakhapatnam and Bokaro, the mining equipment plant in Durgapur, the thermal power station in Neyveli, the electromechanical enterprise in Korba, antibiotics plants in Rishikesh and the pharmaceutical plant in Hyderabad.

Soviet and, later on, Russian scientists and academics participated in the establishment of research and education centers in India. These include the Indian Institute of Technology in Bombay, research institutes of petroleum industry in Dehradun and Ahmedabad.

In August 1971, our countries signed the Treaty of Peace, Friendship and Cooperation, which set forth the fundamental principles of bilateral relations, such as respect for the sovereignty and each other’s interests, good neighborliness, and peaceful coexistence. In 1993, the Russian Federation and the Republic of India confirmed the inviolability of these basic principles in the new Treaty of Peace, Friendship and Cooperation. The Declaration on Strategic Partnership signed in 2000 provides for close coordination of approaches to ensuring international peace and security and resolving pressing global and regional issues.

Annual summits have become an established practice in the Indian-Russian bilateral relations allowing us to discuss in a timely manner the efforts taken to accomplish our objectives and set long-term goals. In early June, we will have another summit with Prime Minister Narendra Modi in St. Petersburg. He is expected to attend the St. Petersburg International Economic Forum, in which India will for the first time participate as a partner country.

The legal framework comprising more than 250 documents is being updated on a regular basis. Effective work is carried out within intergovernmental commissions on cooperation in trade and economy, science and technology, as well as culture and military-technical field. Ministries of foreign affairs, security council offices and line ministries maintain continuous dialogue. The interparliamentary and interregional ties, as well as business and humanitarian contacts are actively developing. Military cooperation is also being enhanced: joint land and naval exercises are conducted regularly.

Cooperation in peaceful uses of atomic energy is one of the fundamental components of the relationship between India and Russia. The construction of the Kudankulam Nuclear Power Plant with our assistance is a flagship project in this field. In 2013, the first nuclear power unit was put into operation. In October 2016, the second unit was transferred to the Indian side, and construction of the third and fourth power units began. All of this contributes to the implementation of the plans to develop nuclear energy in India involving the construction of at least 12 power units in its territory by 2020.

These goals are stipulated in a joint document – the Strategic Vision for Strengthening India-Russia Cooperation in Peaceful Uses of Atomic Energy. We intend to further share best practices in this important industry with India and contribute to enhancing its energy security. 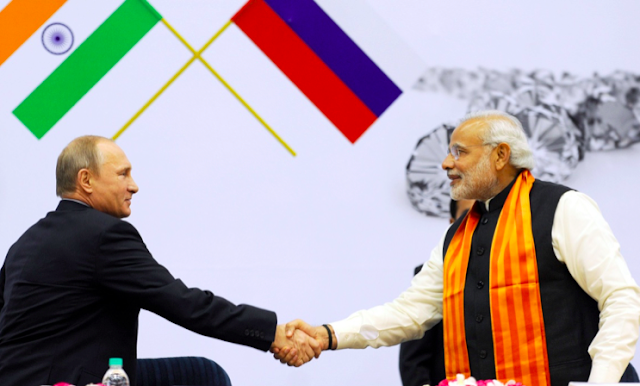 Collaboration in the traditional energy sector is successfully developing. The purchase of a block of shares in the Russian company “Vankorneft” made by the Indian consortium of companies has become the biggest bilateral deal in the oil industry. The possibilities for the participation of Indian companies in joint hydrocarbons exploration and production projects in the Russian Arctic shelf are currently under consideration. There are also good prospects for cooperation in the solar energy filed, modernization of the existing power plants and construction of new ones in the territory of India.

Large-scale projects are carried out in mechanical engineering, chemical and mining industries, aircraft construction, pharmaceutics and medicine.One of the priorities is to boost the trade turnover and improve its structure, as well as stimulate economic activity of our business communities. I am referring to enhancing industrial cooperation and increasing supplies of high-tech products, creating a better business and investment environment, and using systems of payments in national currencies.

The decision to start negotiations on a free trade area agreement between the Eurasian Economic Union and India adopted in December 2016 is of particular importance. The possibilities of creating the International North South Transport Corridor are being explored. All these factors should promote the development of our bilateral and regional cooperation.

To encourage reciprocal capital inflow, a working group on priority investment projects was established under the Inter-Governmental Commission on Trade, Economic, Scientific, Technological and Cultural Cooperation. 19 most promising projects have already been selected. Russia is committed to long-term participation in the “Make in India” program initiated by Prime Minister Narendra Modi.

Our countries cooperate intensively in the production of multipurpose weapons and military equipment. Co-production of a unique supersonic cruise missile “BrahMos” is our special pride. Since 1960, the overall value of contracts within the framework of military and technical cooperation has amounted to over USD 65 billion, while the portfolio of orders in 2012-2016 exceeded USD 46 billion.

India and Russia are equal partners in international affairs. Our countries support the establishment of a multipolar democratic system of international relations based on strict compliance with the principles of law and resting upon the UN central role. We are willing to further jointly counter challenges and threats of the 21st century, promote the unifying agenda and contribute to maintaining global and regional security.

We effectively interact within BRICS – an association that thanks to our collective efforts is increasing its weight and influence. This June, India will become a full member of the Shanghai Cooperation Organization. It will considerably enhance the potential of the SCO. India and Russia also work together within the G20 and other international formats.

I would also like to note that our countries closely coordinate positions on such complex issues as settling the situation in Syria and ensuring stability in the Middle East and North Africa region. They significantly contribute to the national reconciliation process in Afghanistan.

I am convinced that the enormous potential of cooperation between the two great powers will be further explored for the benefit of the peoples of India and Russia and the international community in general. We have everything necessary to achieve this – political will of the sides, economic viability and shared global priorities. All this is based on the glorious history of the Indian Russian friendship.
Taking this opportunity, I would like to convey the kindest regards to all the citizens of friendly India.