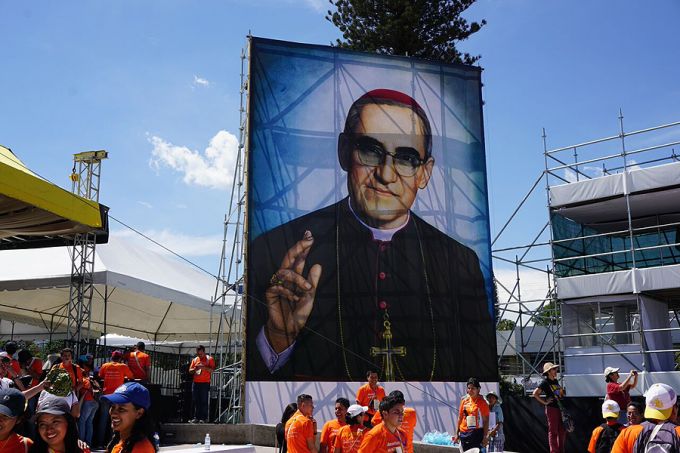 On 14 October  2018, Pope Francis canonised Archbishop Oscar Romero. In his homily during the ceremony, the Holy Father lauded Romero for leaving "the security of the world, even his own safety, in order to live his life according to the Gospel, close to the poor and to his people, with a heart drawn to Jesus and his brothers and sisters". He went on to add, "Let us ask for the grace always to leave things behind for love of the Lord: to leave behind wealth, the yearning for status and power, structures that are no longer adequate for proclaiming the Gospel, those weights that slow down our mission, the strings that tie us to the world".

Pope Francis has constantly upheld St. Oscar Romero as someone to be emulated. Speaking to the Bishops of Central America in Panama on 24 January 2019, he described the murdered Archbishop of San Salvador as, “no human resources manager”. Rather he was, “a father, a friend, and a brother. He can serve as a yardstick”.

Archbishop Oscar Romero was brutally gunned down on 24 March 1980, while celebrating the Eucharist in San Salvador.  He was a fiercely outspoken critic of his Government, the military and of the right wing elements of his country, for their continued oppression and exploitation of the poor. There has never been any doubt about who was responsible for his death. He took sides with the poor, the marginalised and the victims of injustices. His martyrdom made him a ‘Saint’ for millions of these. It was estimated that more than 250,000 were present at his funeral as a sign of gratitude to the man who did so much for them and whom they deeply loved.

As a young priest and even in his early years as a bishop, Romero was regarded as 'conservative', He was afraid to rock the boat and preferred to maintain the 'status quo'. He never wanted to be on the wrong side of the powerful of El Salvador.

Fr. Rutilio Grande, a Jesuit, was a good friend of Romero.  Grande left no stone unturned to highlight the plight of the poor and the oppressed and to make their struggles his own. Unlike Romero, Grande did not hesitate to take up cudgels against the powerful and other vested interests. On 12 March 1977, Grande was killed by the regime. Just three weeks earlier, Romero was appointed Archbishop of San Salvador.

Grande’s death came as a terrible shock to Romero. Presiding over the funeral Mass, Romero said, “The government should not consider a priest who takes a stand for social justice as a politician or a subversive element when he is fulfilling his mission in the politics of the common good.” He also said openly and emphatically, “Anyone who attacks one of my priests, attacks me. If they killed Rutilio for doing what he did, then I too have to walk the same path”. The death of his dear friend was a turning point in the life of Romero. From that day onwards, he wholeheartedly worked for the rights of the poor, until his own murder, three years later.

On 21 December 2010, the United Nations General Assembly, in a fitting tribute to Oscar Romero proclaimed 24 March as the International Day for the Right to the Truth Concerning Gross Human Rights Violations and for the Dignity of Victims. The purpose of this day is to:

India and the rest of the world desperately need to emulate Oscar Romero. Untruth and injustice, divisiveness and discrimination gains more ground in many countries. Several political, business and even so-called ‘religious’ leaders use hate, jingoism and xenophobia to nurture their lust for power and greed for wealth. Truth and Justice in several countries of the world are totally disregarded. Hardly any attention is paid to the victims of crime and violence – particularly the institutionalised ones. The poor continue to be the victims of unjust structures everywhere. Human Rights defenders are denigrated, hounded and even killed.

On the day when we celebrate the memory of this great saint, let his challenging words on his own reality, a few days before his assassination, awaken us to respond to our context today – "The church in Latin America has much to say about humanity. It looks at the sad picture portrayed by the Puebla conference: faces of landless peasants mistreated and killed by the forces of power, faces of labourers arbitrarily dismissed and without a living wage for their families, faces of the elderly, faces of outcasts, faces of slum dwellers, faces of poor children who from infancy begin to feel the cruel sting of social injustice. For them, it seems, there is no future – no school, no high school, no university. By what right have we catalouged persons as first-class persons or second-class persons? In the theology of human nature there is only one class: children of God.

St. Oscar Romero was truly a prophet: worthy of emulation in our broken world.