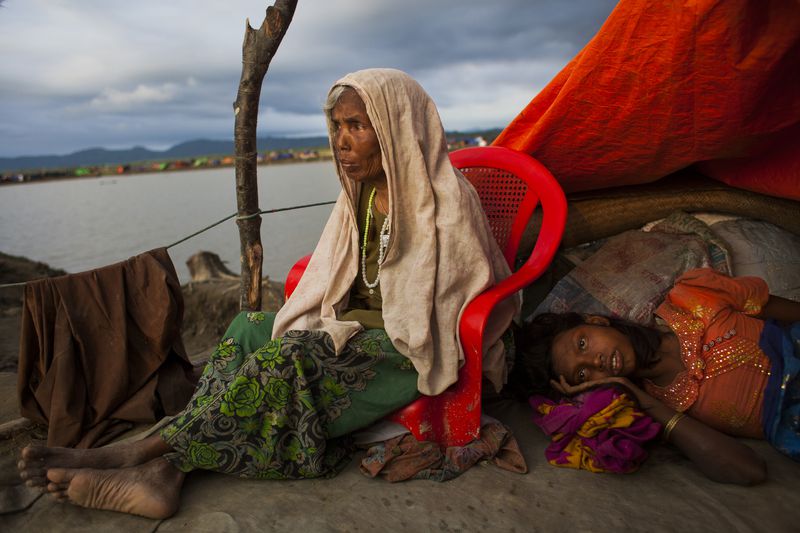 The ethnic cleansing of the Rohingya in Myanmar (Burma) is reminiscent of the genocide of ethnic Tutsis in Rwanda. Between April and June 1994, an estimated 800,000 Rwandans were killed in the space of 100 days. Most of the dead were Tutsis – and most of those who perpetrated the violence were Hutus. Persecution, neglect, and silence have deepened the Rohingya crisis in Myanmar. Long-standing demographic changes have pitted Buddhists against Muslims. With the world at large, including the petro-dollar rich muslim countries opting to sit on the fence, the situation is going out of hand.  Bangladesh and India have been suffering to cope up with the migration of Rohingyas.  The United Nations is doing little to mitigate the suffering and bring Myanmar to book.

The military calls the campaign a “clearance” operation against an insurgent terrorist military group. They claim the crackdown is in response to a series of armed attacks on border police by Rohingya militants on August 25 that left 12 officers dead, the second such type of attacks in the past 12 months. But observers say that though armed Rohingya insurgents exist, their overall numbers are small, and they are poorly equipped. And the crackdown has affected the entire ethnic group. Meanwhile, in a Facebook post  Gen. Min Aung Hlaing, the head of Myanmar’s military, was dismissive: “They have demanded recognition as Rohingya, which has never been an ethnic group in Myanmar.”

In the latest development, the USA is withdrawing military assistance units from Myanmar over the country’s treatment of its Rohingya Muslim minority in Rakhine state. The US state department said it had also dropped travel waivers for Myanmar military officials, and was considering economic sanctions. In this background, this article in La Corix International is a timely eye-opener on how refugee problems can totally upset the economy and security of developing countries like Bangladesh and India.  Isaac Gomes, Asso. Editor, Church Citizens' Voice.

Ethnic cleansing of the Rohingya in Myanmar has strong parallels with the genocide of ethnic Tutsis in Rwanda, one of the worst atrocities of modern times. 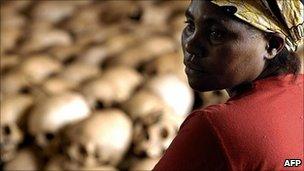 From April-July 1994, Hutu militias backed by the Hutu-majority government and military massacred up to one million minority Tutsis. The genocide was the culmination of long-time ethnic conflict in Rwanda, a small equatorial republic straddling central and eastern Africa.

It was triggered by the killing of then Rwandan Hutu president Juvenal Habyarimana in an April 6 rocket attack on his aircraft. Hutus blamed the Tutsi rebel Rwanda Patriotic Front (RPF) for the attack.

Then RPF leader Paul Kagame, who is now the nation’s president, alleged it was Hutu extremists who staged the assassination as a pretext for genocide.

The International community stood aside as mass killings took place before the U.N. belatedly intervened to overthrow the murderous regime.

Lighter-skinned and taller than Hutus, Tutsis are widely considered to originally have been immigrants from Ethiopia. Belgian colonists (1916-61) treated Tutsis as superior to Hutus.

In Buddhist Myanmar’s Rakhine State, the dark-skinned Rohingya – who have their own religion, language and culture – also face persecution. They were officially made stateless in 1982 when a military regime amended the nation’s Citizenship Act to exclude them.

The Rohingya were branded as "illegal immigrants" from Bangladesh. The main perpetrator of bloody repression has been Myanmar’s military, but they have had collaborators.

Rakhine Buddhists, who once saw the military as an occupying enemy, came to regard Rohingya as a common scapegoat.  And hate-mongering extremist Buddhist monks constantly inflame public sentiment against the Rohingya, including by concocted warnings of an "Islamic takeover" of Myanmar. 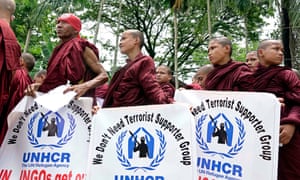 Buddhist monks protest against what they say is UNHCR support for Rohingya militants. Photograph: Nyunt Win/EPA

Promoting Islamophobia is part of a far-reaching political and economic agenda. The latest crackdown on the Rohingya following August 25 terror attacks on security checkpoints by Arakan Rohingya Salvation Army (ARSA) insurgents triggered an exodus of more 600,000 Rohingya to Bangladesh.

The ARSA attacks were used in an attempt to justify what the UN brands "ethnic cleansing" in Rakhine. It also acted as a distraction from the recommendations of a special report compiled by former UN Secretary-General Kofi Annan, who called for a review of the discriminatory 1982 Citizenship Act.

Thus the scene was set the slaughter and exodus of the Rohingya, perceived as an existential enemy along the same lines of what Hutus did to Tutsis in Rwanda.

Rakhine sectarian violence in 2012 radicalized Rohingya militants in the form of ARSA with attacks on Myanmar border police in October last year and again in August.

These are the key factors that have led to the most recent Rohingya exodus:

As in other parts of Britain's former colonial empire, so-called "divide and rule" tactics employed in what was then Burma reverberate to this day.  The British encouraged large-scale Muslim migration into Arakan, more commonly referred to now as Rakhine.

The primary motivations were political and economic, not least to secure profits from agricultural enterprises. However, the demographic change also pitted Buddhists against Muslims. and that division was evident during World War II.

Muslims fought for the British against a push for independence, while Buddhists supported Japan in order to help drive out the British colonial masters.

The British did withdraw in 1948, but communal divisions had widened.  Some Rohingya leaders opted to join Muslim-majority Pakistan while others became insurgents to fight the Burmese military. The military branded militants as "Bengali interlopers" who did not deserve citizenship.

The Rohingya were portrayed by the military to Rakhines as a common enemy in keeping with colonial Britain’s divide and rule approach.

The Muslim presence in Arakan (Rakhine), an independent kingdom for some 2,000 years, can be traced back to the 8th century.

Arakan’s prosperity, peace, and harmony have been eroded since a Burmese invasion and annexation in 1784 and British colonization of Burma in 1824.

The term Rohingya actually means "natives of Rohang", which is a Muslim name for Arakan. The very name "Rohingya" is a symbol of Muslim influence in the region that Myanmar wants to erase.

The British drew the borders of India and Burma before departing. However, cross-border migration continued. Pockets of Rakhine Buddhists still live in southern Bangladesh as citizens, something that has overwhelmingly not been afforded to Rohingyas in Myanmar.

The Rohingya have not always been welcomed in Bangladesh, with many who fled there in 1978 subsequently returning to Rakhine. In 1992, a deadly crackdown forced about 250,000 Rohingya into Bangladesh.

Eventually, most were repatriated through U.N. intervention, but about 30,000 Rohingya lacking personal documentation were left behind. Nonetheless, the Rohingya continuously trickled into Bangladesh. Even before the latest exodus, there were about 300,000 undocumented Rohingya refugees in the Muslim-majority nation.

Ordinary Bengali people of Bangladesh have traditionally been sympathetic to the Rohingya as their language, culture and religion are similar. However, successive Bangladeshi governments deliberately did not seek to improve their lives, fearing that doing so would encourage more to come.

In the same vein, local aid groups were discouraged from helping undocumented refugees.

Three international organizations: Doctors without Borders, Action Against Hunger and Muslim Aid UK were allowed to provide assistance. However, in 2012 Bangladesh sealed off the border and refused entry to boatloads of Rohingya fleeing sectarian violence in Rakhine.

The same year, all aid groups were banned from operating among undocumented refugees in the Cox’s Bazar area of southern Bangladesh.

The government of over-populated and impoverished Bangladesh defended that stance by saying it was not a signatory to a U.N. refugee convention and lacked resources to shoulder the burden.

By doing so, Bangladesh lost sight of its own past during the 1971 war of independence from Pakistan when millions of people were killed and about 10 million fled to India as refugees.

Bangladesh’s negligence has worsened the suffering of the Rohingya and forced them to travel to other countries using fake passports or undertaking perilous sea voyages. Faced with poverty, some Rohingya resorted to militancy or criminality, including drug trafficking.

Until 2012, the international community and media paid little attention to the Rohingya crisis. Even the Islamic world gave scant practical support to their beleaguered brethren.

The 2015 Asian "boat people" crisis finally put a spotlight on what had become a worsening crisis, but little was achieved by way of finding a long-term solution.

The tragedy came under scrutiny again last October when the military launched a deadly crackdown against the Rohingya after police border posts were attacked, spurring a large exodus into Bangladesh.

Western governments have hailed Myanmar’s Aung San Suu Kyi for her years of struggle to end military rule in Myanmar. But since becoming the nation’s de facto leader she has fallen from grace internationally for failing to act against violent military repression of Rohingya.

Western governments continue to play it safe by not harshly criticizing her, citing the army’s tight control over security and defense affairs. However, this international position is ridiculous given Suu Kyi’s popular mandate, the blessing of the West and foreign media attention.

She could at least act to stem the military atrocities while trying to avoid a confrontation with the army and attempt to influence domestic public opinion. Instead, she has largely remained silent and defended Myanmar's hegemony.

The international community has in turn done too little to hold Myanmar accountable. Powerful neighbors China and India continue to support Suu Kyi’s government in pursuance of their own political and economic interests.

Vladimir Putin’s Russia has done likewise and so far the United States has shied away from any concerted action. Muslim countries such as Turkey, Malaysia, and Indonesia have publicly challenged Myanmar’s treatment of Rohingyas.

But doubts remain as to whether these nations have genuine sympathy for Rohingyas or are merely using the issue to reap political dividends at home and abroad.

The time has come for all and sundry to face the Rohingya crisis head-on. History will be unforgiving if the plight of the Rohingya becomes akin to that of the Tutsis in Rwanda.

It is sad that geopolitical games are poised to decide whether many Rohingya live or die.

Rock Ronald Rozario Bangladesh is Bureau Chief for ucanews.com based in Dhaka.