Any Rite is all right to pray for following Man from Galilee! 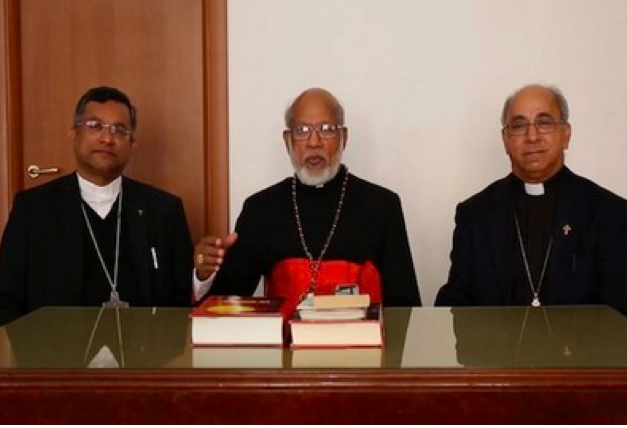 The great news, the good news is that Pope Francis has finally put an end to all Rite rivalries in India,  by wiping out the last vestiges of religious colonialism of the middle ages, that of the Portughese in India. (Read: Eastern Rite Rejoices, report below) He has affirmed the equality of all three  churches – Latin with a lion’s share of 132 dioceses, two Eastern churches, Syromalabar with 34 and Syromalakara with 14, all together making up  175 Catholic dioceses all over India.

What is more, he has stressed the equality in the right, duty and responsibility, in principle at least, of all three Rites in spreading the Good News, called Evangelization. This is but the extension of the equality of all the faithful  to serve one another as brothers and sisters, irrespective of their man-made hierarchical positions in the Church. More than equality, what is more vital in the church is that, if there is to be a competition among followers of Jesus, it is competition to serve one another, not dominate or rule over. It is to highlight this,  Francis has placed himself one step below the laity to deserve the title: Servant of Servants.

To serve, not lord over

With this move Francis has trampled underfoot the propensity of some, imitating James and John to sit on the right and left hand of Jesus as Prime Ministers. Will it put an end to all self-promotions by hook or crook, on flimsy grounds like family and caste positions in society, patronage and recommendations of those in positions of power and not spiritual excellence which alone should count for leadership? Human nature being what it is, the old order is bound to continue in a subdued manner at least for some time.

Till now there was competition and bitter rivalries between the three, the Latin Church giving step-motherly or better, step-brotherly treatment to two Eastern Rite Churches which were surviving like skeleton political parties in India surviving at the mercy of major parties like Congress, BJP, CPM(once upon a time) etc. Old habits die hard and so the tricks of the trade, like increasing one’s geographical control, production of Bishops (like MPs and MLs), one’s  clerical and religious personnel, and construction of eye popping Churches, educational institutions and super-specialty hospitals etc are bound to continue for some more time at least.

There would be hardly few to opt for the CATTLE CLASS party (or community) of the last, least  and lost of Jesus,  the poor of Yahweh. But there will always be “the Little Flock” who will not bend their knees before any insolent might. They will continue to exert their invincible might to transform society from within, like the salt and leaven in the dough.

Equality of Rites will become meaningful only when it leads to unity, universality, liberty, fraternity, transparency, meritocracy or capacity based one’s God given charisma which is like the heavenly shadow (God’s providence) chasing the humble and self-effacing who runs away from power and splendour like David, but chases those who runs away from princely and royal positions to rule over.

“Recedant vetera, nova sint omnia!” Let bygones be bygones, let bright new days dawn, is the clarian call  Francis  has sent out. It is good to remember here the words of Paul: “To preach the good news and not to baptize Christ did me sent.”(1Cor. 1.17) and also the words of Francis, the top Twiplomat (preacher of good news parexcellence) on Proselatisation too long to go into here. To evangelize like  Jesus or Francis one needs no Cathedrals or concrete wonders like Edapally Church, one needs only the Twitter to be where the people are listening. Jesus had no built up churches, not even a home. So shall we then say: “Morathorium to all Church  buildings?”

Any Rite all right!

But first and formost equality to all churches and Rites. This scribe wrote on Feb.14, 2011 on: Faith Crowds and Rite colonies in US: “Church is fellowship not groupism, to rule is to serve, not   lording it over,   evangelisation is not  colonisation, harvesting of  souls isn't cultivating  churches (Pallikrishi )  for reaping dollar harvest  ($ Koithu),   cross is for crucifying self not others, any Rite  is all right  to pray.” james kottoor,  editor ccv.

Eastern rite rejoices in right to administer across India Posted  in  UCANewsIndia, on October 11, 2017

Pope gives Syro-Malabar Church powers to evangelize outside its base in southern India.

Kochi: In a historic move, Pope Francis has extended the administrative powers of the Syro-Malabar Church across India, removing restrictions imposed since the arrival of Portuguese missionaries in the 16th century.

Announcing the establishment of two new dioceses for the Eastern-rite church in an Oct. 9 letter to all India bishops, Pope Francis also authorized it to have pastoral powers across India, a move resisted by the majority Latin-rite bishops in the past.

"With this, the church gets the freedom and rights for pastoral care of its faithful anywhere in India and to engage in evangelization activities across the nation," Cardinal George Alencherry, the Major Archbishop of Syro-Malabar, said while announcing the papal decision.

The church of roughly 4 million Catholics based in the southern India Kerala state, will exercise these newly gained rights in unity with India's larger Latin-rite Church, and the smaller Eastern-rite Syro-Malankar Church, the cardinal said in a webcast from Rome.

"This is a historic move," said Father Paul Thelakat, a senior priest of the church and its former spokesperson. "It removes administrative restrictions imposed on the church by Portuguese missionaries since the 16th century."

The church traces its faith back to St. Thomas the Apostle, who according to tradition evangelized the west Indian coast and maintained relations with churches in Syria. But Portuguese missionaries later "latinized" these Christians and restricted their activities to the Kerala region, Father Thelakat explained.

Emboldened by the teachings of the Second Vatican Council, which stressed the freedom and responsibility of Eastern-rite churches, the Kerala-based church’s clergy began working in several places outside Kerala. They often faced resistance from Latin-rite bishops.

Latin-rite bishops, who head 132 of India's 175 dioceses, maintained that establishing Eastern-rite parishes and dioceses in their territory would confuse Hindus in northern India who would interpret it as division among Catholics.
However, Pope Francis’ said in his letter that "overlapping jurisdictions should no longer be problematic, for the church has experienced them for some time, such as in Kerala."
Pope Francis said in a world where "large numbers of Christians are forced to migrate, overlapping jurisdictions have become customary and are increasingly effective tools for ensuring the pastoral care."

The letter added that the smaller Eastern-rite Syro-Malankara church already had provisions to provide "pastoral care for its faithful throughout the territory of India."
Syro-Malankara Church spokesperson Father Bovas Mathew told ucanews.com that the papal letter is a "milestone" in the mission history of India and had established beyond doubt the Eastern-rite churches right to evangelize.

With the additions, the Syro-Malabar Church has 34 dioceses in total, while the Syro-Malankara has 14 dioceses. The papal announcement, made at the plenary of the heads of Eastern Churches, comes on the silver jubilee of Syro-Malabar Church becoming sui juris, or self-governing, in 1992. The church was given powers to decide on its liturgy and administration, including the election of bishops and establishment of dioceses.

Bishop Theodore Mascarenhas, secretary general of the Catholic Bishops' Conference of India, which covers all three rites, said the papal letter stressed the unity bishops needed to show."The bishops are of course happy because it is all done for the growth and mission of the church," said Bishop Mascarenhas. (Source: UCAN)