Rising prices of Onions! Can the ‘Marie Antoinette’ of India’s Economy turn it around? 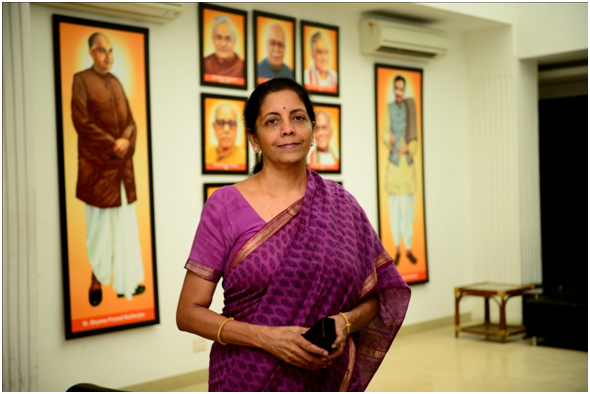 WHY YOU SHOULD CARE – Because the economy of one of the world's biggest countries is in shambles. By Maroosha Muzaffar, in The Daily Dose, Dec,15, 2019

Note: Indian economy is reported to be in shambles. If true all of us have to be much concerned about it. It was once in the gutter before and Dr. Manmohan Sing, the then Finance Minister, pledged all the gold India had to UK, infused fresh blood as in a dialysis patient and brought it back to normal health!

Today India looks like in the same condition, if not worse. The doctor treating the patient today is  Nirnala Sitharman. Is the problem facing India today is finding the right doctor? Writer Maroosha Muzaffar is giving his view below. Can she revive the economy? Look at her credentials and you judge for yourselves. james kottoor, editor ccv.

On a December morning when opposition members of Parliament questioned Indian finance minister Nirmala Sitharaman about the measures the government was taking to combat the rising prices of onions, her expression turned disdainful. “I come from a family that doesn’t eat much onions,” she said.

Sitharaman’s Marie Antionette moment, as branded by the opposition Congress party, gave rise to a flood of criticism tagging her as out of touch. Former finance minister P. Chidambaram asked if she ate avocados instead. To opponents, her comment also served as a reminder of her Brahmin privilege — many upper caste Indians avoid onions as studiously as they shun beef.

But the 60-year-old, one of only two female finance ministers in the G20 — alongside Indonesia’s Sri Mulyani Indrawati — faces a challenge far more complex than opposition criticism: turning around the trajectory of the world’s sixth-largest economy. India’s GDP growth rate slumped to 4.5 percent in the July–September quarter — low marks for the developing world. The unemployment rate is the highest in four decades. India has plunged from among the top three or four fastest-growing economies in the world to being outside the top 30 or 40, points out former World Bank chief economist Kaushik Basu, now a professor at Cornell University. And Prime Minister Narendra Modi’s promise of making India a $5 trillion economy by 2024, up from $2.7 trillion now, is fast turning into a pipe dream under Sitharaman’s watch.

That’s all surprising to Basu, who was chief economic adviser to Modi’s predecessor, Manmohan Singh, from 2009 to 2012. He says he didn’t know much of Sitharaman during his stint with the Indian government. But “she seemed like an intelligent, well-meaning person,” he says. “So I am totally baffled by her poor management of the economy.”

SITHARAMAN WAS NOT CHOSEN TO BE [FINANCE MINISTER] FOR HER IDEAS OR EXPERTISE. SHE WAS CHOSEN FOR HER LACK OF IDEAS AND EXPERTISE.

Sitharaman has much going for her. Even her critics admire her perseverance — and her rapid political rise. It was only 13 years ago that she joined the Hindu nationalist BJP and was a spokesperson until 2014, when she became commerce minister in Modi’s first government. Then, in 2017, she broke gender barriers as India’s first full-time female defense minister — and the images of her flying a supersonic fighter jet went viral.

Born in Tiruchirappalli in southern Tamil Nadu state, Sitharaman has a degree in economics and studied at Jawaharlal Nehru University, where, according to 2019 economics Nobel Laureate Abhijit Banerjee, they were friends. She then worked as an assistant economist in the Agricultural Engineers Association in the U.K., and as a senior manager with PricewaterhouseCoopers, London. Sitharaman was also a part of the National Commission for Women for two years. It was during this time that Sitharaman met the late BJP leader Sushma Swaraj, who — impressed with her outspokenness — became an important ally in the party.

She has also tried to portray a more everyday image, using Twitter to talk about her favorite saris and about how she used to make pickles at home.But to many analysts, Sitharaman’s credentials aren’t strong enough for the task she faces. “When it comes to the economy, Nirmala Sitharaman may be well-meaning, but unfortunately she doesn’t know her knee from her elbow,” says Sadanand Dhume of the conservative-leaning American Enterprise Institute. “The Indian economy is sputtering, and it’s not clear if this government has the faintest idea of how to turn things around.”

Not that she isn’t trying. In September, Sitharaman slashed the corporate tax from 35 percent to around 25 percent, in an attempt to attract investment. Yet it’s a move others have tried, and several economists have questioned whether India’s approach will work. After all, they argue, if consumers aren’t buying, investors are likely to wait until the market sentiment improves before putting more money in. She has also released $10 billion in capital infusion to public sector finance firms in a bid to boost lending. There’s little evidence yet that this move is working either.

That lack of fresh ideas is part of the problem. But it’s not surprising, suggests Dhume, in a government where ministers are largely expected to sing paeans to Modi, who has often introduced damaging economic policies without consulting economic professionals. Modi’s overnight ban on high-value currency notes in November 2016, for instance, brought the GDP growth rate down by about 2 percent. “Sitharaman was not chosen to be [finance minister] for her ideas or expertise. She was chosen for her lack of ideas and expertise,” says Dhume.

She hasn’t helped herself with serial gaffes — the comment on onions was just the latest. In the wake of India’s unfolding automobile industry crisis, she blamed the slowdown on millennials who prefer ride-sharing apps over buying cars. Soon, #BoycottMillennials started trending, and hundreds of anti-Sitharaman memes were churned out and shared on Twitter and Facebook.

Still, even with India’s savings and investment rates going down steadily and the growth rate expected to continue below 5 percent, Sitharaman has an opportunity, say experts. “India has huge fundamental strengths, and there is no good reason why the economy should stall. The slowdown is a tragic illustration of what politics can do to the economy,” Basu says, adding that with the right mix of fiscal and monetary policies, the country could return to high growth.

For that, he says, politics must be set aside and the Modi government must encourage the best professionals “to bring their ideas to the finance minister’s table,” he says. That would mean a break from Modi’s approach of pushing away Ivy League experts and relying instead on relative economic quacks. Modi has said he prefers hard work to Harvard.

“There is a trust deficiency in India, which is making this hard,” says Basu. “Can Nirmala Sitharaman correct this? All I can say is, I hope she can.”

Abdul Hamid AhmadHonestly, there's nothing wrong with Ms. Nirmala. US and China Biz Conflicts which make World Economic Turmoil. INDIA could easily Recovered after Biz War by 2 Giants. Give her the Trust and India's Economy should come back within 12 to 18 Months. All the Best to Ms. Nirmala…. You can do it and Keep Moving Ahead.