Right & wrong use of advertising! To fool the public and capture power!! 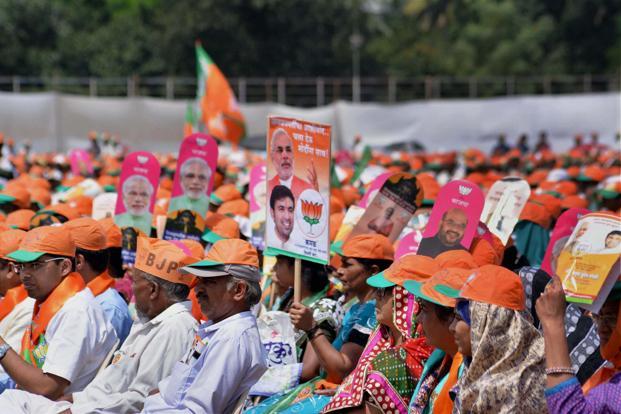 What is the difference between advertising and publicity? One captures public attention and support, by hook or crook, through  embellished  and exaggerated half truths in which the unthinking credulous get trapped and burned alive like flies jumping into a bright ball of fire, deceived by the enticing glow!

Publicity instead is projecting the whole truth unvarnished, and without exaggerating or hiding, as the Bible instructs: ‘Do not light your candle and put it under a bushel, but place it  on a lamp stand for the whole world to see and glorify the Father in heaven.’

This is an editorial comment on: “5 reasons why NDA allies may dump BJP before 2019" in yesterday's CCV.

Of course there is a popular dip and distaste for the Modi wave especially among the thinking sections of society, due to the divisive communal policies of the RSS-Hindutva brigade causing murderous conflicts in the name of religion, class, caste and touchy issues like cow protection, beef eating, love jihad etc. The votes of the poor illiterates can be easily bought by money power and advertising tricks used by all parties.

For the simple Indian masses Modi's image rose to the skies especially because of his numerous foreign trips to world capitals. This was unparalleled by any other PMs in India. Modi team also equals or surpasses even that of Hitler’s propaganda minister Goebbels. The victories in the regional elections is  living proof of his popularity among Indian masses.

Paul Joseph Goebbels  was a German Nazi  politician and Reich Minister of Propaganda of Nazi Germany from 1933 to 1945. He was known for his skills in public speaking and his deep, virulent antisemitism. He advocated progressively harsher discrimination, including the extermination of the Jews in the Holocaust.

“After the Nazi Seizure of Power in 1933, Goebbels' Propaganda Ministry quickly gained and exerted controlling supervision over the news media, arts, and information in Germany. He was particularly adept at using the relatively new media of radio and film for propaganda purposes. Topics for party propaganda included anti-Semitism and attacks on the Christian churches.

“Hitler committed suicide on 22 April 1945. In accordance with Hitler's will, Goebbels succeeded him as Chancellor of Germany; he served one day in this post. The following day, Goebbels and his wife committed suicide, after poisoning their six children with cyanide.”(See goggle search for more). Make your own comparisons between Hitler’s and Modi’s propaganda machinery.

More on foreign trips: ‘in the first 3 years Modi visted 49 contries in 21 journeys spending 275 crores and staying 119 days out of India and travelling a distance equal to circling the earth over 8 times. In contrast Manmohan Sing in ten years visited only 15 countries and made 73 foreign trips costing less than 671.90(less than 622) crores, according to yesterday's Deshabhimanj (Feb.6th 2018) report.

Modi’s plus points are his constant eloquent speeches in vernacular, his ‘Man ki bath’ connecting him to general public unlike any former PMs, his team’s ability to come up with unforgettable, power-packed catchy slogans like: ‘Sab ka sath, sab ka vikas’, ‘Make in India’ etc., his capacity to be a ‘workaholic’ from dawn to dusk and his constant foreign tours to befriend world leaders through ‘Hug-diplomacy’ – all to put India in the lime light before the comity of nations and promptlng the general public to overlook his failures at home.

A healthy democracy can function only in a country where the voting public is educated enough to make a balanced judgment of the merits of candidates they are called to vote in. About such a democracy alone it is said: “You get the government you deserve!” How many countries of the world deserve this credit, not even America which claims to be the oldest and most democratic and least of all India called the biggest  democracy, where visual and print media are forced to play the role of a ‘caged parrot’, or ‘His master’s voice’.

Freedom of the press, called the fourth estate will become a reality only where Voltaire’s definition is allowed to reign supeme which in brief says: ‘I will go to death to defend your right to think, speak or write what you are convinced of, even when  I may not agree one bit with what you say.” How many countries are prepared to allow this freedom to their subjects; nay how many of us prepared to listen patiently to critics of our  beliefs and convictions, to our opponents and dissenters? Yet that is the kind of tolerance we all should cultivate in ourselves because it is our critics that render us the biggest service by pointing out the weak points in our argument, reminding us the adage: “you have to learn even from a grave digger!”

Even at the cost of becoming our own grave diggers, how many of us are prepared to listen with docility to a bitter critique of our views without reacting violently? Freedom of expression permits even the possibility of hurting, not hurting intentionally,  as it often happens in friendly foot-ball matches.  Shouldn’t we all at least try to rise to this height of perfection, recalling another instructive adage: “Triffles make perfection but perfection is no triffle”(Michael Angelow).”