Retired Pope Benedict:  it was His ‘duty’ to resign from papacy 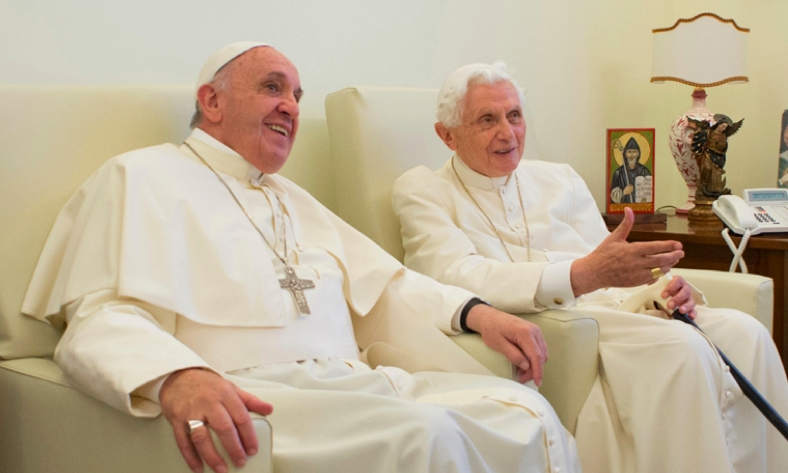 Pope Francis chats with retired Pope Benedict XVI at the retired pope's home at the Mater Ecclesiae monastery at the Vatican June 30.

(Note:  John the Baptist came to prepare the way of the Lord, to make it straight and not crooked and so he said of himself: “ I must decrease, and He must increase!” That must be the mission of everyone who comes to announce His good news. Retired Pope Benedict announced that message in word and deed and throws at all of us: “How many of you can diminish and disappear to Jesus alone appear?” This is a question that every one in positions of authority, not only in the Church, but in civil society and in every family, nuclear or joint, must ask oneself. In the Church, it ought to apply first to every Pope, starting with the reigning Francis, to every cardinal and bishops in various dioceses the world over,  to Parish priests, religious superiors and heads of joint families. In the case of Bishops, what we see in India or elsewhere is, many of them refuse to retire at 75 the rule set for them or even refuse to get transferred to another diocese. As for bishops all over the world or in India, can anyone think of another bishop who has followed the example of Benedict? Even bishops against whom there are a lot of complaints from the faithful often refuse to budge from their throne of authority. When Benedict retired, this scribe wrote: “He stole heaven like the good thief!” Now it is heartening to hear from his mouth, that he did it as he felt it was his duty. Definitely there are ever so many bishops, who are a thorn in the flesh of their flock, or a blessing. It is for them to meditate prayerfully and make way for a more worthy successor, as Benedict did for Francis. Haven’t things turned far better for the two Popes, for the Catholic church and the entire world, since

Benedict XVI has retired? When will things turn better for the Church in India? Who is that bishop who needs must retire first? CCV readers can answser this question, since none of the bishops will respond to this question. james kottoor, editor)

VATICAN CITY; Retired Pope Benedict XVI said in an interview that he felt a "duty" to resign from the papacy because of his declining health and the rigorous demands of papal travel.

While his heart was set on completing the Year of Faith, the retired pope told Italian journalist Elio Guerriero that after his visit to Mexico and Cuba in March 2012, he felt he was "incapable of fulfilling" the demands of another international trip, especially with World Youth Day 2013 scheduled for Brazil.

"With the program set out by John Paul II for these (World Youth) days, the physical presence of the pope was indispensable," he told Guerriero in an interview, which is included in the journalist's upcoming biography of Pope Benedict. "This, too, was a circumstance which made my resignation a duty," the pope said.

An excerpt of Guerriero's book, Servant of God and Humanity: The Biography of Benedict XVI, was published Aug. 24 in the Italian newspaper, La Repubblica.

Benedict said that although he was moved by the "profound faith" of the people of Mexico and Cuba, it was during his visit to the two countries in 2012 that he "experienced very strongly the limits of my physical endurance."

Among the problems with committing to the grueling schedule of an international trip was the change in time zones. Upon consulting with his doctor, he said, it became clear "that I would never be able to take part in the World Youth Day in Rio de Janeiro."

"From that day, I had to decide in a relatively short time the date of my retirement," he said.

Guerriero noted that while many believed the pope's retirement was a defeat for the church, Benedict continues to seem "calm and confident." The retired pope said he "completely agreed" with the journalist's observation.

"I would have been truly worried if I was not convinced — as I had said in the beginning of my pontificate — of being a simple and humble worker in the Lord's vineyard," he said.

The retired pope added that while he was aware of his limitations, he accepted his election in 2005 "in a spirit of obedience" and that despite the difficult moments, there were also "many graces."

"I realized that everything I had to do I could not do on my own and so I was almost obliged to put myself in God's hands, to trust in Jesus who — while I wrote my book on him — I felt bound to by an old and more profound friendship," he said.

The retired pontiff spends his days in prayer and contemplation while residing at the Mater Ecclesiae monastery in Vatican City. For 19 years, different contemplative orders took turns living in the monastery with a mission focused on praying for the pope and the church.

Benedict said that upon learning that the Visitandine nuns would be leaving the residence, he realized "almost naturally that this would be the place where I could retire in order to continue in my own way the service of prayer of which John Paul II had intended for this house."

Among the visitors Benedict receives is Pope Francis, who "never fails to visit me before embarking on a long trip," he said.

Asked about his personal relationship with his successor, Benedict said they shared a "wonderfully paternal-fraternal relationship" and he has been profoundly touched by his "extraordinarily human availability."

"I often receive small gifts, personally written letters" from Pope Francis, he said. "The human kindness with which he treats me is a particular grace of this last phase of my life for which I can only be grateful. What he says about being open toward other men and women is not just words. He puts it into practice with me."

Francis, who wrote the book's preface, expressed his admiration for the retired pope and said his spiritual bond with his predecessor "remains particularly profound."

"In all my meetings with him, I have been able to experience not only reverence and obedience, but also friendly spiritual closeness, the joy of praying together, sincere brotherhood, understanding and friendship, and also his availability for advice," Francis wrote.

The church's mission of proclaiming the merciful love of God for the world, he added, has and continues to be exemplified in the life of Pope Benedict.

"The whole life of thought and the works of Joseph Ratzinger have focused on this purpose and — in the same direction, with the help of God – I strive to continue," Francis wrote.