The Reluctant Actor and Politician 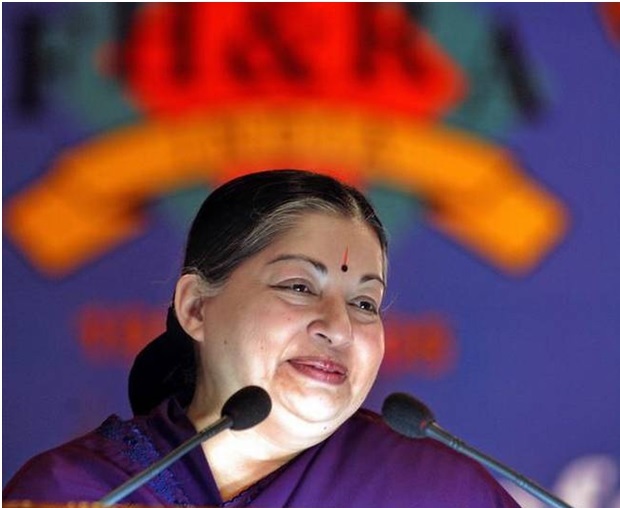 (Note: Jaya must have been a reluctant actor, initially, both in film and politics. But  people’s response to her performance in both the fields came as a natural  mass outburst, especially from the hoi polloi, the general public. There was no trace of ‘reluctance’ on the part of people’s response. Here lies the mystery of destiny and accepting its dictates wholeheartedly. What was unavoidable and forced upon, she turned into her choice fields to excel as a heaven-sent duty. That honesty and dedication to the work destiny forced upon her, made her excel and shine beyond everybody’s expectations.

The mass of humanity that thronged, nay flowed in like a flood drowning everything, for her funeral yesterday, unparalleled anywhere in the world, should have been an unforgettable  lesson for anyone who wants to be a people’s leader whether in politics or religion. The word “Amma”(mother) nutshells that indomitable force “Love unalloyed” that rules the world.

She turned herself into that irresistible force  for her children starting with those most in need – providing free meals for Rs.3/- for the starving, to mention just one among many. If political leaders can imitate her in doing this, India would soon become a paradise on earth and its rulers worthy of  people’s admiration, adulation and adoration Jaya received at her funeral. james kottoor, editor).

She was forced into the film industry by her family and into politics by MGR but once there, she excelled in both.

Mr. Ram recounted how, when he asked her if she was feeling lonesome, Ms. Jayalalithaa, pointing to her confidante Sasikala, responded, “I have a sister who is taking care of me. If my mother was alive, she would have cared for me. I have my party cadres who care for me.”
A thinking actor and an extremely popular and powerful politician, who controlled the party she inherited with an iron grip,  Jayalalithaa proved she was a natural leader and true heir to M.G. Ramachandran  when she won from the Bodinayakanur Assembly constituency in 1989, heading an AIADMK faction. Janaki Ramachandran, who led another faction, lost from Andipatti, which her husband won from a hospital bed in the U.S. in 1984.

The convent-educated  Jayalalithaa — she studied first at Bishop Cotton in Bengaluru and later at Church Park in Chennai — was articulate and comfortable in multiple languages, and the skills came handy in politics. She was an outstanding student; in interviews, she revealed her ambition was to become a lawyer like Ram Jethmalani or Fali S. Nariman.

But family circumstances forced her into a career in films; her first lead role in a Tamil film was in 'Vennira Aadai', directed by C.V. Sridhar. “I created a storm at home. I fought, I wept but it had to be films,” she told an interviewer, recalling her protest against entering the industry though she had acted in Kannada movies as a child artiste.

Though her family hailed from Srirangam, her grandfather Rangaswamy Iyengar settled in Bengaluru, where he worked at Hindustan Aeronautics. Her father Jayaram, a lawyer by training, died when she was only two and her mother Vedavalli, better known with her screen name Sandhya (after whom  her Poes Garden residence is named) worked in the Income-Tax department before taking the plunge into films. Vaasanthi, the author of Amma: Jayalalithaa’s Journey from Movie Star to Political Queen, her unauthorised biography, says, “While she was acting in Vennira Aadai, she was booked by director B.R. Panthulu for Aaayirathil Oruvan, in which she was cast opposite the matinee idol MGR, who was more than 35 years her senior.”

Despite her reservations, she took to acting like a fish to water. Cho Ramaswamy, in his memoir, recalled how she would effortlessly respond to his impromptu dialogues on the stage.

Both  Jayalalithaa and her mother worked for Y.G. Parthasarathy’s drama troupe, the United Amateur Artistes. Her stint in theatre and grounding in Bharatanatyam — K.J. Sarasa was her teacher and her arangetram was presided over by Sivaji Ganesan — gave her an edge over MGR’s other heroines.

She continued to act opposite MGR and did 28 films with him, the maximum for any heroine. But she fell out with him in 1973 and revived the relationship only on June 4, 1982, when she became a member of the AIADMK and addressed the party’s conference in Cuddalore.
She was nominated to the Rajya Sabha on March 24, 1984, and her seat number in the House was 185, once occupied by DMK founder C.N. Annadurai.

She had a knack of reading the political situation and foresaw a revival of her fortunes in the 1998 Lok Sabha polls, necessitated by the fall of the United Front government. She put together an alliance, comprising the MDMK led by Vaiko and the PMK led by S. Ramadoss. She brought on board Vazhapadi K. Ramamurthi and they joined hands with the BJP, then seen as a political untouchable in the State. The serial bomb blasts in Coimbatore in 1998 boosted the prospects of the alliance.

But her decision to withdraw support to the BJP government led by A.B. Vajpayee paved the way for another election in 1999.It closed the AIADMK’s participation in the government at the Centre. The DMK filled the gap and enjoyed power till 2013.