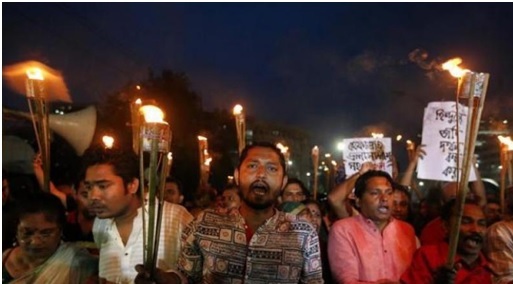 A Facebook post shared by a youth denigrating a holy site for Muslims may have triggered the latest incidents in Brahmanbairs district last week.

(Note:  Sickening indeed is the tit for tat mob mentality of both Hindus and Muslims in Bangladesh, our neighbour. Not that these things don’t ha

ppen in India. May  be, they are learning and imitating us. In India some radical sections of Hindus are vandalisisng Christian churches as well. We don’t hear of such animosities in Bangladesh.

Whether in India or Bangladesh, what it highlights is the very poor quality of educational standards of both, in two communities. The educated and enlightened know, without anyone telling them, that the essence of religion is harmony, not division, hatred and worse resorting to violence to settle differences. The only thing peace-loving people can do is to pray and do everything possible to spread ideas of peace and harmony between communities and religions. james kottoor, editor).

The Bangladeshi authorities may have acted swiftly and arrested scores after the latest attacks on Hindus, but such violence is part of an established pattern running back several years. An inter-faith unity council estimate said that over 100 Hindu homes and 17 temples were vandalised/looted since October 30.

A Facebook post shared by a youth denigrating a holy site for Muslims may have triggered the latest incidents in Brahmanbairs district last week. External affairs minister Sushma Swaraj, on her part, had directed India’s high commissioner in Dhaka to take up the matter with Bangladesh PM Sheikh Hasina. But how much more is Bangladesh willing to do to reassure its minority Hindu population, the country’s second largest religious group, and third largest Hindu population in the world after India and Nepal, of their security.

Diplomatic relations between India and Bangladesh are at their best now, presenting an ideal opportunity for India to drive home the point that the essentially secular character of Bangladesh should be reflected in inter-faith harmony on the ground too. It should be possible for India to seek more guarantees for the millions who live there, even if the Hindu population has been steadily shrinking from an earlier 13.5 per cent in the 1970s to an estimated 8.5 per cent of the population now, amounting to about 12 million people.

Under pressure on various fronts, Bangladesh’s Hindus are also seen to be targeted for their landholdings, which too has been shrinking over the years with criminal factors like land mafia operations hastening the process.