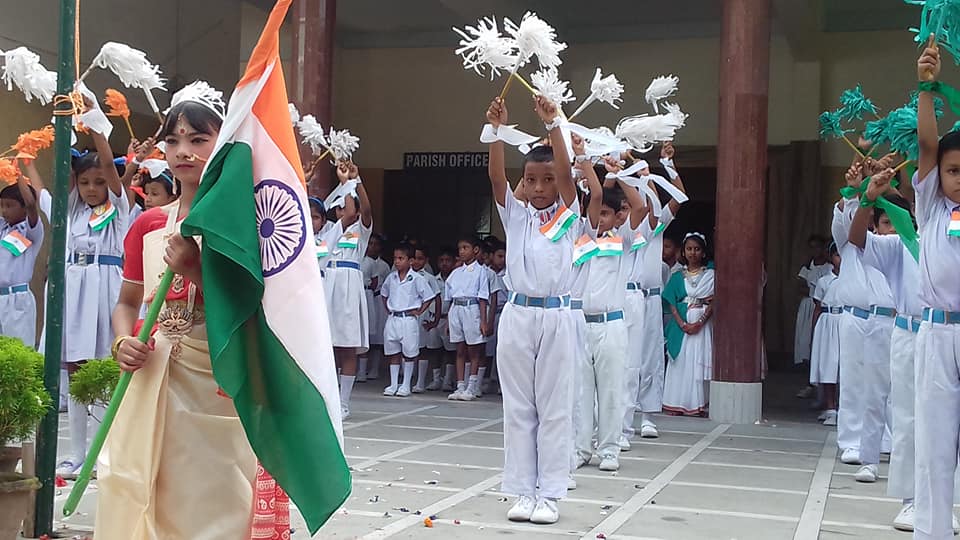 Social media was clogged with messages, images and videos on 15 August, the day on which India celebrated the 72nd anniversary of her independence. Many of course were greetings. However, one image, which will remain forever, etched in one’s memory: that of a little street girl fast asleep on a pavement clutching some unsold plastic tricolours in her hand. There was also a video doing the rounds; of a little boy whom was pillion riding on a scooter with his mum, begging of her to buy one of those plastic tricolours from a street child. The mother agrees and buys not one but two of them because of the lack of change. Her son very kindly offers the extra flag to another little girl who is seated behind her mother on another scooter. The girl takes it but her mother chides her saying that it is wrong to have such a flag. A police officer joins in and sermonizes about the ‘flag code’.

There is certainly a case, which can be made with regard to the ‘flag code’ and for that matter the use of plastics. No one is denying this. However, on Independence Day (and on all other days) the focus needs to be on the plight of the millions of children who are deprived of their childhood through no fault of theirs. Several more million Indians continue to live lives of impoverishment, victims of an unjust and of a callous political and social order.

It is fitting therefore that every year on the Sunday, near the country’s Independence Day, the Catholic Church observes ‘Justice Sunday’; this year, Justice Sunday is on 19 August. There is no dearth of ‘justice issues’ matters that need to be reflected upon prayed for and acted upon. At the outset, the Church needs to do some serious soul-searching and substantial visible action to address internal injustices (be they allegations or real) that plague the Church in India today. Several of them have hogged media attention of late: these include sexual misconduct by priests and even some hierarchy; land scams; financial unaccountability; unjust wages to employees. All these merit an immediate response for as the axiom goes, ‘justice delayed, is justice denied.’ Setting the right transparent tone, ensuring suitable punishment to those who are found guilty (however powerful they are) will go a long way in bringing about the much-needed reconciliation and healing and could restore the broken credibility of the church. (Please click on the photo to get full-sized view).

On ‘Justice Sunday’, the Church in India must reiterate her unflinching commitment, visibly, vocally and through meaningful action,to stand with the victims of injustice all over the country. Where ‘injustice’ is concerned, one cannot be selective; or take a stand ‘only’ when one feels confident that one’s material interests/privileges are not hurt. To realise one’s prophetic role is to be unconditional and unequivocal, whatever the consequences. India today reeks with injustices particularly those heaped upon the poor, the vulnerable and the excluded; high on the list of the victims are the dalits and adivasis; those with a different sexual orientation and others who are forcibly displaced; the small farmer and the casual labourer; women and children.

On 15 August, we observed our 72nd Independence Day. True, in the past seventy one years India has made rapid strides on every front. There is much to be lauded and much more to be applauded. One needs to do an objective analysis to realise how over the years so much good has been achieved and the tremendous progress that has been made in perhaps all sectors. However, despite all this, there are huge areas, which are still unaddressed, and some of our major problems continue to plague the country in no uncertain ways. The last four years have been particularly bad for the country. Narendra Modi, the BJP and their ilk have put our democratic traditions, the freedom of the ordinary citizen in peril. On every parameter, India has today reached abysmal depths.

The Indian economy is today in a shambles. Millions of Indians today try just-to-survive without access to the basic amenities of life. A sizeable section is at the receiving end of a grossly unjust system. The poor become poorer every day. It is not surprising that the OXFAM Report released last January during the World Economic Forum held in Davos stated, “The richest 1% in India cornered 73% of the wealth generated in the country last year, presenting a worrying picture of rising income inequality”. One does not have to go too far to know whom the Government supports and the scandalous proportion of wealth these individuals/ corporates have amassed in just about four years.

Lynching has become the new normal in India. On 15 August, the Prime Minister referred to these lynchings in his address to the nation from the Red Fort; but no one is being fooled. The murderers, the assaulters belong to his ilk. There is apparently no political will to deal with them; quite the contrary, the Government seems to be supporting them both implicitly and explicitly: why then, would a Union Minister garland and felicitate one of these murderers?

On 17 July in a landmark judgment Supreme Court of India condemned the lynching incidents across the country. The Bench headed by Chief Justice Dipak said the horrendous acts of mobocracy could not be allowed to become a new norm in the Country.“The horrendous acts of mobocracy cannot be permitted to inundate the law of the land. Earnest action and concrete steps have to be taken to protect the citizens from the recurrent pattern of violence which cannot be allowed to become “the new normal”…The State cannot turn a deaf ear to the growing rumblings of its People, since its concern, to quote Woodrow Wilson, ‘must ring with the voices of the people.’ The exigencies of the situation require us to sound a clarion call for earnest action to strengthen our inclusive and all-embracing social order, which would, in turn, reaffirm the constitutional faith. We expect nothing more and nothing less.”

On 17 August, well–known activist and Arya Samaj leader Swami Agnivesh, whilst on his way to pay homage to the mortal remains of the former Prime Minister Vajpayee, was assaulted in broad daylight near the BJP office in Delhi. A police van, which was nearby, apparently ‘rescued’ him; but strangely, they did nothing to the assaulters. Earlier in July, Swami Agnivesh was assaulted in Jharkhand by BJP workers. The reason is clear: the strong stand he takes on behalf of human rights and justice.

Human Rights Defenders continue to be harassed by the ‘officialdom.’ Freedom of speech and expression is a major casualty with the Government totally pulverizing the media. The global watchdog ‘Reporters without Borders’ recently released its 2018 World Press Freedom Index and ranked India a measly 138 out of 180 countries. The report blamed Prime Minister Narendra Modi’s ‘troll army' for sharing and amplifying hate speeches targeting journalists on social networks. Freedom of Religion and Belief is another major concern in India today; at the receiving end are the Muslims and Christians of the country. The right-wing ‘Hindutva’ elements feel they have a right to mete out punishment: murdering ‘beef-eaters’ or indulging in ‘honour’ killing. Almost every day we hear of minorities being attacked in the country. A recent study by the ‘Pew Research Center’ placed India fourth globally, for ‘religious intolerance’. Indian women continue to be victims of a patriarchal society. On 26 June, the ‘Thomas Reuters Foundation’ released its findings on the status of women in 193 countries across the globe. The findings stated that ‘India most dangerous country for women with sexual violence rife.’

Chilean Jesuit St Alberto Hurtado is widely regarded as the Apostle of Social Justice because of the way he identified with the poor and the exploited. His Feast is celebrated on 18 August; very prophetically he says, “there are many who are disposed to enact charity, but are not resigned to accomplish justice; they are disposed to give alms, but not willing to pay a just salary. Even if it seems strange, it is much easier to be charitable (obviously only in appearance) than just. Such apparent “charity” is not authentic, because the true charity begins where justice ends. Charity without justice will not save us from social ills, but only creates a profound resentment. Injustice causes much greater evils than charity can repair.”

Former UN Secretary General, Kofi Anan, an iconic and inspirational leader of our times, who passed away on 18 August 2018, puts reality very poignantly; “The battle for freedom and justice is never hopeless, but it is never finally won. Every morning, we must wake up ready to fight it again.”

We need to redefine our freedom within the framework of justice! Hopefully, on Social Justice Sunday we will awaken to the realities around us, ensure justice for all and redefine freedom for those ordinary children, women and men of our times who suffer greatly because of injustices!