Reaction of A KNOW-NOTHING to All-Knowing Younger Brothers of mine, led by Chotebhai! 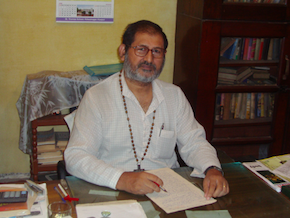 “You ask:When? When I discovered the full import of the last message of Jesus writ large on his cross of death INRI telling without saying — following the maxim: "don't say it write it indelibly!". Any more proof needed? Jesus never became a priest, not even a Christian! Jesus was born a Jew, lived as a Jew and died, a JEW!

"Yes I was a Catholic (oximoron) priest but even before that, I was a World Citizen. That is what Jesus was when he presented himself as the SON OF MAN! including all humans and excluding none. That is what I am trying to reaching up to.

"CHANGE, yes Change alone is the unchanging law of Nature(Newman) — "to be perfect is to have changed most often", not stopping with 'oximoron' Catholic, but reaching up to the REAL UNIVERSAL vision of Jesus: Sons of men with the SON OF MAN, not stopping with the Ottaviani motto: 'Church always the same' – 'Semper Idem', but going beyond all churches and organized religions to reach the Vatican IInd motto: 'Eclesia Semper reformanda' — (constantly, non-stop.)

Recall also the saying of the world-famous artist: Michael Angelo: “Trifles make perfection, but perfection is no trifle” And what about the world famous poem of the Communist Vayar Ramavarma(for me JESUS alone was the ideal Communist in world and deed.)

Vayalar alone sang the unforgettable song: “Man created Religions, and religions created Gods countless, and Gods and Religions concocted to divide this mother earth among themselves, what is worse, to divide Human Minds among themselves into fighting factions and their store houses into deadly weapons” which I taught my children in their teens, all good musicians. Also I used to quote Vayalar in my writings, which my readers would recall, also in my book: “Womb to Toomb”!

Thank you and God bless you, dear Chotte, if there is a God. I am only a Know-nothing, so you can just ignore me. james