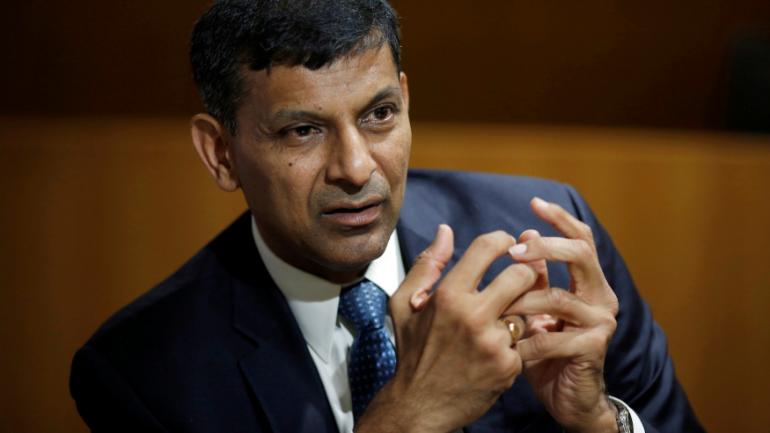 Cover Photo: Raghuram Rajan cautioned that the current fiscal space of India is not conducive for such a high-expenditure scheme. (Photo: Reuters)

Former RBI Governor Raghuram Rajan has just given a series of wide-ranging, hard-hitting interviews on a host of burning topics while launching his new book "The Third Pillar".

Read more at:
//economictimes.indiatimes.com/articleshow/68578678.cms?utm_source=facebook_wap&utm_medium=social&utm_campaign=socialsharebuttons&from=mdr&utm_source=contentofinterest&utm_medium=text&utm_campaign=cppst
Former RBI Governor Raghuram Rajan has just given a series of wide-ranging, hard-hitting interviews on a host of burning topics while launching his new book "The Third Pillar".

As reported in the Economic Times of 26 March 2019, former Reserve Bank of India Governor has just given a series of wide-ranging and hard-hitting interviews on a range of burning topics while launching his book The Third Pillar. He said India needs a strong internal economy which should be the focus for the 2019 general elections. He cited China's example to drive home his point. "China has focused on going strong economically first. Now we can see they have a pretty significant army and defence system."  In an interview with CNBC he expressed doubt whether India's GDP was really  growing at seven per cent (as claimed by the NDA Government). He said this uncertainty over GDP growth figures needed to be cleared by appointing respectable economists to oversee the exercise.  The million dollar question is whether the Government will call economists like Nobel Laureate Amartya Sen who is a critic of the current government, a strong proponent of development from the grassroots level starting with women and is famous for his quote: "While I am interested both in economics and in philosophy, the union of my interests in the two fields far exceeds their intersection." Dr Rajan also expressed his fears about JOBLESSNESS clearly the gravest of India's problems and said India's job market is heavily skewed in favour of passouts from reputable institutions like IIMs.

On the heels of his above fears and doubts, he said that the Nyuntam Aay Yojana (NYAY) – which in Hindi means Justice – scheme announced by Congress will promote growth at the grassroots level. However, he remained sceptical about whether the Indian economy can afford such a scheme given the fact that India is already burdened with heavy social expenditure. Also Rahul Gandhi, the Congress President, has not outlined how he is going to meet his proposed expenditure of Rs 3.6 Lakh Crore at Rs 72,000 per year to be given as minimum income to poor families, benefiting 5 crore families which works out to around 25 crore people.  Are we going to witness another election with tall promises without any economic sense?  Isaac Gomes, Asso. Editor, Church Citizens' Voice.

Former Reserve Bank of India governor Raghuram Rajan thinks the minimum income guarantee scheme proposed by the Congress is good in theory but needs to take into account the fiscal realities of India.

Raghuram Rajan was speaking exclusively with India Today TV on the occasion of the release of his new book 'The Third Pillar'.

On March 25, Congress chief Rahul Gandhi announced that Rs 72,000 per year will be given as minimum income to poor families, benefiting around 25 crore people, if his party is voted to power in Lok Sabha polls.

The name of the proposed scheme is 'Nyuntam Aay Yojana' or NYAY. The word 'Nyay' stands for justice in Hindi.

While Raghuram Rajan agreed that the NYAY scheme announced by Congress will promote growth at the grassroots level, he remained sceptical about whether the Indian economy can afford such a scheme.

According to Raghuram Rajan, if implemented properly the Congress's minimum income guarantee scheme can "revolutionise things". "There are ways of structuring the scheme in a way that it creates growth at the grassroots level. It will allow people to make financial decisions on their own. The question is how it will roll out. Will it add on to existing schemes or will it revolutionise things? We have a chance to target poverty alleviation effectively. If done effectively it [NYAY scheme] can change how things are run" said Raghuram Rajan.

However, he cautioned that the current fiscal space of India is not conducive for such a high-expenditure scheme. "The government that comes needs to see what the fiscal space looks like. As of now, it is very tight. You cannot add a scheme upon scheme. A view should be taken post elections within the fiscal space available," said Raghuram Rajan.

Taking into account the current fiscal deficit of India, Raghuram Rajan said the Congress's NYAY scheme may not be feasible. He said, "Given where we are, can we add another 7 lakh crore subsidy? The answer is no. Any sensible government will see post elections how do I make what I promised happen."

Announcing the scheme Rahul Gandhi had said, "The time for change has come". Five crore families and 25 crore people will directly benefit from the scheme, he claimed, terming it is a "final assault" to eradicate poverty in the country.

"The final assault on poverty has begun. We will wipe out poverty from the country," Rahul Gandhi had said.

"This is a historic scheme which has not happened anywhere in the world. It is an extremely powerful, ground-breaking and well-thought through idea. We have consulted many economists on the scheme," Rahul Gandhi had said.

Fromer RBI Governor Raghuram Rajan expressed doubts over the Indian Economy growing at seven per cent when not enough jobs were being created.  He said the current cloud over GDP numbers must be cleared by appointing an impartial body to look at the data.

Rajan who has served as  Chief Economist at the International Monetary Fund (IMF) said he had no idea what the statistics were pointing to currently and "revamp" was needed "to really figure out what India's true growth rate is."

The former RBI chief did not name the minister. He said a stronger broad-based growth was needed to create more jobs.

On doubts being expressed over economic data after the revision of growth rate, he said "I just think that we need now to essentially clean up, find out what in fact is the source of confusion with the new GDP numbers, with the revisions, etc. I would say setting up an impartial body to look at it is an important step to restoring confidence," he said.

In November 2018, the Central Statistics Office (CSO) had lowered the GDP growth for the previous Congress-led UPA Government by recalibrating national accounts.

After this the four years of the current government, showed a higher average  growth than that achieved during the UPA regime.  Questions have been asked about the NDA government not making the NSSO labour survey that reportedly put unemployment in 2017 at a 45-year high.

Earliler this month a group of 108 economists and social scientists said that lately Indian statistics and the institutions associated with it have come under a cloud for being influenced and indeed even controlled by political considerations.

"In fact any statistics that cast an iota of doubt on the achievement of the government, seem to get revised or suppressed on the basis of some questionable methodology,"  the group had said in a statement. While the public debate the merits and demerits of the scheme, Rahul Gandhi has thrown his weight behind it, saying his party consulted "big economists" including former RBI governor Raghuram Rajan before it came up with the idea.

Addressing a Congress meeting in Jaipur, Rahul Gandhi told party workers the Congress consulted "all big economists, without telling anyone, without giving any speeches". "We were engaged in this work for six months. Take the list of all big economists of the world, we consulted them…Raghuram Rajan…one by one," he said.

According to Rahul Gandhi, the minimum income guarantee scheme is a definite firecracker. He claimed the scheme will be on a "surgical strike on poverty".