On Quit India Anniversary, two visions and a cry against Hindu Pakistan 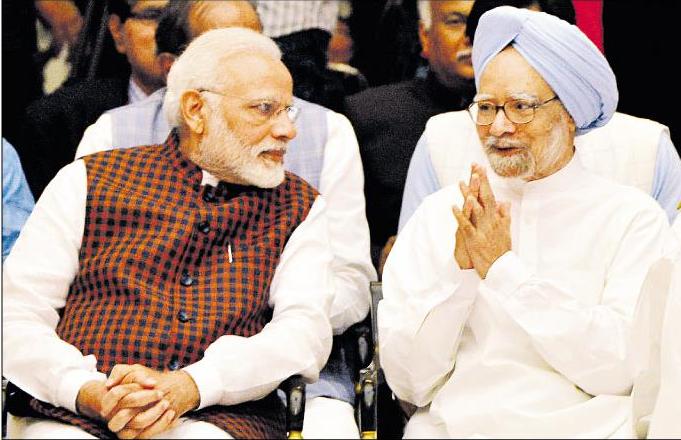 Cover Photo: A RARE BREAK FROM RANCOUR: Prime Minister Narendra Modi with his predecessor Dr Manmohan Singh during an " At Home" hosted in the honour of freedom fighters at Rashtrapati Bhavan on the occasion of August Kranti Day on Wednesday. Picture by Prem Singh

(Note: Yesterday, August 9, both the Rajya Sabha and the Lok Sabha witnessed healthy debates on the 75th Annniversary of the Quit India Movement or the India August Movement.  Mahatma Gandhi launched this movement on 8th August 1942, at the Bombay session of the All-India Congress Committee, during World War II, demanding an end to British Rule of India. After a long time, the nation witnessed space for debate, agreement and agreement to differ. The key paragraph in the resolution adopted at the Rajya Sabha, where the Opposition holds the upper hand, was in keeping with the spirit of democratic, inclusive and secular India, enshrined in our Constitution.  Sonia Gandhi spoke well, as did Kanimozhi – Rajya Sabha MP from Tamil Nadu, Professor Sugata Bose – TMC MP from West Bengal and Sitaram Yechury.  This is what our MPs are mandated to do by the electorate – debate with mutual respect and deliberate on measures for the common good of citizens, especially the marginalized.  Isaac Gomes, Associate Editor, Church Citizens' Voice).

New Delhi, Aug. 9: The 75th anniversary of the Quit India Movement  was transformed in Parliament today into an occasion that exposed deep fractures in the polity.

The two Houses could not agree on a common resolution. The separate resolutions were revealing.

A key paragraph in the resolution adopted in the Rajya Sabha, where the Opposition holds the upper hand, said: " On this day, we solemnly take a pledge to uphold and safeguard the values and ideals of the freedom movement and rededicate ourselves to build an India that is strong, self- reliant, inclusive, secular and democratic."

The resolution in the Lok Sabha, where the BJP is the dominant force, laid emphasis on a strong, prosperous, clean and corruption- free India. It spoke of science and technology, patriotism and democratic values.  One word — sadbhav (harmony) — stood in for more political words like " secular" and " inclusive".

The following excerpts (from some of the speeches) stood out:

Elephant in the room

The role the RSS did not play or did play in the freedom movement hung heavy.

Narendra Modi: Every individual in the country had become part of the Quit India Movement. Inspired by Gandhiji's words, the whole country was moving forward….

Sonia Gandhi: When we remember freedom fighters, we should not forget there were outfits and people in that period who opposed the Quit India Movement. These elements had no role in the freedom struggle.

(Murmurs of disapproval swept through the treasury benches in the Lok Sabha, and BJP member Kirron Kher was heard saying: " Sad, sad…. This is the tragedy of Parliament.")

Modi: In 1942, the clarion call was " karenge ya marenge ( do or die)". Today, it is " karenge aur kar ke rahenge ( we will do and surely do)". The country needs the spirit of the Quit India Movement to develop into an India of the dreams of the freedom fighters in 2022.

Corruption, poverty, illiteracy and malnutrition are the greatest challenges that India now needs to overcome and we should rise above political considerations and resolve to bring about a positive change.

Sonia: Fear is replacing freedom…. Isn't it true that there is an attempt to destroy the foundations of our democracy which rests on freedom of thought and faith, equality and social justice? We can't let the idea of India be a prisoner of a narrow, divisive and communal ideology…. It appears our secular, democratic and liberal values are in peril. Space for debate, disagreement and dissent is shrinking. Kanimozhi: The only real freedom ( to expect) is freedom from fear…. If our women, if our people, if our Dalits, if the underprivileged, the backward communities and the minorities are not free from fear of the future, then there is nothing to feel proud of.

(Kanimozhi, a Rajya Sabha MP from Tamil Nadu, recalled freedom fighters from her state who took part in the Quit India Movement without knowing Hindi. Many were non- Hindus who ate what they wanted.) Are they in any way less of Indians? Are they less than anybody else? But today, if I don't speak Hindi, people think I am less of an Indian. If I don't eat what some people think is right, or if I am an atheist, I am not an Indian. Why have we become this?

Sugata Bose: Modiji says that the next five years will be transformative. We sometimes wonder is it transformative because the three top constitutional posts are held by people belonging to the same ideology? We cannot but express some concern. If he truly wants all evils to quit India by 2022, including communalism, in the pejorative sense of that word, we hope that he will take stronger action against those who are spreading the poison of hatred and killing human beings in the name of religion.

(Amid thumping of desks by Opposition members) I appeal to the Prime Minister to stop the engines of coercion in their tracks. Faith in India's destiny rescues us from debilitating pessimism in the face of ferocious assaults on the expression of rational difference. 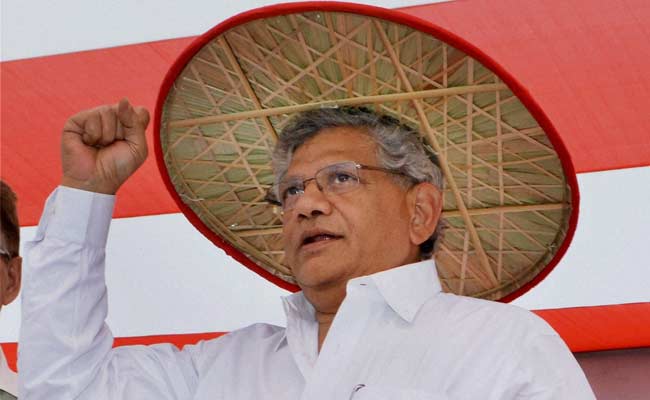 Sitaram Yechury: From 1942 to 1947, the country witnessed Partition and communal polarisation. If you ( Modi) are alluding to those five years, there is an ominous sign. It is a very dark cloud.

(Law minister Ravi Shankar Prasad objected: This is not fair. Modi said unemployment, education. Today is a pious day. He should not talk against the Prime Minister).

Sitaram Yechury: The movement forward should be for strengthening the secular democratic republic of India and not for creating a Hindu Pakistan in India….
(The CPM leader quoted Edward Lowd, who had chronicled the events in the India of 1857) He wrote in the chronicle: " If the infanticide Rajput" — this is according to the British; these are not my words — " the bigotal Brahmin, the pig- eater and the pig- hater, the cow- eater and the cow- worshipper, all of them come together, there is no future for the British in India".