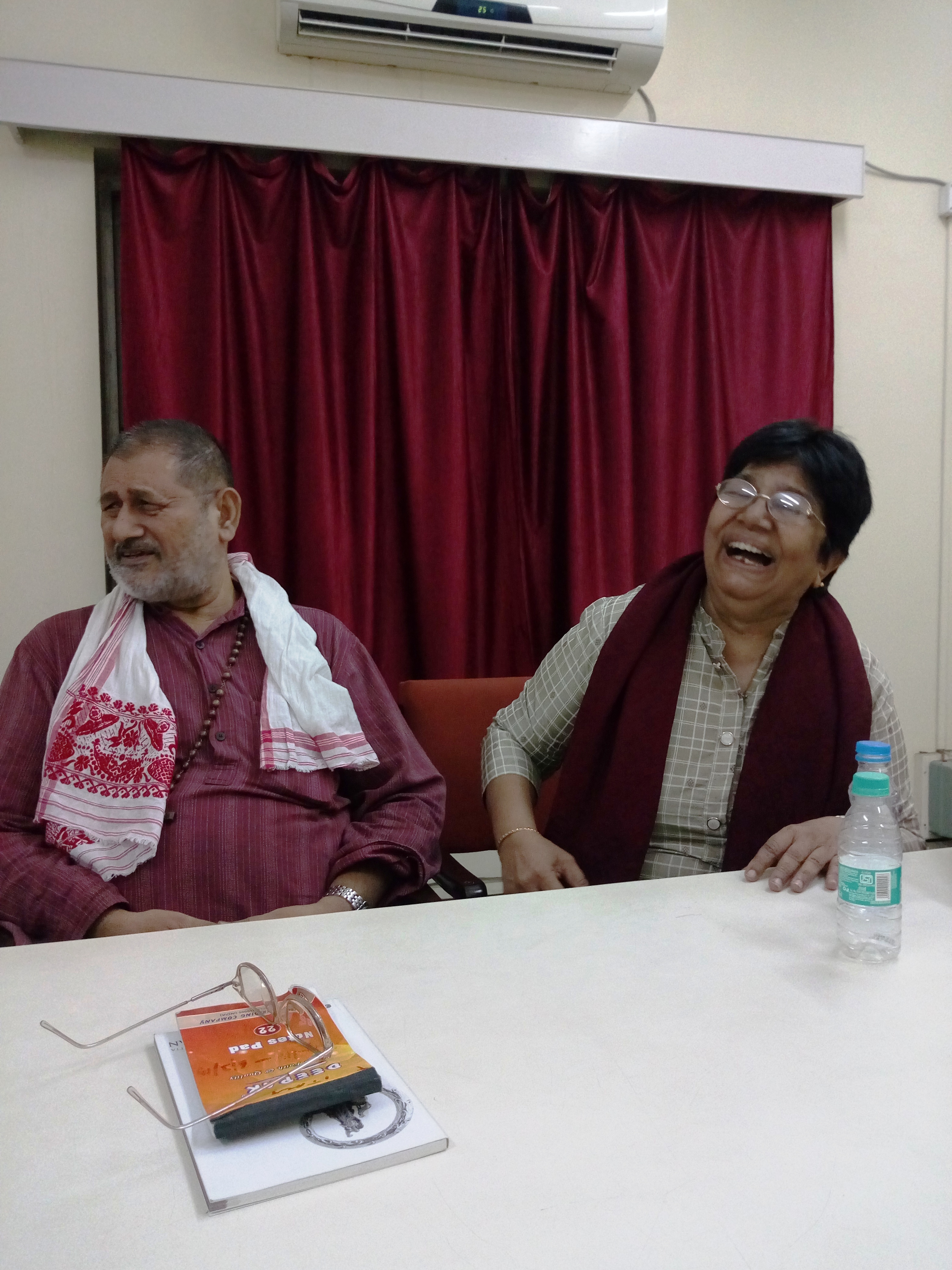 Cover image:  Chhotabhai and Boudi (his wife) all smiles during interaction with ASCC members in Kolkata on 2nd July

July 2, 2018 – Prophetic communicator and a great social thinker Chhotebhai paid a short yet very impressive visit to Kolkata, when he stopped by Kolkata Airport after a tour to Arunachal Pradesh and other north eastern states. Chhotebhai wrote to me ten days ago that he would be touching Kolkata briefly. So I arranged a meeting with members of our Archdiocesan Social Communications Commission (ASCC) at 5.30 pm by which time Chhotebhai along with Boudi (Bhabi) comfortably reached Archbishop’s  House from Kolkata Airport.

As the knowledgeable readers must be aware, Social Communications is Chhotebhai’s forte.  They must have come across his copious, crisp and thought-provoking articles in various journals, especially in Indian Currents, Church Citizens Voice and mattersindia.com.  He is also a past President of All India Catholic Union (1990-1994).

In his mind-boggling two-hour interaction with ASCC members which included Fr Dominic Gomes-Vicar General of the Archdiocese of Calcutta, Chhotebhai shared the richness of his vast repertoire of knowledge.  He said in the Old Testament Priests made all the rules, the Kings followed these rules, and the Prophets interpreted these rules and spoke their minds in case of gross violation by the King.  In today's context, the same pattern is replicated in the four pillars democracy.  The Legislature (priests) frames laws, the Executive (King) implements these and the Judiciary (Prophet) interprets the laws. Media, the fourth pillar, too, acts as a Prophet inasmuch as it  ensures transparency in the working of the above three systems.  Like prophets, it holds up a mirror to society and the governments alike, to pinpoint socio-political evils and injustice, to empower people and to facilitate development. In the light of this scenario, Chhotebhai reminded ASCC members that Catholic media persons and members of the Social Communications Commission have an onerous role to play.  They have a responsibility to unearth and report the Truth.  He also cautioned, an upright media person stands alone like the prophet of the old – without any support or friends; his/her only support is the Word of God.

Chhotabhai said there is a fifth aspect/angle, besides the above four pillars. It is called Fifth Columnist.  It is a sinister alternative (e.g. Maoists, PLA Manipur, ULFA, IM, etc) which emerges when the four pillars fail and it aims to bring about radical social/political change often through armed revolution.

Chhotebhai said we Catholics are allergic to rise against injustices in the system.  In our Churches all the rules, regulations and decisions are mainly made by the clergy.  In most cases, the laity is hardly involved in church finance, administration and decision-making. So, disgruntled members just leave the church.  Because of this lack of transparency and accountability, there is mass exodus and empty churches in Europe. In the USA, the churches are mainly frequented by the blacks and Hispanics, while the original Catholics from Italy, Ireland, etc. have thinned.

Earlier the Laity was financially dependent on the Clergy.  Now they depend on priests only for admission of their wards in missionary schools.  Chhotebhai said the first two years after school-leaving is very crucial for a Catholic student.  For without the spiritual protection of missionary schools, she/he becomes a lost sheep in Urban Anonymity – no one knows what she/he is doing in a city, unlike a village community.  As a corollary, today we are faced with Empty Nest Syndrome – children stay separated from their parents who live in loneliness.

According to Chhotebhai the Church still functions in a charity style called Missionaries-of-Charity Mode. He said Laity must stand up economically through concerted skill development (teaching/learning the art of fishing) rather than seeking doles from the Church. He also expressed his sadness that today Youth Ministry is virtually non-existent in most parishes. Youth are not involved in decision-making process in parishes. No wonder they get disillusioned early and look for outlets elsewhere.  Chhotebhai also lamented the very low percentage of Christian students and alarming drop-out in our missionary institutes which as per Supreme Court judgement can admit up to fifty percent students from Christian Community. No wonder most of the political leaders and captains of Industry are coming out from other communities who reap the benefits of being educated in Christian Institutions.

Speaking of his experience on Christian politicians he said most of them are highly corrupt, especially in Goa and North-east.  He said we, including priests, are terribly lacking in our knowledge of the Scriptures, the Vatican II documents and Canon Law. He cited instances of priests who lack knowledge in the above core areas. Instead they peddle superstition which insults most churchgoers’ intelligence. He illustrated the homily of a priest who said when St Paul was beheaded in Rome, his head bounced on three places and in each place, a fountain came up! He also said in the North-east there were churches every fifty yards. But each church was founded on tribal lines and competed with each other on how high and gorgeous it can be.

On being questioned how he took the name Chhotebhai, he explained when St Francis of Assisi started his order, his followers were called Friars Minor – Friar meaning brother and Minor meaning small.  Hence the name Hindi version Chhotebhai.

Together with his wife, Chhotebhai also paid a courtesy call on Archbishop Thomas D’Souza and had an audience with him.

The ASCC was fortunate to meet him, but a wider audience will surely bring great insight and strength to the Catholic laity in our archdiocese.  On 8th July 2018, the Laity Commission of the Archdiocese is organising a Laity Seminar at Christ the King Church.  Sadly the keynote speakers are two priests and not Chhotebhai, a lay leader par excellence. The Laity of the Archdiocese of Calcutta is still in blissful slumber!