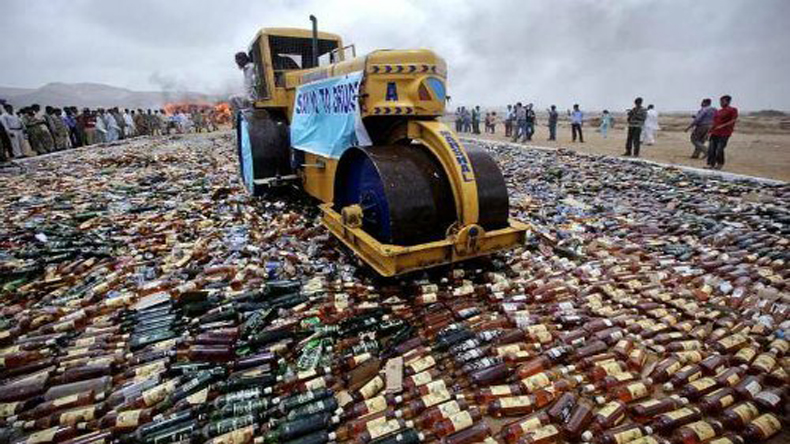 (Note: The forbidden fruit has always been the most sought after tasty fruit from the time of God’s creation and the tragic story of Paradise lost. Still how is it that humans, called rational, have not learned any lessons? Or have they (humans) decided to act with a vengeance  against a God who resorted to this stupid example to teach Him a lesson using a tit for that: “If a God can do it why can’t I?”

Our first parents in Paradise would never have thought of the tasty fruit, had not God told them about it. Similarly no one would be going for cheap, spurious liquor had not governments in

various states imposed the draconian law of prohibition in their states.  God has given various tastes to humans for food and drink and it is  for them to choose what they like and consume with moderation. Amithamayal  amruthum visham. (Even the best  godly food becomes poison when consumed beyond measure and restraint, says a   Malayalam proverb. james kottoor, editor)

Bihar: If prohibition were merely a matter of decree, India would have been free of liquor by now. But strict enforcement is almost impossible, and as a result prohibition has been counterproductive in States that have adopted the policy for any length of time. Instead of bettering living standards and improving public health, liquor bans have only led to a spurt in the consumption of illicit brews. After 15 persons died this week following consumption of illicit alcohol in Bihar’s Gopalganj district, the Nitish Kumar government is forced to confront the question whether prohibition as a cure is worse than the malady. Incidence of hooch tragedies tends to be higher when prohibition is in force as the trade is driven underground: the black market grows and production becomes unregulated.

The debilitating effect of indiscriminate consumption of liquor is definitely a challenge before state policy, but decreeing lifestyle choices is always tricky. Even solutions that are good in principle may not work in practice if implemented without sufficient care or administrative back-up. Of late, political parties have resorted to the prohibition card, sensing the growing support for such a move among large sections of women, especially in the lower income groups, who have had to deal with financial neglect and physical abuse by drunken family members. However, the States starved of revenue from the liquor business have been hesitant to invest adequately in prohibition enforcement. The end result is that bootleggers and illicit brewers just replace liquor shops.

The State government seems acutely conscious that the deaths speak to the total failure of the prohibition policy. Families of the dead have been asked to testify that the deaths had nothing to do with consumption of illicit liquor. In any case, Bihar seems to have gone too far with its prohibition legislation, even providing for capital punishment for those trading in illicit liquor. Provisions for punishing family members above the age of 18 in case of consumption of alcohol at home, and the top management of companies in case of consumption within their company premises, are draconian to the point of being absurd. Also, district magistrates can impose fines on whole villages or communities in case of repeated violations of the prohibition regime. But other than changes to the law, the government seems to have done nothing to facilitate enforcement on the ground. The liquor trade appears to have gone underground, thus increasing the risks for the most vulnerable sections of the population. Chief Minister Nitish Kumar will have to necessarily rethink the prohibition policy, choosing pragmatism over starry-eyed idealism, and matching good intentions with hard work on the ground.

(For a commentary on this  article read the separate Editorial piece: “Use and abuse of Liquor.”)