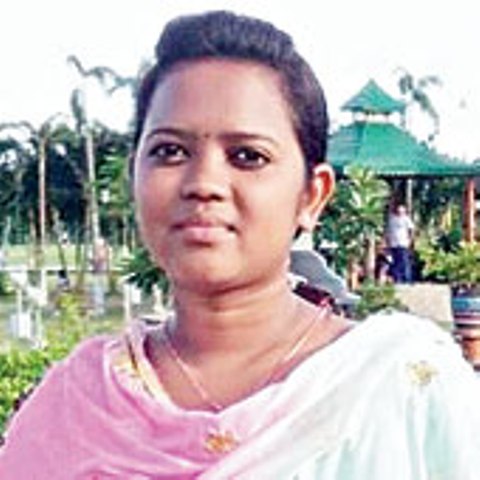 (The untimely and most unfortunate death of Uma Xess, a 26-year-old nurse from Odisha, at AMRI Salt Lake, where she was on night duty, has brought out once again the shoddy management in the private hospital sector. Uma's colleagues alleged that she died without receiving the necessary treatment hours after complaining of severe headache around 2 am on Thursday. Mamata Sarkar, her roommate at a paying guest facility, alleged that Uma had applied for sick leave but was denied leave. Uma's nursing superintendent asked her to visit an ESI hospital later in the day for the CT scan, saying that was where she was entitled to be treated under the AMRI hospital's employee health scheme. AMRI Salt Lake has an agreement with the ESI to treat patients under its scheme. Sources in the hospital management today said the nursing superintendent had not directed Uma to another hospital: she had only said the CT scan must wait till Uma had brought her ESI scheme documents from home and deposited them with the AMRI hospital's ESI desk.

But a circular issued by ESI on September 13, 2010, says: "In case of emergency, the employee/ dependent may be directly taken to any of the nearby hospital(s) available under the ESIC networkie-up hospital so as to avail cashless, hassle-free health services from the hospital."

It adds: "In case no such hospital is available, the employee/dependant may take treatment from any of the government/private hospital(s) nearby and the bill paid by him/her may be reimbursed." ESI's rules say that treatment in an emergency case must start immediately whether or not the patient is able to furnish her documents straightaway.

It's a great pity that the nurse who had dedicated herself to save others' lives, did not get timely treatment in the very hospital she was working, due to red tapism and sheer callousness of the Nurse-in-charge and  the doctors on duty.  Uma's colleagues and Group D staff staged an agitation after her death and roughed up AMRI HR Manager Gaurav Nair. Many of them were in tears today as her body was wheeled out of the mortuary..No wonder Private Hospital Managements are facing repeated cases of staff flare-ups and consequent flight of nurses to government hospitals which offcer better pay, work conditions and job security. This turbulence might lead to collapse of healthcare system. The incident, though not directly connected, may be linked to the Kerala Nurses Strike in Church-run hospitals, for better pay package and work conditions.

Surprisingly, the 101 Christian intellectuals/ leaders who issued a lofty press release to Church Hierarchy, conveniently overlooked the exploitation of Kerala Nurses by the Kerala Church authorities which even roped in the Kerala Catholic Sabha to rein in the agitating nurses. Isaac Gomes, Church Citizens' Voice).

Uma’s colleagues watch her body being taken from the hospital in Salt Lake on Friday. As the hearse left, the nurses and Group D staff formed a human chain along both flanks of its path to the gate. Picture by Mayukh Sengupta, The Telegraph

Are private hospitals too rigid

in dealing with their nursing staff ? The death of a nurse who was allegedly denied leave has raised the question. And private hospitals admit that they are worried about losing nurses for thousands routinely switch to government hospitals, lured by the latter's less taxing job profile and almost double the pay .

The flight of nurses has been a perennial challenge for private hospitals in Kolkata. This has turned the private sector extremely rigid about the working conditions of nurses, according to insiders. Since they are viewed with suspicion, denial of leave is frequent, it is alleged.

Several private hospitals, including Belle Vue, AMRI and Ruby General, have planned their own nursing schools for a steady supply of attendants. “Initially , it used to be a crippling blow for we would lose more than a hundred every year. Now, we are ready to meet the eventuality and immediately start recruiting. But it's still a loss, which is why we will soon have our own nursing school for an uninterrupted supply ,“ said Pradip Tondon, CEO, Belle Vue Clinic.

He added that the crisis strikes every October when government hospitals start recruiting. For about a month and half, every private hospital is left grappling with a shortage of nurses. “It still takes us about a month to recover,“ said Tondon. Some others take even longer.

While a government hospital offers Rs 28,000 to a new recruit, a private hospital offers a package of Rs 16,000 apart from perquisites. But the gap is huge, admit private hospital authorities. “This crisis affects every hospital. Every year, we have to look for nurses in neighbouring states like Jharkhand, Bihar, Tamil Nadu, Kerala and the north-east. It is difficult to compete with government ho spitals since they offer more secure and less taxing jobs. Even with our nursing school, it has become difficult to tackle the crisis, at least for two months immediate after the flight happens,“ said Subhashish Dutta, general manager (operations), Ruby General Hospital. Every year, 45 nurses join Ruby from their school.

At Medica Superspecialty Hospital, too, flight of nurses has been an annual issue. “We have learnt to live with it. In the initial years, it would land us in soup. Now, we are ready to meet the challenge and prepare in advance. But still, recruiting a large number of nurses is not easy . We manage to make sure that we are never short of nurses, though,“ said Alok Roy , chairperson, Medica.

While the difference in salary between government and private hospitals can't be bridged, it's not as big as it seems, felt Tondon. “We offer perquisites like free accommodation and food that government hospitals don't. But the sense of security attached with a government job is probably too good to resist for many ,“ said Tondon.

Private hospitals had sought a rule barring recruitment from their facilities, but the state government rejected it. “We must think of alternatives. I think the problem will ease out in a couple of years when more private hospitals have their own nursing schools for a steady supply of nurses,“ said a hospital CEO.