Is priestly celibacy the cause of clerical sex abuse? Not likely, victim says 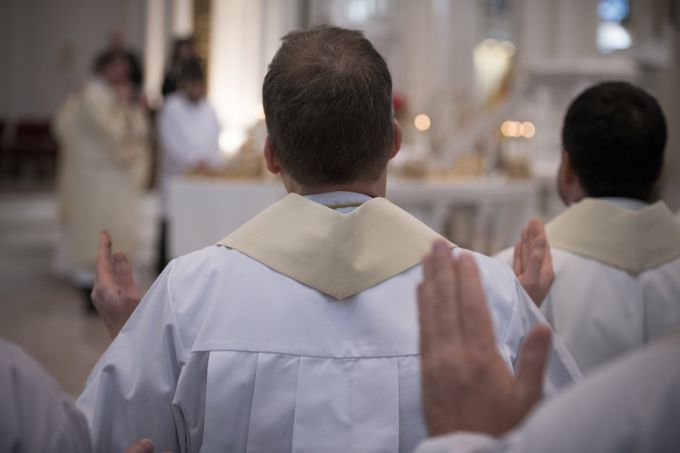 Priests celebrate Mass at the Cathedral of the Immaculate Conception in Denver, Jan. 17, 2015. Credit: Catholic Charities/Jeffrey Bruno (CC BY 2.0).

Vatican City, Feb 7, 2015 / 12:47 pm (CNA/EWTN News).- One survivor of priestly sexual abuse says that despite a common perception that clerical celibacy can lead to sex abuse of minors, most perpetrators likely had issues before entering the seminary.
“People don't enter the priesthood and become child abusers, I don't think that's the case. I think that they had serious issues before entering Holy Orders,” Peter Saunders told journalists in a Feb. 7 press briefing.

Although there are “far too many” clerics who have committed sexual abuse of minors, “the vast majority of priests and religious will never hurt a child. I think it's important to acknowledge that.”

Saunders said that the term “pedophile” is overused, and that the priests who abused him, rather than having any illness, “were very lonely.”

One of the 17 members of the Pontifical Commission for the Protection of Minors, Saunders spoke alongside the commission’s head, Cardinal Sean O’Malley of Boston, giving journalists an update on the work they're doing during their Feb. 6-8 meeting in Rome.

Abused by priests in his adolescence, Saunders went on to found the National Association for People abused in Childhood, which is dedicated to offering support for all abuse survivors and for developing greater resources in abuse prevention.

He was one of eight new members added to the Vatican commission last December.

Announced in December 2013, the commission was officially established by Pope Francis last March in order to explore various proposals and initiatives geared toward the improvement of norms and procedures for protecting children and vulnerable adults

This week’s meeting marks the first time the commission has met as a complete entity.

Cardinal O'Malley also addressed the issue of the alleged connection between priestly celibacy and sexual abuse, saying that it is a “big ticket item” for the commission, as well as the psychological screening of young men before entering seminary.

With 30 years as a bishop and a long tenure of handling cases of clerical sexual abuse in his various dioceses, the cardinal said that “I personally don't believe that celibacy is necessarily what causes abuse.”

Although more studies need to be done on the topic, most show that “75-80 percent of abuse takes place in homes.” He also noted that with the current phenomenon of “serial cohabitation,” the problem of one’s partner abusing children is an increasing concern.

The John Jay College study commissioned by the United States Conference of Catholic Bishops in 2003 shows that since a more intense process of psychological screening has begun for young men who want to enter seminary, the number of clerical abuse cases “went down considerably,” the cardinal said.

Another high priority topic on the commission’s discussion list is accountability for bishops who fail to report cases of clerical sexual abuse in their dioceses. “Bishop's accountability is most definitely something that is of concern and central to some of the work that is going to be carried out by commission,” Saunders said.

Cardinal O'Malley weighed in that the commission is “very, very concerned” about the issue of bishop’s accountability, and have already begun work on new policies that would help the Church to respond “in an expeditious way” if a bishop has not fulfilled his obligations.

The cardinal said that “there has to be consequences” for bishops who fail in their responsibilities.

He also spoke of the need to develop procedures that will allow these cases of clerical abuse “to be dealt with in an expeditious way rather than just having things open ended.”

The commission is currently in the process of forming several working groups to discuss specific areas in the protection of minors. So far a group addressing the needs and care of abuse survivors, as well as bishop’s accountability, have already met.

In partnership with the Congregation for the Doctrine of the Faith, the commission has requested that each bishop’s conference send in a set of guidelines on how to prevent the abuse of minors and how to deal with cases of abuse.

Roughly 96 percent of bishop’s conferences have responded, with the remaining 4 percent being missionary countries who have limited resources and lack a diocesan structure.

Cardinal O'Malley said that the commission will soon reach out to offer help and support to these countries, so that they will have the means of creating effective guidelines.

“If you don't have a clear path to respond in cases of sexual abuse, people tend to improvise and when they improvise they make many mistakes even though there's all kinds of good will, and in those mistakes many innocent people suffer,” he said.

Pope Francis on Thursday sent a letter to all presidents of bishop’s conferences and religious superiors, asking for their full cooperation with the Vatican commission.

Cardinal O’Malley said that he, along with the other members of the commission, are “very grateful” that the Pope sent the letter, which was a suggestion the commission had made some time ago.

“It reveals how important child protection is in his pontificate, and he wants the bishop’s conferences to cooperate. It also calls on bishops and religious superiors to realize their own responsibility for child protection and care of those who have been harmed,” the cardinal said.

In addition to the current initiatives the Vatican commission is undertaking, they are working to develop educational seminars for Church leadership in the area of child protection.

The seminars, Cardinal O’Malley noted, would be designed for the Roman Curia as well as any newly appointed bishops who come to Rome. The content would also be used in orientation programs sponsored by the Congregation for Bishops and the Congregation for the Evangelization of Peoples.

Also being prepared are materials for an official day of prayer for all those who have been harmed by sexual abuse.

Saunders said that another issue the commission is discussing is how to encourage victims to come forward and speak out about their abuse.

“The first thing these people should do, if they feel able to, is to report them to the police and civil authorities,” he said, noting that there is an “abysmal” past record of “ill-judged responses” on the part of bishops and priests throughout the world.

Having waited 40 years to speak up about his own abuse, Saunders said that “it’s very important that survivors are able to come forward and speak the truth.”

Both Saunders and Cardinal O’Malley stressed the importance of priests and bishops taking the time to sit down and talk with victims of clerical abuse as a means of forgiveness and healing.

They pointed out how Pope Francis himself met with abuse victims last summer, Saunders being one of them before his appointment to the commission, and that it had a major impact on the pontiff’s personal life.

Despite the fact that the commission still has a long road ahead of them, “they're a heck of a team and I know they're very, very determined, and that they will make a difference,” Saunders said.

“I think all of us are very comforted that Pope Francis is listening and looking forward to hearing our advice…We're not here for lip service, we're here to protect our children, and our children's children.”