Priest defrocked by Pope Ordained as Bishop! Pope’s reply to Atheist is the Answer! 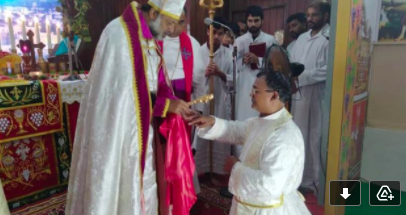 Number of bishops of the Syro-Malabar Church has risen to 61. It is growing in quantity, not in quality! That is the only conclusion a rational observer can make, it looks.

The 28-yearold Abhaya case, on the one hand, is a shining feather in the crown of Syromalabar of the principle “Let justice be done, even if the heavens were to fall” (Fiat justitia, ruat celum!” It has vindicated, justice is being vindicated, though too late! She now shines as the ONE saint who has obliterated all saints proclaimed by the “infallible church”. Who is infallible? The church or court-supported public opinion? You decide! Facts above faith, not vice versa!

Here is a report by acclaimed Italian Atheist Scalfari  in his paper La Republica. Scalari, asked Pope – the whole world knows they are thick friends – if he wouled like him to be converted, to which he gave an emphatic NO! What are the Pope’s reasons. Scalfari explains:

Pope gave “various reasons that I won’t say now, but the last of them, which it must be said is very funny, was that he told me: ‘Since I want to talk to an atheist, because he stimulates me and I stimulate him, then if you convert, I’ve got to find another like you and it would be a hell of a job, so don’t convert!". Scalfari said: “A Pope that speaks like this … then I embraced him and he embraced me.” in La Republica.

That is how a Believer par excellence live in an  unbelieving world. In spite of all these compelling evidence, the Knanaya Faction of Syromalabar is going for an appeal to vindicate the criminals in the Abhaya Case! That is the tragic comedy the Church in India is living through. They will prove the rabbit has three hones!

And remember the accused Church in India has not uttered a word against the Abhaya verditct. Why? Because it is as clear as daylight! They would rather save their FACE than their SOULS!

Have we all to live in hope and die in dipaire? I would rather stick on to “Dum spiro, spero!” I will stick on to: “I will hope, as long as I breath!  james kottoor, editor ccv.

Thiruvalla: The Apostolic Catholic Church of India on January 4 ordained as a bishop Anand Muttungal, who was recently dismissed from priesthood by Pope Francis.

Muttungal’s episcopal ordination was held at Greek Orthodox Church in Thiruvalla, Kerala, according to a press release from Bishop Babu George of the Apostolic Catholic in India. The new bishop will be in charge of the Church’s mission dioceses in India, the press release says.

Bishop Muttungal will be based at Bhopal, where he had earlier served as the spokesperson of the Catholic Church in the central Indian state of Madhya Pradesh. The ordination was presided over by Thomas Mar Osthathios, the Metropolitan of Kodungallur diocese. Others present were Bishop Sunny Abraham Panachamottil of the United Church of India and Bishop Babu George.

Bishop George welcomed the new prelate to the “Communion of Apostolic Catholic Church in India.”Metropolitan Osthathios says the episcopal ordination is a call from God “to serve God and his people in the traditions and teachings of the Apostles strongly founded in the Holy Gospel.”

The press release quoted Bishop Muttungal as saying that he has been working the unity of Christians and interreligious harmony in India. “I will continue my mission,” he added. He thanked God for his new mission that came to him “through the indirect work of Pope Francis and Archbishop Leo Cornelio of Roman Catholic Church of Bhopal.”

Muttungal had served as the Bhopal archdiocesan public relations officer for seven years first under Jesuit Archbishop Pascal Topno and then Archbishop Cornelio.The 48-year-old activist priest had also acted as the spokesperson of the Catholic Church in Madhya Pradesh.

However in 2013, Muttungal had allegedly rebelled when he was removed from the post of public relation officer. He filed a complaint that the prelate along with his vicar general Father V C Mathew and archdiocese spokesman Father P J Johny had conspired to make him mentally unstable through slow poisoning. On February 7, 2013, a magistrate ordered the registering of a case against the three accused.

Archbishop Cornelio dismissed the allegations as baseless and said he suspected behavioral problems in the priest.The prelate also said that he had consulted psychiatrists about the matter and they advised medicines. However, the plan was abandoned later as the priest began behaving normal, he added.

The prelate also alleged that Father Muttungal had tried to challenge his authority and discredit the Church with malicious intent. Muttungal on the other hand said he had gone to the court after he failed to receive response from a police complaint he had filed soon after he became aware of the alleged conspiracy against him.

Announcing Muttungal’s dismissal from priesthood, Archbishop wrote: “Now, with regret and pain I wish to formally communicate to everyone that by an official decree from our Supreme Pontiff Pope Francis, dated 22 October 2020, Anand Muttungal (Joseph M.T) of the Archdiocese of Bhopal, has been dismissed in poenam (penalty) from the clerical state and dispensed from all his clerical obligations, including that of celibacy.”

The archbishop also said he and others in the archdiocese had tried for the past ten years to bring Muttungal back and reintegrate him into “our priestly communion, which turned to be an exercise in futility.” The archbishop also explained that that the decision to dismiss Muttungal was “final “and there is no appeal against the pope’s decision.

The prelate then “earnestly” prayed that Muttungal “may gracefully accept the decision of our Supreme Pontiff and make a positive turn in order to begin a new chapter in life.” In 2020, Muttungal was released from a jail in Bhopal after 50 days. He was arrested on December 11, 2019, from his residence by the officials of Economic Offence Wing (EOW), a special branch of the state police dealing with economic offences.

He was later produced before a special court that remanded him to 15-day judicial custody. Muttungal was released from the jail after he furnished a bond of 50,000 rupees.