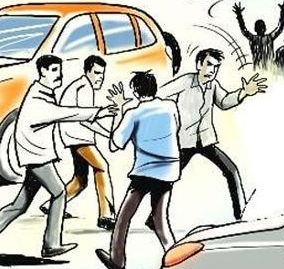 Source: Matters India. Thiruvananthapuram: A hunt is under way for six men who abused a priest and assaulted a church committee member at Thumpa, Kazhakkoottam police said on Wednesday, a day after the incident.

The priest, Fr Ashlin Jose, was verbally abused when he tried to photograph the men consuming alcohol inside a car parked near the St John the Baptist Church around 9.30pm.

Fr Jose reportedly told the police that he grew suspicious on seeing the Karnataka-registered car, and tried to photograph them using his mobile phone camera, reported timesofindia.indiatimes.com.

Enraged by the camera’s flash, the men started abusing the priest, forcing church committee member Biju, who was with Fr Jose, to intervene and pick up a fight with one of the men, identified as local resident Justin. Soon after the this incident, the youth drove away.

Later in apparent retaliation, Justin returned with more people, barged into Biju’s house and assaulted him. Biju, who suffered a broken nose in the attack, has been admitted to the Medical College Hospital.

The priest said that the incident took place just moments after the church committee had dispersed after discussing initiatives to discourage parish youths from substance abuse.

“Many youths in the area are indulging in substance abuse and I went to the car to find out if those in it were known to me,” he said, adding that barring two, others were strangers to him.

Police registered a case based on Biju’s complaint.