Pope’s envoy at IEC: ‘Church should return to youth’ 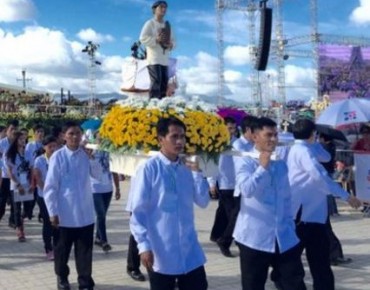 The representative of Pope Francis at the 51st International Eucharistic Congress (IEC), Cardinal Charles Maung Bo of Myanmar, posed this challenge as he closed the huge week-long Catholic congress in Cebu City.

“A Church that neglects the youth writes its own death sentence,” Bo said in his homily Sunday afternoon, January 31.

“Our youth deserve understanding, not judgment,” he added.

Bo, who comes from a poor country like the Philippines, explained that “many rich countries have money but no families.”

“The future does not belong to countries with oil or weapons. The future belongs to nations with young people,” the cardinal told thousands of IEC delegates gathered at South Road Properties in Cebu City.

Bo also warned about the “death of the family” as many countries pass laws that “attempt to redefine” families as well as parenthood, Rappler reported.

He then urged Catholics not to follow the lead of countries “with more dogs and cats than children.”

When he opened the IEC a week ago, Bo already condemned abortion and death penalty as part of the “culture of death.”

Speakers also tackled issues such as the Mass being “boring” for many Catholics.

The next IEC is set to be held in Budapest, Hungary, in 2020