Pope to visit Bangladesh and Myanmar later this year 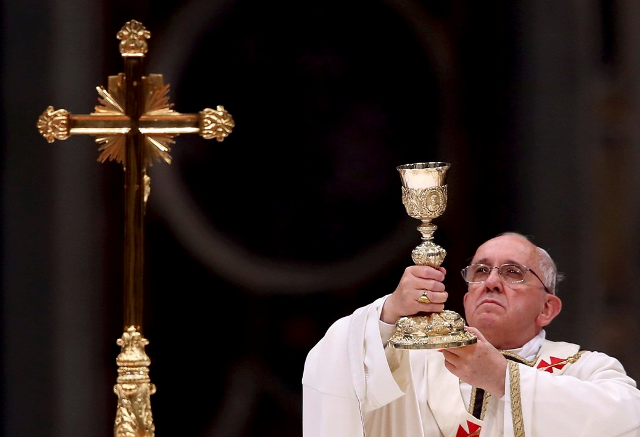 The other day the Vatican announced that Pope Francis is scheduled to visit Myanmar and Bangladesh in November this year. Though the detailed program hasn’t been made public yet, according to a Vatican statement announcing the trips, the dates will be Nov. 27-30 to Myanmar and Nov.30-Dec. 2 to Bangladesh. In Myanmar, the pope will visit the cities of Yangon and Nay Pyi Taw, while in Bangladesh only its capital, Dhaka.

The moot question is what are our mandarins at the Vatican headed by Cardinal Oswald Gracias and CBCI red robes at New Delhi doing? While Cardinal Gracias is in the innermost ring of the Council of Cardinals, CBCI Bishops are right in the capital of India, the centre of power. The faithfuls of India are asking aloud what are these red robes doing? They have been pipped to the post by Myanmar and Bangladesh. The first ever cardinal of Bangladesh, Cardinal Patrick D’Rozario of Dhaka said Pope will see church ‘rich in our poverty.’​ As Bangladesh struggles to defend its legacy of interreligious harmony, the country's first-ever cardinal said the pope has handed him a megaphone to influence the culture. “For sure, now they’ll listen to me more, they’ll take my contributions more seriously," said Cardinal Patrick D'Rozario.

What do our stalwarts, the 101 Christian leaders have to say about the Pope giving a go-by to India? They too have failed in giving the right leadership. Did they issue an advisory to the Pope against visiting India? They are yet to do first things first i.e. furnish their contact details to CCV, as if they were non-existent. Isaac Gomes, Church Citizens' Voice).

ROME – Pope Francis will be visiting Myanmar and Bangladesh in late November early December, the Vatican confirmed on Monday. Both countries, with small Christian and even smaller Catholic communities, represent once again his outreach to other religions and to the Asian continent.

Though a detailed program hasn’t been made public yet, according to a Vatican statement announcing the trips, the dates will be Nov. 27-30 to Myanmar and Nov.30-Dec. 2 to Bangladesh. In Myanmar, the pope will visit the cities of Yangon and Nay Pyi Taw, while in Bangladesh only its capital, Dhaka.

The motto for his visit to Bangladesh is “Harmony and Peace.” According to the explanation given, it’s a call to harmony among “religions, cultures, peoples, society, history, heritage and traditions” in the country, while peace refers to that experience, “as well as a future aspiration with a vision of integrated human and spiritual development in Bangladesh.”

“Love and Peace” this is the motto of Francis’s visit to Myanmar. “Christian peace is founded on Love,” says the statement released by the Vatican. “There cannot be peace without love. Love, which the people of Myanmar value most, will pave the way to peace. The visit of our Holy Father is to promote Love and Peace in Myanmar.”

After the trip was confirmed, Bishop Paul Ponen Kubi of Mymensingh, Bangladesh, told Crux that the “tiny minority” that is the Church in his country lives in communion with the universal Church, and also “in harmony and peace with different cultures, religions and society.”

The bishop also said that Francis’s visit will be “witness of our harmony and peace and it will greatly strengthen our faith and give great impetus and encouragement to our country and all peoples.”

For a pope who’s on the record saying he wasn’t going to do much travelling, Francis has collected an outstanding number of stamps in his passport since 2013. This tour will be Francis’s 21st international outing, and the fourth one this year, after his upcoming trip to Colombia. To date, he’s visited a grand total of 28 countries and every habitable continent except Oceania.

Last year, Francis told journalists he intended to visit India and Bangladesh in 2017, but it took longer than anticipated to work out details with the government of Prime Minister Narendra Modi, a strong Hindu nationalist who’s at times been seen as hostile to the country’s small Christian minority.

Both Asian countries have very small Christian communities, and even smaller Catholic ones.

In the case of predominantly Buddhist Myanmar, there are around 450,000 Catholics in Burma, less than 1 percent of the total 53 million. Bangladesh, on the other hand, has a majority Muslim population, and the estimated 350,000 Catholics represent less than 0.2 percent of the 163 million total. In both countries the systemic discrimination in employment and poverty among Christians is widespread.

Yet Francis, often dubbed the pope of the peripheries, has been close to the Catholic Church in both countries, creating first-ever cardinals for both nations: Cardinal Charles Bo in Myanmar and Cardinal Patrick D’Rozario in Bangladesh.

Speaking with Crux earlier this month, D’Rozario had confirmed that the possibility of a papal trip to Bangladesh was being considered. “The Church of Bangladesh is joyfully awaiting the Holy Father’s visit,” he said at the time. “The Holy Father comes as a religious leader, as a pilgrim.

An image of young Christians in Bangladesh in October 2013. (Credit: Stock image)

“Bangladesh is a Church of the poor, for the poor,” D’Rozario said, while insisting it’s “poor in Spirit, but there is a richness in our poverty.”

As a head of state, the pope cannot visit a country without an invitation from the national government. However, as is often the case, particularly in countries where Catholics represent such a stark minority, protests and warnings against the visit have already been voiced.

In recent days, as rumors regarding a possible papal visit began to spread, Buddhist nationalist groups in Myanmar warned the pontiff against using his visit to champion the case of the Rohingya, the Muslim minority in Rakhine State that many Buddhists insist are illegal immigrants from neighboring Bangladesh.

The persecuted Rohingya Muslims, who’ve been migrating from Myanmar to Bangladesh for years, have long been close to Pope Francis’s heart. During his Sunday Angelus in St. Peter’s Square this week, he asked those gathered to pray for the persecuted Muslim Rohingya minority and expressed his closeness to them. His appeal followed the “sad news of the religious persecution of our brother and sister Rohingya.”

Francis has consistently spoken about the Rohingya during interviews, his daily morning Masses, Angelus addresses and his Wednesday general audiences.

On Feb. 8, the pontiff asked the pilgrims gathered for his general audience to pray with him “for our brother and sister Rohingya. They were driven out of Myanmar, they go from one place to another and no one wants them.

“They are good people, peaceful people; they aren’t Christians, but they are good. They are our brothers and sisters. And they have suffered for years,” he said, “tortured and killed” simply for carrying forward their traditions and Muslim faith.

British news agency Reuters reported last week that residents, aid workers and monitors were saying Muslims in the Rakhine village of Zay Di Pyin had been blocked from going to work or fetching food and water for the last three weeks, although a small number had been allowed through the blockade to buy provisions on Tuesday.

“There is no Rohingya ethnic group in our country, but the pope believes they are originally from here. That’s false,” said Ashin Wirathu, leader of the nationalist Buddhist movement, Ma Ba Tha.

Often described as the “Buddhist Bin Laden,” he also said he considered the pope’s visit, which at that point hadn’t been confirmed, as “political instigation.”

Since 2012, the Rohingya have been fleeing Myanmar in the face of rising levels of persecution, including rapes and extra-judicial killings. A UN report in February described their situation as a possible “genocide” and a set of “crimes against humanity” in Myanmar, where the Rohingya are officially categorized as Bengali “interlopers” despite the fact they’ve lived in Rakhine for generations.

Francis’s visit to Myanmar will be the first by a pope. Up until this year, the Holy See had no diplomatic relations with this Asian nation. Earlier this year, soon after the pontiff welcomed Myanmar’s State Counselor Aung San Suu Kyi, the country’s de facto leader, on May 4, the joint decision to establish formal diplomatic ties was announced.

Two popes have previously visited Bangladesh: Pope Paul VI did so in November 1970, when the country was still East Pakistan, and Pope John Paul II went in November 1986.

Other Bangladeshi bishops also expressed delight Monday over the confirmation that Pope Francis is indeed coming.

“The whole of Bangladesh is very happy with the news of the Holy Father’s visit,” said D’Rozario on Monday.

“It’s not just Christians [who are excited], but also peoples of other faiths because of our cultural identity,” D’Rozario told Crux. “Harmony is deep-seated in our culture.”

He compared that emphasis on harmony to an organ: “The tune is always inside it, but you need someone to press the keys,” he said. “Pope Francis’s coming to Bangladesh is like touching the key.”

In that sense, D’Rozario said, the papal trip will amount to a “celebration of harmony,” as well as a “spiritual renewal for our church.”

“We are all grateful that the Holy Father is coming,” he said. “Harmony and peace has been our heritage for many, many years even if recently there have been incidents” that cut in another direction.

“Side by side and together with all peoples of different confessions, cultures, societies have been highly regarded and treasured here,” Costa told Crux. “Even our government says that religion is for each one, but the country is of and for all.”

“We are a tiny minority,” he said. “The pope will strengthen us in our faith and in our love for Christ, and strengthen our bonds with peoples of other religions, cultures, and traditions to continue to witness to harmony and peace.”

Nirmala Carvalho contributed to this report.