Pope to youth:“No to populism, today it’s fashionable but it leads to closing doors hands” 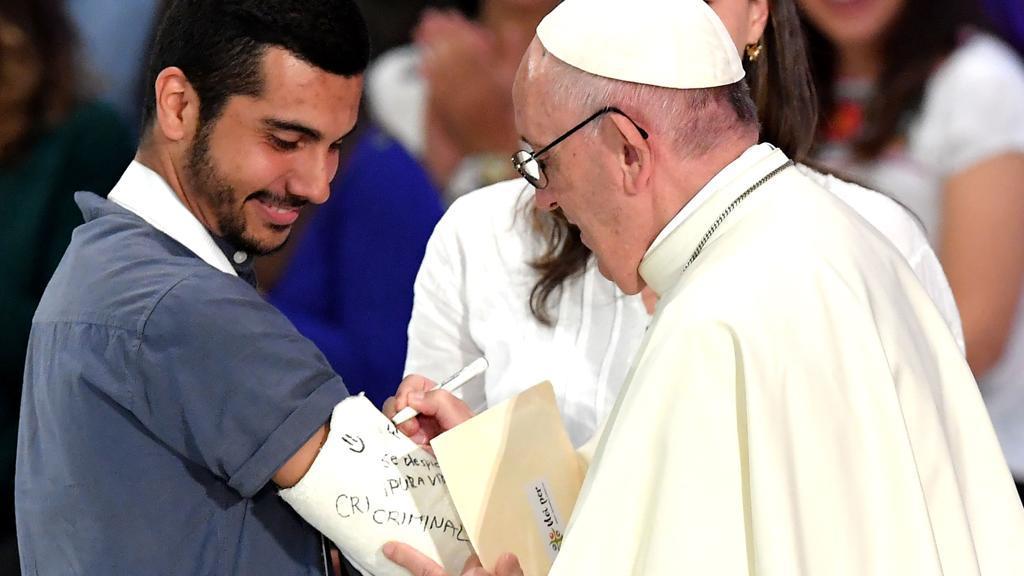 From Vatican Insider – The Vatican

Francis at the meeting for the Synod “WE FOR. Unique, supportive, creative”: “You are priceless, you are not goods for auction”. He then warned about the dangers of the web, “if it makes you liquid, it is better to cut it off”

You can be alone siting  round a dinner table, if you are immersed in your mobile, he warns youngsters. He exhorts them to talk to grand parents to learn from the past and snubs  elderly clerics who preach “Beatitudes” and practise “the most princely and scandalous clericalism"  Clericalism with pomp and show with other worldly dress they put on is clerical worldliness.

It looks he is speaking directly to our Episcopal class who appear in public in strange  shining  dress in silk and satin and RED (danger sign?) At the sight of them youngsters shout: “Here comes the clowns” in the drama, according to Bishop Alex Dias (of Port Blair) who wrote in his article, and wants to be called just “Alex” his pet name. Are our bishops listening? No, they never will, if we are to go by our past experience. But we can’t stop repeating for that matter.

His most important message to youth is not to get themselves be colonized and enslaved by elders who still follow their traditional masters and live in the past, saying ‘Old is Gold.’ Youth instead have be bold and outspoken about what alienates them from the Church. Only question is if the top brass is ready to listen and learn. james kottoor, editor, church citizens' voice.

Read below the Vatican Insider

VATICAN CITY: From a chair in the hallway of the Paul VI Hall, in the front row among young people and synod fathers, Pope Francis attended for over an hour to the songs, dances, testimonies, films and sketches that mark the meeting "WE FOR. Unique, supportive, creative". It is the event promoted by the General Secretariat of the Synod and the Congregation for Catholic Education, a real kermess through which boys and girls from all over Italy, Europe and the world want to thank the Pope for having dedicated to them the great assembly of bishops.

Between video stories and piano music, jokes and a brief performance of a priest dancer from Ecuador, Bergoglio listens to the fragments of the lives of some young people aged 20 to 30 years: almost all of them are stories of suffering and rebirth through faith, of those who were once slaves to drugs or sex , or bullied or victims of cancer, or had a difficult childhood, or celebrated his eighteenth birthday in a prison cell, or of those who now live in a refugee camp on the border of Syria.

Those same boys and girls – one with a cast on his arm which the Pope signed – then symbolically hand over to him in a white envelope containing their questions on how to face the challenges of society, politics, the Church. Questions that Francis, who takes the floor at the end of the "festival", answers entirely impromptu leaving aside his written speech. He immediately jokes: "Here are the written questions, the synod fathers will give the answer because if I gave the answers here, I would call the Synod off! The answer must come from everyone: from our discussion. Above all, these answers must be made without fear".

Then the Pope asks the young people for courage, coherence and concreteness. But first he warns against the danger of populisms that make us see the other, the foreigner, as evil, as an enemy to be pushed away. "Today – he says – populisms are fashionable, which have nothing to do with the "popular": popular is the culture of the people that is expressed in art, in science, in celebration: every people celebrates in its own way. But populism is the opposite: it is a model of closure: "We are closed, we are alone", and when we are closed we cannot go forward". How can we overcome this mentality of closure, this mentality that leads to "making the weakest slaves", that leads to "closing not only the doors, but also the hands"? "One wins with an embrace, with welcoming, with dialogue, with the love that is the word that opens all doors", Bergoglio says.

With the same vigour he also warns about the dangers of the web: "It's true – he says – the interconnection with digital is safe, it's quick, but if you get used to this you'll end up like those families sitting at the table, at lunch or dinner, each one holding a mobile phone, talking to others with a mobile phone, without a concrete, real relationship". This does not work, Pope Francis repeats. "Every road that you will take, to be safe must be concrete", because it is the concreteness that "brings you forward".Therefore "if the media, if using the web takes you “out”, if it makes you "liquid", then cut it off!

Speaking of concreteness, the Pope invites – as always in meetings with the youth – to recover and strengthen their roots through dialogue with the elderly. Almost moved by a photo of a boy with his grandfather shown during his testimony ("it is the most beautiful message of the evening," he says), Francis exhorts: "Talk to your grandparents, talk to the elderly, this will make you happy. They are the roots of your concreteness, of your growing, blooming and bearing fruit. And everything that the tree has in bloom comes from what is buried in the ground. I didn't say that, a poet said it".

Again the Pontiff, drawing inspiration from the questions of the participants in the meeting, speaks of the "coherence of life", saying he regrets the fact that young people are scandalized by "seeing an inconsistent Church, a church that preaches the Beatitudes and then falls into the most princely and scandalous clericalism". "If you are a Christian, take the Beatitudes and and put them into practice.And if you are a man or a woman who has given life, you have consecrated it, even if you are a priest – even a priest who dances – and you want to live as a Christian, follow the path of the Beatitudes not that of worldliness, of clericalism, one of the ugliest perversions of the Church", Pope Bergoglio says.