Pope to sick children: Don’t be afraid to ask God ‘Why?’ 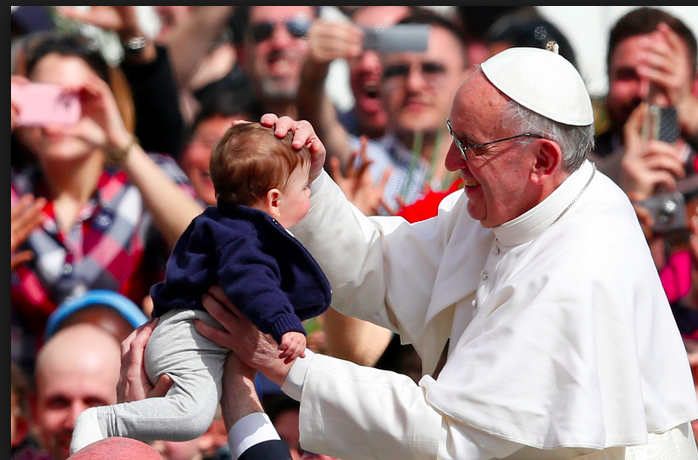 By Ann Schneible, May 30, 2015 / 12:16 pm (CNA/EWTN News).- “Why do children suffer?” Pope Francis asked this of a group of children with serious illnesses or disabilities and their parents, some of whom had been told to abort their babies because of their condition.

The Holy Father answered with a question he might ask God while gazing at the Cross: “Why is Your Son there?”

“It is the mystery of the Cross,” he said.

The pontiff made these remarks during a meeting on Friday evening with the children in the chapel of the Vatican’s Santa Marta residence. They were accompanied by the parents, as well as volunteers from Unitalsi Lazio — a national Italian organization that transports the sick to Lourdes, France and other international shrines.

Most of the children were between the ages of seven and fourteen, although some were just a few years old.

Pope Francis told the children to not be afraid of asking and challenging God “Why?”, even if the only answer God gives is: “Even my Son suffered.”

“But this is the answer,” the Pope said. “And your strength is there: the loving gaze of the Father.”

One might ask how it is that he, as Pope — who has studied a great deal of theology — does not have the answer.

“No. The Trinity, the Eucharist, God’s grace, the suffering of children is a mystery,” he said. “And one can enter into the mystery only if the Father looks upon us with love.”

Pope Francis expressed his admiration for their strength and courage. He recalled how some of the parents present had said they had been told to have abortions, but refused because their children had the right to live.

“Never, never does killing a person resolve a problem. Never.” The pontiff compared this sort of procedure to the Mafia’s approach to problems.

Pope Francis assured those present that he “accompanies” them on their courageous journey, which is a cross, and thanked them for their example.

In a world marked by a culture of waste, he continued: “You are the little heroes of life.”