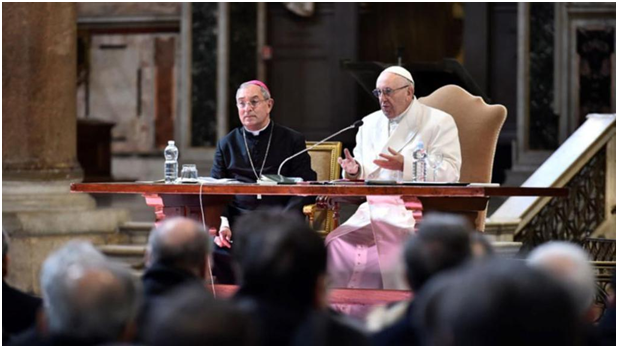 Cover photo : The Pope meets the priests of Rome in San Giovanni in Laterano, at his side Cardinal De Donatis (archive photo)

Note: In the few paragraphs below the Pope is making  exclamatory remarks about the appalling state of Clerical Sex abuse all over the world. What it reminds me is of the innocent cry of the child watching the show: “The King is naked!” Only the pure of heart will see God!

What is striking here is, that the POPE says it himself! For the past many months the whole world was shouting ad nauseam, that the Catholic Clerical class  — from top cardinals to just ordained priest — en mass has drowned itself to the depths of sexual depravity disfiguring beyond repair their priced jewel of celibacy and irrevocably destroying their credibility before the public to zero.

Pope sees it, says it

When such criticisms come  from the general public no one generally takes it seriously. But this time, it is the Pope himself,  honest and humble to the core like a child, who says it. He names names saying “newspapers of the whole world are now full” of such stinking news exposing their “nudity, hypocrisy and lack of credibility”  of the clerical class.

This is a radical shift in the view of the highest authority in the Church. In preparation for the Vatican Summit several Bishops’ meets in US wanted to vote for concrete action and bring them to the Summit, but Francis had suggested to delay voting. Similarlly German group of bishops have been discussing radical ways and means like ‘abolition of celibacy for priests’ for “zero-tolerance” of sexual aberrations.

This is something seriously mooted also by Cardinal Marx, president of the German Bishops’ Conference, priests and people in Germany. So all look to 2019 as an year of radical change both in preaching and practice, in belief and teaching in the Catholic Church. The goal is to arrest the fury of the  noxious sexy winds and waves buffeting  the Bark of Peter to cause a Titanic-like ship-wreck which must be arrested at all costs!

Pope sees sexual aberrations — whether of the highly placed or lowly placed in the church —  as a process in which Jesus is purifying his  bride – the whole ecclesial body including you and me — from arrogance, better-than-thou attitude,  hypocrisy, spirituality of appearance, nay stark NUDITY of child Jesus in Madona’s arms and prays to cover all these  as his own nudity and aberrations.

Are we ready like Francis, to identify ourselves with the most shameful clerical abuses and strive to reform ourselves as co-responsible persons? Here lies the core of authentic Jesus-like reform, which Papa Francis personifies in himself! james kottoor, editor CCV.

“I share with you the pain and unbearable punishment that the wave of scandals of which the newspapers of the whole world are now full, is causing in the whole ecclesial body “. “Let us not be discouraged, the Lord is purifying his Bride” and “is saving us from hypocrisy”.

These grieving words were uttered by the Pope to the priests of the Diocese of Rome, all gathered this morning in the Basilica of San Giovanni in Laterano for the traditional meeting at the beginning of Lent. A sincere dialogue, behind closed doors, during which Bergoglio, flanked by Vicar Angelo De Donatis, did not answer questions as in previous meetings, but spoke for about half an hour following a written speech interspersed with several impromptu sentences. Before that, the Pontiff personally confessed numerous priests.

Then he decides to confess to the priests of “his” diocese, his own state of mind burdened by the recent scandals of abuse, rekindled by the condemnation at the end of February of the Australian Cardinal George Pell and that of a few hours ago of the Archbishop of Lyons, Cardinal Philippe Barbarin, without forgetting the various cases in Chile, in the United States and in various European countries.

“It is evident that the true meaning of what is happening is to be sought in the spirit of evil, in the enemy who acts with the pretence of being master of the world”, said the Pope according to what was reported to Vatican Insider by some present in the Basilica. “Yet let us not be discouraged, the Lord is purifying His Bride, He is converting us all to Himself, He is putting us to the test for we to understand that without Him we are dust, He is saving us from hypocrisy, from the spirituality of appearances. He is blowing his Spirit to restore beauty to his Bride, surprised in flagrant adultery.

“Sin disfigures us and with sorrow we live the humiliating experience when we ourselves or one of our brother priests or bishops falls into the bottomless abyss of vice, corruption, or even worse of the crime that destroys the lives of others,” said Francis.

He expressed, however, confidence in the future, especially in this beginning of Lent which “is a time of grace, because we place God back at the center. “We are a people of wretches made rich by the poverty of God. But without God we can do nothing. He is the center,” he said.

We must turn to Him “face to face”, the Pope recommended. Because “God knows our shameful nudity”. Bergoglio said that he was strongly impressed to see the original copy of the icon of the Odigitria of Bari, during his visit in June 2018. Jesus “was not dressed as now, in the oriental garments of the icons… The Madonna had the child naked, I liked it so much that I asked for it. The bishop of Bari gave it to me as a gift (a copy, ed.). I put it there in front of my door. In the morning when I get up, and pass by it, I like to say to Our Lady to guard my nudity: “Mother, you know my nudity”.