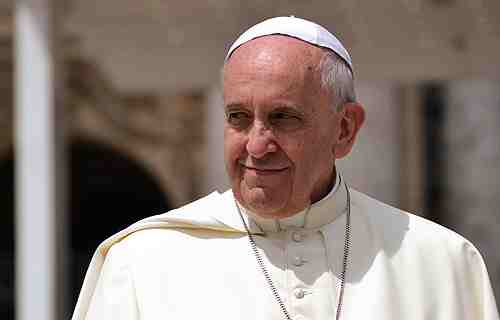 By Ann SchneibleMexico City, Mexico, Feb 13, 2016 / 09:46 am (CNA/EWTN News).- Pope Francis marked his first full day in Mexico by urging the nation's leaders and diplomats to protect the future of the nation's young people.

“A people with a youthful population is a people able to renew and transform itself; it is an invitation to look to the future with hope and, in turn, it challenges us in a positive way here and now,” the Pope said Saturday.

Young people make up more than half the nation's population, the pontiff observed, emphasizing the responsibility to forge a future through the work of men and women today “who are upright, honest, and capable of working for the common good.”

“Experience teaches us that each time we seek the path of privileges or benefits for a few to the detriment of the good of all, sooner or later the life of society becomes a fertile soil for corruption, drug trade, exclusion of different cultures, violence and also human trafficking, kidnapping and death, bringing suffering and slowing down development.”

The Feb. 13 meeting at the National Palace with Mexico's president Enrique Peña Nieto, the country's diplomatic corps, and civil and social authorities, was the first event of the Pope's second day in Mexico.

Pope Francis' Feb. 12-17 trip to Mexico is his first as pontiff. He is the third Pope to visit the nation: St. John Paul II visited Mexico five times over the course of his 27 year pontificate, and Benedict XVI in 2012.

During his address, Pope Francis reminded the authorities that his visit to Mexico is “as a missionary of mercy and of peace,” and as a “son who wishes to pay homage to his mother, the Blessed Virgin of Guadalupe, and place himself under her watchful care.”

The Pope paid his respects to the Mexican people, and the “land which is so rich in culture, history, and diversity.”

A nation “with abundant natural resources and with an enormous biodiversity,” Mexico's geographical location and indigenous multiculturalism fosters an “ancestral wisdom” one of the country's “greatest biographical resources,” the Pope said.

“It is an identity that learned gradually how to shape itself amid diversity and that now constitutes, without any doubt, a rich patrimony to be valued, encouraged and protected.”

Throughout its history, the Mexican people overcame challenges brought about by the “obstinacy of individualism” by recognizing the need for “political, social and financial institutions” to be in agreement with “all men and women committed to the common good and the promotion of the dignity of the human person.”