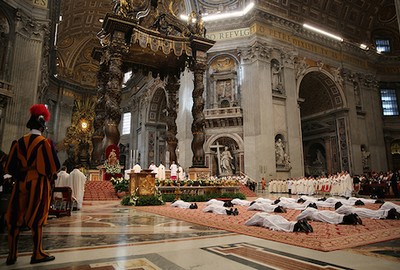 Francis urges new priests to nourish congregations with homilies, while making sure they are not bored.

Pope Francis presided over the ordination of nearly twenty men to the priesthood on Sunday, where he warned them against being vain priests who live first for their own pleasure rather than for God’s.

“A priest is ugly who lives for his own pleasure,” the pope said, adding that such a priest “acts like a peacock”.

Pope Francis presided over the Mass in St Peter’s Basilica, during which he, as the bishop of Rome, ordained 19 men for the Roman diocese.

During the ordination Mass, the pope delivered the standard homily based on the Italian edition of the Pontificale Romanum for the ordination of priests, but digressed from the text several times to offer advice to the men about to be ordained.

In these remarks, he said priests should nourish God’s people with their homilies, while making sure they are not bored.

The pope also warned against proclaiming God’s Word without giving a good example.

“Words without example are empty words,” he said. “They are ideas that do not reach the heart, and may even cause injury.”

Pope Francis gave the men further advice in executing their responsibilities as priests.

In presiding over Mass, he told them not to “rush” through the celebration. Rather: “Imitate that which you celebrate,” because “it is not an artificial rite.”

Speaking of their responsibilities as priests in distributing the Sacraments, the pope said to “never refuse Baptism to whoever asks for it”.

With regard to the sacrament of Penance, he told the new priests the confessional is a place where they are called “to forgive, not to condemn.”

“Imitate the Father who never tires of forgiving”.

After the Mass, Pope Francis delivered his Regina Caeli address from the Papal Palace overlooking Saint Peter’s Square, explaining that the newly ordained priests are called to have a pastoral life based upon the Good Shepherd.

Recalling how the Fourth Sunday of Easter is also known as “Good Shepherd Sunday,” the pope said this day is an occasion to reflect on Jesus’ gift of Self, through His passion, death, and resurrection.

The Good Shepherd, he said, “gives life, has offered his life in sacrifice for all of us”.