Pope to teens: There isn’t a phone app for love and happiness 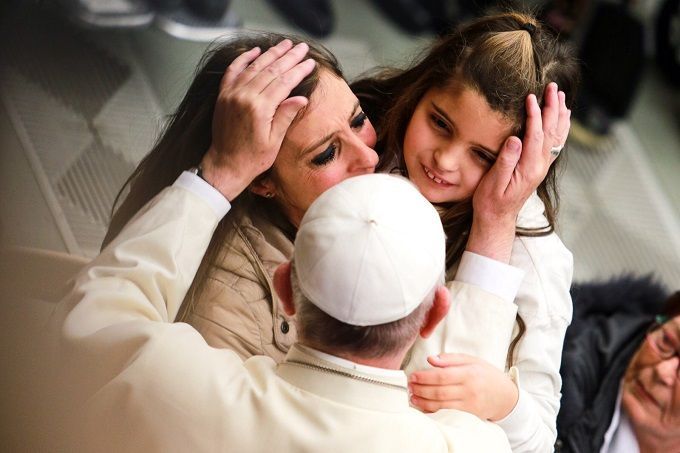 By Ann Schneible Vatican City, Apr 24, 2016 / 07:04 am (CNA/EWTN News).- Freedom does not come from things we possess or from doing whatever we want, Pope Francis said Sunday in his homily for the Jubilee for boys and girls. Rather, true freedom and happiness can only be found in the love of Jesus.

“Your happiness has no price,” the Pope said during Mass in St. Peter's Square. “It cannot be bought: it is not an app that you can download on your phones nor will the latest update bring you freedom and grandeur in love.”

“That is because love is a free gift which calls for an open heart,” he said. “It is a noble responsibility which is life-long; it is a daily task for those who can achieve great dreams!”

Francis challenged the young teens to not “be content with mediocrity,” or believe those who equate importance with the sort of toughness shown by heroes in films, or by wearing the “latest fashions.”

“Don't believe those who would distract you from the real treasure, which you are, by telling you that life is beautiful only if you have many possessions.”

Delivering his homily to the over 90,000 people overflowing the Square, Pope Francis assured the teens that, because of their friendship with Christ, they are never alone.

“Even if you disappoint him and walk away from him, Jesus continues to want the best for you and to remain close to you; he believes in you even more than you believe in yourself.”

“The biggest threat to growing up well comes from thinking that no one cares about us, from feeling that we are all alone,” he said. “The Lord, on the other hand, is always with you and he is happy to be with you.”

Moreover, Jesus calls young people to follow him, just as he did the first disciples, the Pope added. “Jesus is waiting patiently for you. He awaits your response. He is waiting for you to say 'yes'.”

The Jubilee for boys and girls, geared specifically towards young teenagers, is the latest initiative for the Holy Year of Mercy, which began on December 8. The three-day event started Saturday with the sacrament of reconciliation in St. Peter's Square – where Pope Francis himself heard confessions — followed by a youth rally in Rome's Olympic Stadium.

In his homily, Pope Francis stressed that love is the “Christian's identity card,” and is “the only valid 'document' identifying us as Christians.”

“If this card expires and is not constantly renewed, we stop being witnesses of the Master,” he said.

Those who wish to be Jesus' disciples, to be “his faithful friends,” and to “experience his love,” must learn how to love from him.

Going off the cuff, the Pope said that Jesus' “true friends” stand out because theirs is a “genuine love that shines forth in their way of life,” through “real actions.”

“Those who are not real and genuine and who speak of love are like characters is a soap opera, some fake love story,” he said.

“Before all else, love is beautiful, it is the path to happiness,” Pope Francis said, but he warned that this path is also demanding and “requires effort.”

The Pope gave the example of everyone who has given us a gift, invested time, and sacrificed for our sake. He cited in particular the sacrifices made by the parents and group leaders who organized the pilgrimages to Rome for this weekend's Jubilee for boys and girls.

“To love means to give, not only something material, but also something of one’s self: one’s own time, one’s friendship, one’s own abilities.”

Addressing the teens present at the Mass, Francis acknowledged their “growing desire to demonstrate and receive affection.”

“The Lord, if you let him teach you, will show you how to make tenderness and affection even more beautiful,” the Pope said.

Moreover, this love is not possessive, but allows the other person freedom. “There is no true love that is not free!” he said in unscripted remarks.

Today's “consumerist culture” reinforces the temptation to “'have to have' what we find pleasing,” the Pope said.

“Yet when we hold on too tightly to something, it fades, it dies, and then we feel confused, empty inside.”

“The Lord, if you listen to his voice, will reveal to you the secret of love. It is caring for others, respecting them, protecting them and waiting for them.”

Pope Francis acknowledged the teenagers “great longing for freedom,” but warned that freedom does not mean “doing whatever you want.”

This interpretation of freedom “makes us self-centred and aloof, and it prevents us from being open and sincere friends.”

“Instead, freedom is the gift of being able to choose the good,” he said. “The free person is the one who chooses what is good, what is pleasing to God, even if it requires effort.”

Pope Francis stressed that love is more than a “sweet poem” we study and memorize, but a “life choice” which must be practiced.

“Love is nurtured by trust, respect and forgiveness,” he said, adding that we grow in love through Jesus, who “gives us himself in the Mass, he offers us forgives and peace in Confession. There we learn to receive his love, to make it ours and to give it to the world.”

“And when loving seems hard, when it is difficult to say no to something wrong, look up at Jesus on the cross, embrace the cross and don’t ever let go of his hand. He will point you ever higher, and pick you up whenever you fall.”

“Throughout life we will fall many times, because we are sinners, we are weak,” the Pope said, again going off script. “But there is always the hand of God who picks us up, who raises us up. Jesus wants us to be up on our feet!”

Pope Francis concluded his homily by speaking about the capability of young people towards “acts of great friendship and goodness,” and challenged them to live their “youth and all its gifts to the fullest and without fear of hard work.”

“Be like sporting champions, who attain high goals by quiet daily effort and practice,” and whose daily routine consists of the works of mercy.

“Enthusiastically practice them, so as to be champions in life, champions of life! In this way you will be recognized as disciples of Jesus.”

Towards the end of Mass, Pope Francis delivered his Regina Caeli address, during which he praised the youth for their “joyful and boisterous witness,” encouraging them to “go forward with courage.”

The Pope also remembered Saturday's beatification in Burgos, Spain of the priest Valentín Palencia Marquina who, along with four others, were martyred for their faith during the Spanish Civil War.

“We praise the Lord for these courageous witnesses and to beseech their intercession to free the world from all violence,” he said.

Pope Francis also expressed his concern for bishops, priests and religious – Catholic and Orthodox alike — who have been kidnapped in Syria. He prayed that God in his mercy would touch the “hearts of the kidnappers,” and release “our brothers and sisters” back to their communities. Leading into the Marian prayer, he asked everyone to pray for these, and all victims of kidnapping through the world.

After reciting the Regina Caeli, Pope Francis once again addressed the young people in the crowd.

“You have celebrated the Jubilee (for boys and girls): Now back home with the joy of your Christian identity. Standing, head held high, and with your ID card in your hands and in your heart!”