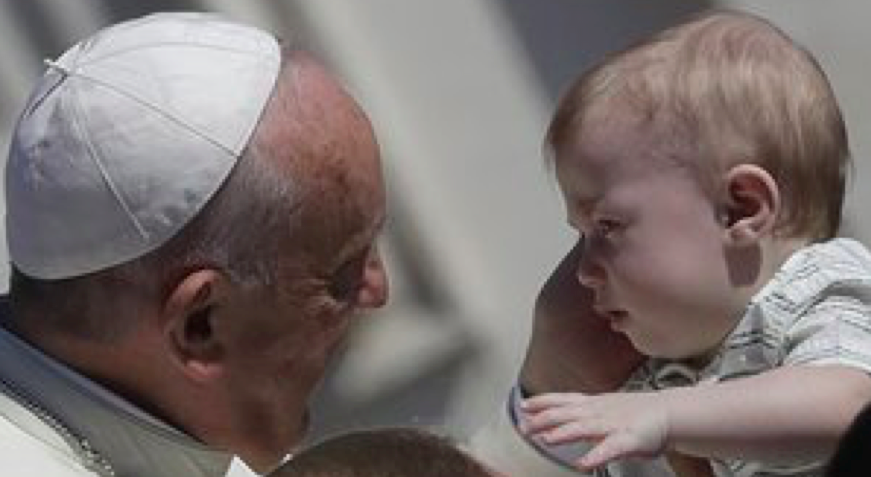 The last time Pope Francis intervened on the issue of divorced and remarried Catholics, he was ambiguous. His new, clear stance will upset conservatives.

Pope ‘agrees that suitably trained priests can decide on their own initiative whether remarried couples are to be admitted to communion even when they are having – brace yourself – sex’.

(Note: Given below are two reports from the Guardian UK, one by  Andrew Brown and another by Stephanie Kirchgaessner, on Pope’s final approval of admitting  the divorced to communion.

Admitting to communion civilly divorced and remarried was the isse the bishops could not resolve after two years of synodal discussions, though Francis and Cardinal Walter were for it, but wanted to get the consensus of bishops. To bring together the fighting factions, the conservative traditionalists led by a group of 7 who even wrote a book to defend their hard position and others willing to accept the hint given by Pope,  he finally wrote his apostolic exhortation, Joy of the Gospel, after the two Synods. Even that failed to produce a consensus.

Papal exhortation also had explicitly said, it was not the final word and it was not closing  all discussion, and Francis himself was not satisfied with the wording of the exhortation. It was when he was waiting for a better lucid explanation, that bishops of Argentina, his home country, came out with a more clear explanation which satisfied Francis and he at once endorsed it saying:

“The document (the Argentenian draft) is very good and completely explains the meaning of chapter VIII of Amoris Laetitia. There are no other interpretations.”  More explanation on the modalities of admitting the divorced and remarried should be forth coming. james kottoor, editor)

Pope Francis has two modes of dealing with opposition – patient manoeuvring, which can go on for years; and sudden blows, delivered in a few short memorable words.

On the question of how to deal with divorced and remarried Catholics, he has been until this week an exponent of persuasion and the long war of manoeuvre. He summoned two meetings of bishops from around the world, in 2014 and 2015, and had them argue with unprecedented ferocity in public over whether and how the Catholic church should recognise second marriages.

Heavyweight cardinals proclaimed that this could not be done. Seven of them published a book just before the second meeting to underline their beliefs. One of the leading conservatives, Cardinal Robert Sarah, compared western sexual liberalism to Isis – both, apparently, sent from the devil: “We need to be inclusive and welcoming to all that is human; but what comes from the Enemy cannot and must not be assimilated. You can not join Christ and Belial! What Nazi-Fascism and Communism were in the 20th century, Western homosexual and abortion Ideologies and Islamic Fanaticism are today.”

Sarah has also demanded that priests celebrate the mass with their backs to the congregation, as they did before the great changes to Catholic worship brought about the second Vatican council in the 1960s. This suggestion was slapped down very firmly and publicly by the Vatican.

‘One of the leading conservatives, Cardinal Robert Sarah, compared western sexual liberalism to ISIS – both, apparently, sent from the devil.

Against the inflexible stance of Cardinal Sarah and other heavyweight conservatives – like the Australian cardinal George Pell – have been a variety of liberal voices, mostly from western Europe but also from parts of the developing world, where families form and reform without much in the way of bureaucracy. The document that appeared from the clash between these two views was a very long and apparently ambiguous summary written largely by the pope himself.

This restated the unchanging doctrine that marriage is a lifetime commitment, but it left open the possibility that the church should recognise that it clearly doesn’t function as one in many societies today. This is what already happens all over the western world. Married couples, where one or both have been married before, are in practice allowed to take communion even when they have not been through the process of “annulment” by which the church declares the first marriage invalid. This has always been something that was much easier for the rich and well-connected to achieve. But the studied ambiguity of the pope’s document, Amoris Laetitia, allowed conservatives to continue to maintain that this didn’t and shouldn’t ever happen.

One right-wing Catholic blogger wrote last year that conservatives are longing for Francis’s death. The pope is 80.

That ambiguity has now ended. In a letter to the Argentinian bishops, who had published a liberal interpretation of the document, the pope says that “there are no other interpretations”. This means that he agrees that suitably trained priests can decide on their own initiative whether remarried couples are to be admitted to communion even when they are having – brace yourself – sex (one of the more delightful conservative positions is that remarried divorcees are of course welcome to take communion providing they aren’t actually  doing it with each another.)

This is a slightly flippant way of looking at the matter, but Francis is not flippant about marriage. He supports these reforms because he believes that second families are sometimes better than broken ones.

But neither are his opponents simply posturing in their opposition to him. One rightwing Catholic blogger wrote last year that conservatives are longing for Francis’s death. The pope is 79. He has only one lung. What he has done may not change doctrine but it ensures that the contest to choose his successor will be extraordinarily bitter, and fought for very high stakes.

Pope Francis has issued a remarkable endorsement of major changes in the way priests approach Catholics who are divorced and remarried, in a move that could open the door to some of them receiving communion.

The Vatican announced on Tuesday that Francis sent a letter to bishops in Argentina on 5 September in which he praised a document they had written that said priests could – in some cases – offer the “help of sacraments” to Catholics living in “irregular family situations” as part of a broader effort to support and integrate divorced and remarried Catholics into the life of the church.

“There are no other interpretations,” Francis wrote. The pope’s praise of the document was the most direct evidence that Francis supports a significant change in the way individual priests deal with divorced Catholics.

Divorce is considered a sin, and the debate over how the church approaches prevalence has become divisive, pitting progressives within the church who espouse a more gentle approach against traditionalists who do not want it to veer from hardline condemnation.

At the centre of the new development is a document that was written and released by Pope Francis in April called Amoris Laetitia, an apostolic exhortation that examined how the church ought to deal with the changing modern family. It was written after the church convened two synods on the family to debate the issues.

In it, Francis said priests and bishops need to rely on their personal judgement about an individual’s circumstances when they determine whether strict church teachings – including about marriage and divorce – ought to apply to the individual. At the time, he said that his apostolic exhortation did not mark the end of the debate within the church, and that the issues were still up for discussion.

But Francis’s latest endorsement of the Buenos Aires document, in effect, a set of concrete guidelines that were written in Argentina and could be seen as a progressive interpretation of Amoris Laetitia, could indicate that Francis is concerned about possible misinterpretations of his document, including by reactionary forces within the church.

The Argentinean bishops did not endorse a change that would allow all divorced and remarried Catholics to receive communion. But they said that, if civilly remarried couples could not abstain from sex, as the church dictates they should , and if they were unable to receive an annulment of their previous marriages, then it would be possible to take a “journey of discernment” that

Francis wrote: “The document is very good and completely explains the meaning of chapter VIII of Amoris Laetitia. There are no other interpretations.  And I am certain that it will do much good. May the Lord reward this effort of pastoral charity.”

The words could be seen as a rebuke of a very different interpretation of Amoris Laetitia that was released by the conservative archbishop of Philadelphia, Charles Chaput.

Chaput released a statement in July in which he said that divorced and civilly remarried Catholics were welcome to accept Holy Communion as long as they abstained from sex and lived out their relationships like “brother and sister”.

Chaput also advised Catholics who were attracted to people of the same sex that they ought to frequently seek penance and could still consider entering heterosexual unions despite having “some degree of same-sex attraction”.