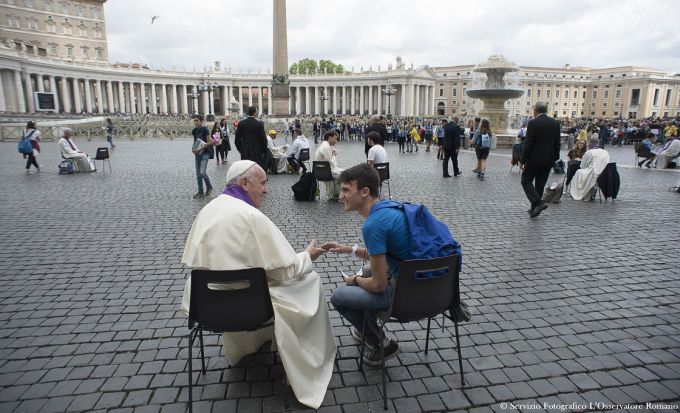 Vatican City, Apr 23, 2016 / 06:11 am (CNA/EWTN News).- Pope Francis on Saturday heard the confessions of young people in St. Peter's Square as part of this weekend's Jubilee for Boys and Girls, an event which is expected to draw tens of thousands of teenagers from around the world.

Sitting on simple chairs out in the open along with other priests just within the Square's colonnade, the Pope offered the sacrament of reconciliation to 16 boys and girls between 11:30am and 12:45, the Vatican press office said. More than 150 priests were in the square to hear confessions, according to Vatican Radio.

This is not the first time Pope Francis has heard the confessions of pilgrims. Most recently, the Pope took part ina penance service during the March 4 “24 Hours for the Lord.”

The Jubilee for Boys and Girls, which is the latest initiative for the Jubilee Year of Mercy, is directed specifically towards young teenagers.

The event began at 11am on April 23 with confessions continuing through to the afternoon, at 6pm, in St. Peter's Square.

Later in the evening, the young people will make their way to Rome's Olympic Stadium for a youth rally, during which Pope Francis will deliver a video message to those taking part in the event.

On Sunday, the Pope will preside over Mass in St. Peter's Square for the teenagers taking part in the event.

The event officially concludes Monday, which is an Italian national holiday.

According to the Jubilee for Mercy website, pilgrims over the course of the three days “will be able to hear witnesses describing their deep experiences of the Works of Mercy in seven piazzas in the City Center of Rome.”

The Jubilee of Mercy is an Extraordinary Holy Year which December 8 – the Solemnity of the Immaculate Conception – with the opening of the Holy Door in St. Peter's Basilica. It will close Nov. 20, 2016 with the Solemnity of Christ the King.