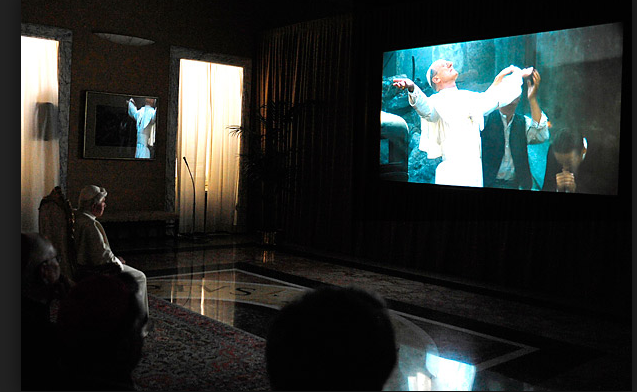 Rome (Matters India)— Pope Francis has claimed that he hasn’t watched TV since 1990 after making a promise to the Virgin Mary.

The Pope said that he didn’t even watch the matches of his football team San Lorenzo de Almagro back in Buenos Aires, but got a Swiss Guard to update him regularly on match results and league table positions.In an interview with an Argentinian newspaper he said there was no particular reason for his vow- he simply decided: ‘It’s not for me.’

He told La Voz del Pueblo: ‘I have not watched TV since 1990. It’s a promise that I made the Virgin of Carmen on the night of 15 July 1990. I told myself: ‘It’s not for me’.There were no exceptions, the Argentinian pope, a card-carrying fan of the football side, insisted. ‘I watch nothing…’There is a Swiss Guard that every week tells me the results and how we are doing in the league table.’

The Pope said that he doesn’t surf the internet either, and reads only one newspaper for ten minutes in the morning, Mailoneline reported .Francis who has kept up a whirlwind of work since his election two years ago has previously claimed that he has not had a holiday since 1994.But he acknowledged in the interview that the workload was taking its toll.

He admitted: ‘I am under pressure. All those in government are under pressure. At the moment I feel the workload. I have a strong pace of work at the moment – it’s the end of the school year syndrome with the focus on getting everything done before the end of June. There are a thousand things to be done and there are problems. ‘

Francis claimed that he had never dreamed of being pope – nor had he dreamed of being president or an army general.’Since accepting the role he missed being able to walk in the street- and go for a pizza. ‘Take-away is not the same, he said. ‘You have to go there.’