Pope Francis to inmates: ‘I too need to be washed by the Lord’ 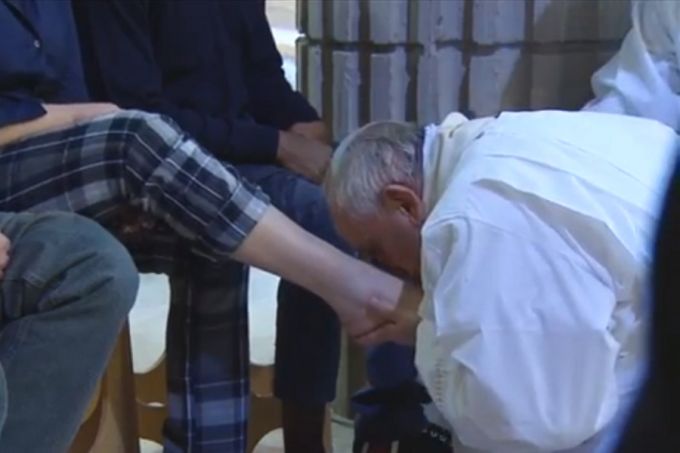 By Elise Harris. Rome, Italy, Apr 2, 2015 / 12:23 pm (CNA/EWTN News).- Pope Francis on Holy Thursday told inmates of a Rome prison that God’s love is personal and endless, emphasizing that he too needs forgiveness and purification.

“Today I will wash the feet of 12 of you, but among these brothers and sisters are all of you, all of you, all–all that live here. You represent them,” the Pope told inmates of the Rebibbia New Complex Prison at the April 2 Mass of the Lord’s Supper.

However, Pope Francis stressed that “I, too, need to be washed by the Lord, so please, during the Mass, pray for me, so that God cleans my dirtiness, so that I, too, can be your slave, at the service of the people, as Jesus was.”

During the ceremony, which took place in the prison’s “Our Father” chapel, the Pope engaged in the traditional washing of feet. The ceremony commemorates the moment before the Last Supper when Jesus washed the feet of his disciples.

Among the inmates who had their feet washed by Pope were six men incarcerated in the prison as well as six women detained in the nearby district prison for women.

In his off-the-cuff homily, Pope Francis reminded inmates that God’s love knows no bounds. He cited the gospel passage about how Jesus had loved his disciples “to the end.”

“Jesus loves us, but without limits, always, until the end,” the Pope said. “The love of God for us doesn't have limits. There is always more, always more. He never tires of loving anyone.”

The Pope then explained that in the time of Jesus, it was the job of the slaves to wash the feet of the guests who came into the house. The Church asks priests to imitate Jesus in assuming the role of the slave by washing the feet of 12 people.

Pope Francis encouraged the congregation to remember “in our heart we need to have the certainty, we need to be sure that when that when the Lord washes our feet, he washes everything, he purifies us, he makes us feel his love again.”

Before calling up the 12 prisoners whose feet he would wash, the Pope emphasized to all present that “among these brothers and sisters are all of you, all of you, all, all that live here. You represent them.”

As Archbishop of Buenos Aires, it was common for Francis to celebrate Holy Thursday Mass in a prison or in any other places for the needy like hospices and slums.

Just after his election a little over two years ago, Pope Francis broke with the papal tradition of celebrating Holy Thursday Mass at the Basilica of Saint John in Lateran and visited a youth detention center instead.

The Mass was traditionally held in the papal basilica as an opportunity for the people of Rome to meet with Rome’s bishop, the Pope.

However, in 2013 Francis accepted an offer from Italian Justice Minister, Paola Severino, to celebrate the liturgy at the Casal del Marmo juvenile detention center, where he washed the feet of 12 young men and women, including a Muslim.

Last year for Holy Thursday Pope Francis visited the St. Mary of Providence Center, a 150-bed residential rehabilitation center for disabled people in Rome. He washed the feet of 12 residents.

The venue for his 2015 Holy Thursday Mass, Rome’s overcrowded Rebibbia New Complex Prison, has an official capacity of 1,200 inmates, but at present it houses some 1,750 people across 14 sections.

The prison  has partnered with the Holy See-owned hospital Bambino Gesù in a call center work education program to help inmates reintegrate into society.