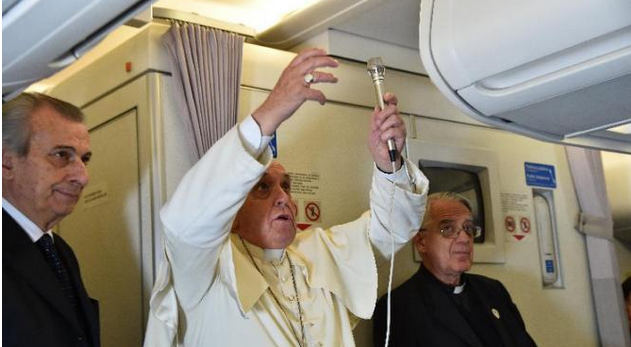 (Note: This Courtesy:AFP, report is  forwarded by Gita A.Bernard, New York​. Francis’s  8-day  whirlwind tour  reminds us of the missionary

journeys of St.Paul and Francis Xavier. Empire-building is not a missionary's business; building the Kingdom of God is. Francis is at it. Some critics are already making a mountain of his plan to chew coca leaves an illegal narcotic to help combat altitude sickness, After all what was Jesus if not a friend  of  drunkards, drug addicts and prostitutes? And how can a true follower of Jesus shy away from such practices for the sake of becoming all things to all to win over all? james kottoor, editor)

Vatican City: Pope Francis embarks Sunday on an eight-day visit to Ecuador, Bolivia and Paraguay, three of South America`s `peripheral` countries which share common challenges in addressing poverty, inequality and the legacies of past authoritarian regimes.

In one of the longest and most gruelling trips of his papacy, the first pontiff from Latin American will deliver more than 20 speeches and sermons and catch seven flights covering a total of 24,000 kilometres (15,000 miles), including one which touches down at an altitude of just over 4,000m in the thin air of the Andes.

It is Francis`s second journey to his native continent following his 2013 visit to Brazil and it is one which will closely reflect the dominant themes of his papacy: concern for the poor, the sick and the dispossessed and opposition to an economic order he sees as perpetuating their plight and damaging the global environment.The latter issue will be highlighted by a series of encounters with representatives of indigenous communities and the use of their languages in some of the religious services.

The trip is also expected to highlight the plain-talking 78-year-old Argentinian`s enormous popularity with those he seeks to help. A number of open air masses in the three countries are expected to attract crowds of between one and two million people.

The first of those will be on Monday, in Guayaquil, Ecuador`s most populous city, where he will also connect with his Jesuit roots by hosting a lunch at one of the 475-year-old order`s colleges where, during his time as Archbishop of Buenos Aires, Francis used to send young priests for instruction.

An even bigger crowd is expected the next day in the capital Quito for another mass, which will include readings in the language of the Quechua people.Francis is due to meet indigenous Andean leaders later that day before a private visit to one of the most famous Jesuit churches, known locally as la Compania. He flies on Wednesday to Bolivia, where the El Alto airport that serves the capital La Paz is situated at more than 4,000 metres altitude.

The thin air causes problems for even the fittest of young people and there have been questions asked as to whether it is wise for Francis, who lost most of one lung as a young man, to risk visiting.Vatican officials stress that he will only spend a few hours there and spokesman Federico Lombardi said the pope himself was not concerned about any health threat."He did not have the slightest doubt about the planning of any of the stages of the trip. He is completely calm about it," Lombardi said.

Francis himself has hinted he may partake of the local custom of chewing coca leaves to help combat altitude sickness, according to Bolivia`s culture minister — a move that will surely raise some eyebrows if he does it in public.The raw ingredient for cocaine, the leaves are listed as an illegal narcotic by many countries while being widely used as a mild stimulant and remedy for various ailments in Bolivia.

On his way from El Alto airport to La Paz, the pope will stop at the site of the March 1980 assassination by the military of Spanish Jesuit priest Luis Espinal, which occurred at a dark time in the region`s history, two days before Salvadoran bishop Oscar Romero was slain.Francis will have a private meeting with Bolivian President Evo Morales before he heads for Santa Cruz de la Sierra, where up to two million are expected to turn out to hear him preach.

The city will also host the second World Meeting of Popular Movements, an initiative launched at the Vatican last year, in the presence of Francis and Morales, a former union official.Among others taking part will be cardboard collectors, workers with no job security, landless farmers, shanty-town dwellers, indigenous people and migrants.

The following day sees the pope visit the huge Palmasola prison, the scene of violent gang fighting in 2013 which left 31 people dead.In Paraquay, the final leg of the trip, the highlights will include a visit to one of the poorest districts of Asuncion, Banado Norte and a mass in which prayers will be said in Guarani, another indigenous language, with 1.5 million predicted to attend.