Pope Francis reveals how he shrugs off stress: ‘I’m not on tranquillisers’ 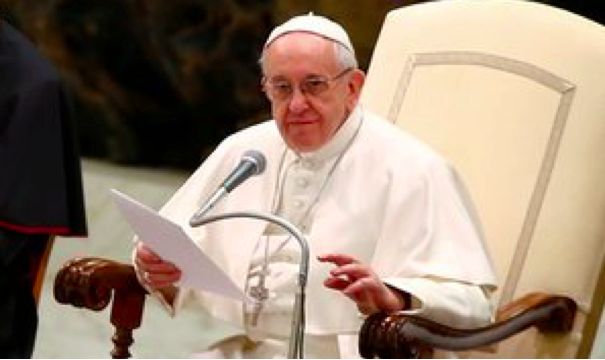 Stress taken care of by st. Joseph –  Pontiff tells how anxiety he sometimes experienced as bishop of Buenos Aires disappeared after his elevation to papacy

Francis: ‘There is corruption in the Vatican. But I am at peace’ Photograph: Tony Gentile/Reuters

(Note: As we have already written in the earlier post Francis’ bitter critics like US Cardinal Raymond Burke and his political Italian ally Matteo Salvini, the right wing Italian nationalist who is a staunch supporter of  US President Trump are now out in the open supporting the right wing Catholics in the Church and politicians in society.

Indirectly at least Francis admits that they give him stress and sleepless nights. On those occasions he writes letters to St.Joseph and make him rest sleeplessly on those letters while he sleeps peacefully in his bed. That Is the tranquilizers he uses to get sleep.

What we all can do is to pray for both Cardinal Burke and President Trump so that they get better light from Jesus the Light of the World. Probably He is just sleeping away purposely in the boat of Peter to teach both Trump and Burke a bitter lesson, and in desperation to go and shout: “Lord, Lord, wake up please, the Bark of Peter is sinking, please wake up and save us.” james kottoor, editor)

Pope Francis has shrugged off recent reports of in-fighting in the Vatican and other stresses of his job, joking: “I am not on tranquilisers.”“There is corruption in the Vatican. But I am at peace,” the pontiff said in an interview with Italy’s Corriere della Sera, published on Thursday.

In unusually revealing comments, the erstwhile Jorge Bergoglio reveals how feelings of anxiety he sometimes experienced while he was bishop of Buenos Aires disappeared after his elevation to the papacy. And he insists that he is losing no sleep over the manoeuvring of conservatives opposed to his reforms of church teaching and governance.

The 80-year-old says his secret for dealing with stress is to write down all his problems in letters to Saint Joseph. He then places the missives under a statue of the man described in the Bible as the carpenter father of Jesus.

“And now he is sleeping on a mattress of letters! That’s why I sleep well: it is the grace of God. I always sleep six hours. And I pray,” Francis said. The pope’s reform drive has run into opposition from conservative cardinals and entrenched interests within the Vatican bureaucracy. Tensions have appeared to be running particularly high of late.

Francis last month dismissed the head of the Knights of Malta after the ancient order challenged his authority in a dispute seen as being linked to a broader row over the direction of the church.And the last week has seen a series of anti-pope posters plastered all over Rome. Asked how he dealt with such tensions and the challenges he faces, Francis quipped: “I’m not on tranquilisers.

A powerful American cardinal (Burke) who is engaged in a bitter feud with Pope Francis has met Matteo Salvini, the rightwing Italian nationalist who is a staunch supporter of Donald Trump and has praised Benito Mussolini. The reported meeting between Cardinal Raymond Burke and Salvini, the head of the Northern League party, is a sign that intense divisions between traditionalists and the pope are becoming increasingly political

Pope Francis’s harshest critics are aligning themselves with Trump and his acolytes around the world, including Matteo Salvini

Cardinal Burke, the unofficial head of the most conservative elements within the Catholic church, praised Trump after his election. Photograph: Alessandro Bianchi

Pope Francis’s allies in the church, who back his message of inclusion and support for immigrants, are speaking out against the US president’s travel ban against refugees and immigrants from majority-Muslim countries. Cardinal Joseph Tobin of Newark, New Jersey, who was recently promoted by Francis, called Trump’s executive order “the opposite of what it means to be an American.” Tobin has also suggested that Trump is a conman.

“The Italians offer a good lesson – to live in peace you need a healthy ‘couldn’t care less’ attitude. I don’t mind telling you that what I am going through is a completely new experience for me.“In Buenos Aires I was more anxious, I admit it. I felt more tense and worried. Basically I wasn’t like I am now.”

“From the moment I was elected I had a very particular feeling of profound peace. And that has never left me. I am at peace. I don’t know how to explain it.” In what may have been an allusion to opponents led by the US cardinal Raymond Burke, Francis implied he had made his intentions clear in meetings with other senior clerics before his election. “In the general assemblies we discussed the Vatican’s problems, we discussed reforms. Everyone wanted them,” he said.