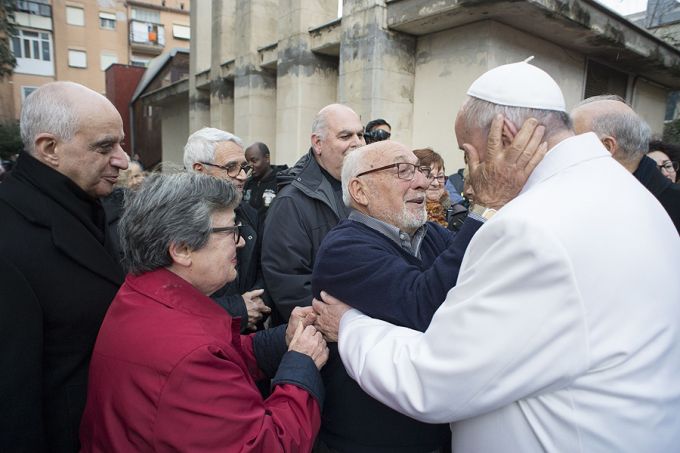 Vatican City, Jan 15, 2016 / 01:05 pm (CNA/EWTN News).- True to form, the pope of the surprise papal visit dropped by two different nursing homes in Rome unannounced on Friday. The visits kicked off the Pope’s monthly works of mercy, which he plans to do on Fridays during the Jubilee Year of Mercy.

The Pope’s first visit on Friday, Jan. 15 was to the Bruno Buozzi Retirement Home on Via di Torre Spaccata, on the outskirts of Rome, which houses 33 elderly people.

Pope Francis was able to speak briefly with each person during his visit. He was accompanied by Archbishop Rino Fisichella, President of the Pontifical Council for the Promotion of the New Evangelization.

Before returning to the Vatican, the pope made a second surprise stop at the “Casa Irde,” a home where six persons in a vegetative state live with their families and are provided assistance.

According to a Vatican statement, with these visits, Pope Francis wanted to emphasize the great importance of elderly persons, of grandparents, and the value and dignity of life in every situation.

In December, Pope Francis said in an interview with the official website for the Jubilee of Mercy that he would be making “different gestures” of mercy once a month on Fridays during the Holy Year.

“The revolution of tenderness is that which, today, we must cultivate as a fruit of this year of mercy: the tenderness of God toward each one of us,” the Pope told the official Jubilee publication ‘Credere’.

That the first of his Friday visits were a surprise should not be, well, surprising, to anyone who’s been following Francis’ pontificate.m early on in his pontificate, Francis has been surprising the people of Rome by showing up in unexpected places – to pay his hotel bill, to get some new glasses – to the delight of many.

In July 2014, the Pope showed up unannounced at a Vatican cafeteria to lunch with some blue-collar employees of the Holy See.

In February of last year, Francis surprised residents of the Arcobaleno shantytown with a visit before making his way to say Mass at the Roman Parish of San Michele Arcangelo.

In Oct. 2015, Pope Francis paid an inaugural – and, yes, surprise – visit to the “Gift of Mercy” house, a newly built Vatican shelter for homeless men.