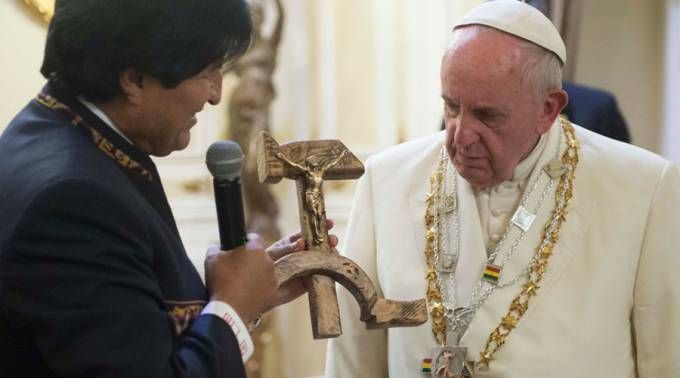 By Alvaro de Juana and Elise Harris. La Paz, Bolivia, Jul 9, 2015 / 10:45 am (CNA/EWTN News).- When leftist Bolivian president Evo Morales on Thursday presented Pope Francis with a “communist crucifix” – a carving of Christ crucified on the hammer of a hammer and sickle – the Pope appeared to say, “This is not ok,” while shaking his head.
Shortly after his July 8 arrival at the Bolivian administrative capital of La Paz, Pope Francis made a courtesy visit to Morales at the Palace of Government. At such meetings, the leaders customarily exchange gifts; Pope Francis gave the Bolivian president a mosaic of the Marian icon of the “Salus Populus Romani,” her role as patroness of Rome.
Morales explained what his gift to the Pope was as he gave it to him. In the video, filmed by the Vatican Television Center and transmitted throughout the world, the Pope appears to be saying “No está bien eso” – “This is not ok” – while shaking his head.
While the audio is a bit marred by the clicking of journalists' cameras, the embarrassment of the Pope seems clear.The cross with a hammer and sickle is a reproduction of another carved during the 1970s by Fr. Luis Espinal Camps, a Spanish Jesuit who was a missionary in Bolivia who was killed in 1980 during the Bolivian dictatorship.
At a July 9 press briefing the Holy See press officer, Fr. Federico Lombardi, noted the lack of clarity in the audio of the exchange, and remarked that Pope Francis had been unaware the crucifix was a replica of Fr. Espinal's.
He also claimed that Fr. Espinal's use of it was not ideological but expressed a hope for dialogue between communism and the Church, adding that Pope Francis' remark likely expresed a sentiment of “I didnt' know”, rather than “This is not right.”
Morales' gift has sparked a worldwide controversy, and reactions were not long in coming. The majority of them accuse Morales of trying to politicize the Pope's visit.
Morales is head of Bolivia's Movement for Socialism party, and his adminstration has focused on implementing leftist policies in the nation. Since coming to power in 2006, Morales has frequently sparred with the Bolivian bishops.
Catholics from various Hispanophone countries rejected Morales' gesture, considering it offensive to the numerous victims of terrorist groups in Latin America and of the historical totalitarian communist regimes.
Bishop Jose Munilla Aguirre of San Sebastián, a Spaniard, tweeted: “The height of arrogance is to manipulate God in the service of atheistic ideologies … Today, once again: #ChristCrucified”.
Fr. Espinal – whose “communist crucifix” was the model for Morales' gift to the Pope – was a journalist who advocated for human rights and democracy, continues to be a source of controversy in Bolivia.
While en route from the La Paz airport to the presidential palace, Pope Francis stopped to pray at the location where Fr. Espinal's corpse was found after his March 21, 1980 kidnapping and murder.
“Dear sisters and brothers. I stopped here to greet you and above all to remember. To remember a brother, our brother, a victim of interests who did not want him to fight for the freedom of Bolivia,” the Pope said to those gathered at the site, after arriving by way of an open popemobile.
“May Christ draw this man into himself. Lord give him eternal rest and may light shine for him that has no end.”
Some regard Fr. Espinal as a martyr who lived the Gospel with the same spirit as Blessed Oscar Romero – who was martyred by right wing Salvadorans two days after Fr. Espinal's death – while others claim the priest was a communist and became too involved in politics.
Born in 1932 in Barcelona, Fr. Espinal studied both philosophy and theology before entering the Jesuit novitiate in Veruela in Zaragoza at the age of 17.
The same year he traveled to Bergamo, Italy to study audiovisual journalism. After two years he returned to Spain and began to work for Spanish radio and television corporation TVE at the height of  Francisco Franco's rule.
Fr. Espinola denounced the censorships placed on TVE under Franco and left Spain. He moved to Bolivia in August 1968, where he took over as chair in the journalism department of the Bolivian Catholic University, and later become sub-director.
He was granted Bolivian citizenship in 1970, and over the course of the next 10 years worked in both the written and radio press, produced documentaries on social themes and got into screenwriting.
As an avid defender of human rights, the priest cofounded the Permanent Assembly of Human Rights in Bolivia in 1976. During the 1971 military coup led by Hugo Banzer Suarez, Fr. Espinola intervened on behalf of persecuted and detained politicians and trade unions.
In 1977 he participated in a three-week-long hunger strike to gain general amnesty for political exiles, validity of trade unions and the withdrawal of the army from mining centers.
In 1979 Fr. Espinola founded the weekly newspaper “Aqui,” which was quickly dubbed “leftist” due to its anti-establishment views and vocal criticism of government corruption.
As a result of his work, the priest was kidnapped by a group of paramilitaries March 21, 1980, while on his way home.
According to police and militants at the time, the militants took Fr. Espinola to La Paz' Achachicala slaughterhouse, where he was tortured for five hours before being shot 17 times. His body was found handcuffed and gagged the next morning.
In 2007, Morales officially declared March 21 as the “Day of Bolivian Cinema” due to the priest’s contributions in the area. On that day, cinemas and television channels are obliged to show national films, particularly relating to the themes of human rights and indigenous peoples.
Fr. Lombardi noted during a July 6 press briefing that no cause has been opened for Fr. Espinal's beatification.