Pope Francis’ advice to altar servers: Let Christ draw near to you 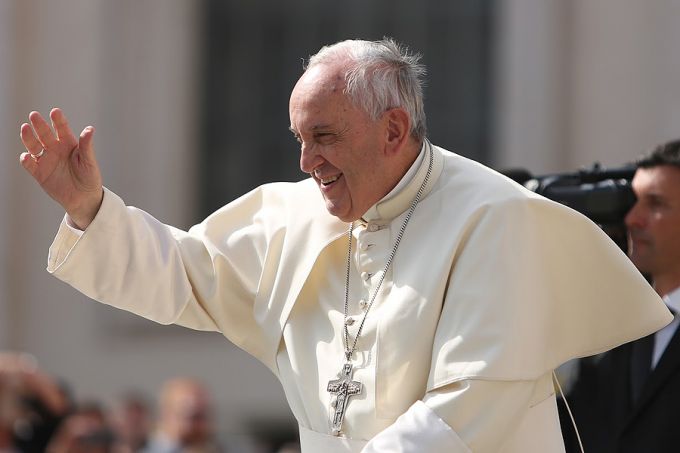 By Elise Harris. Vatican City, Aug 4, 2015 / 11:46 am (CNA/EWTN News).- In his first public audience in a month, Pope Francis told thousands of young altar servers on Tuesday that they should be open to Christ, who isn’t someone far off, but is close to us in the Eucharist and the other sacraments.
“You do not encounter Jesus placed on an inaccessibly high throne, but in the bread and wine of the Eucharist. His word does not shake the doorposts, but rather caresses the strings of the heart,” the Pope said Aug. 4 in St. Peter's Square.
“If we do not resist him, Jesus will touch our lips with the flame of his merciful love, as he did to the prophet Isaiah. This will make us worthy to receive him and to bring him to our brothers and sisters.”
To be close to Christ and to get to know him in the Eucharist enables one to be open to others, to journey together, and to set and accomplish demanding goals, Francis observed.
“It is a source of real joy to recognize that we are small and weak, all the while knowing that, with Jesus’ help, we can be strengthened and take up the challenge of life’s great journey in his company.”
After taking a break from public audiences in July, Pope Francis prayed Vespers with the 12,000 altar servers gathered in Rome for their annual pilgrimage to the Eternal City. This year’s pilgrimage theme is “Here I am, send me,” spoken by Isaiah in response to God’s call.
Lasting Aug. 3-6, conference attendees hail from Germany, Austria, France, Portugal, Switzerland, Hungary, Serbia, and Italy.
The pilgrimage was led by Bishop Ladislav Nemet of Zrenjanin, who is president of the International Union of Altar Servers.
The Pope’s homily for the event centered on the day’s reading from the Book of Isaiah, in which the glory of God was revealed to the prophet in a vision. However, in the vision it was also revealed that although the Lord had made himself known to Isaiah, he still remained distant.
Isaiah was surprised to discover that it was God who had made the first move toward him, and not the other way around, the Pope said, adding that “God is the one drawing close.”
Francis noted how Isaiah realized that his own imperfections didn’t impede the Lord from acting in his life, and that it was God’s goodness alone that enabled him to take up his mission as a prophet, after being transformed into a new person able to respond to God’s call.
“You are more fortunate today than the prophet Isaiah” because of the sacraments, particularly the Eucharist, he said. In them, we experience “the intimate closeness of Jesus, the sweetness and power of his presence.”
Like Isaiah, we are also invited to be open, and “not remain closed in on ourselves, protecting our faith in an underground bunker to which we flee in difficult moments,” the Pope explained.
Instead, we are called to share the joy of knowing we are chosen by God and saved by his mercy.
“How beautiful it is to realize that faith brings us out of ourselves, out of our isolation,” he said, explaining that it is due to the joy of being friends with Christ that faith is able to draws us toward others, “making us natural missionaries!”
Pope Francis concluded his homily by telling the servers that the closer they are to the altar, the more they will remember to pray and be nourished by the Word and Body of the Lord.
Being close to the altar will also help them to go out and meet others, sharing with them the joy and enthusiasm they have received in their encounter with Christ.
Francis thanked the youth for serving at the Lord’s altar and for “making of this service a real school of learning the faith, and charity toward your neighbor. Thank you also for having begun to respond to the Lord, like the prophet Isaiah, ‘Here I am. Send me.’”