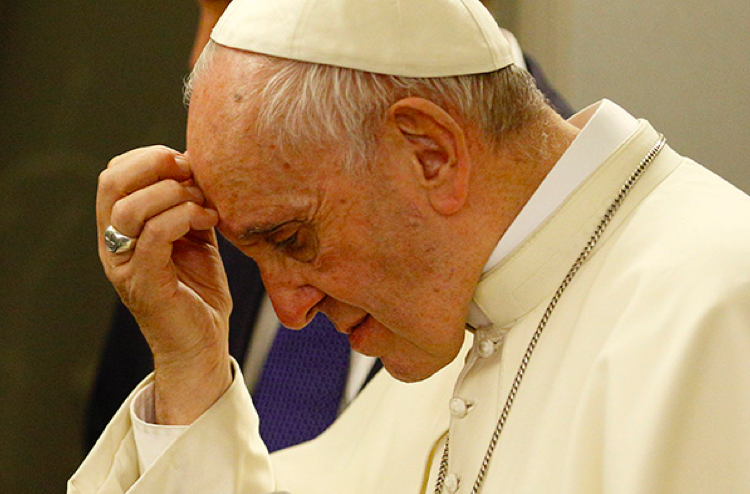 What is  to be noted precisely in Pope Francis’ interview on  board the plane from Dhaka to Rome, (please read the story below) is, he is deliberately changing(correcting could be more correct, though less respectful) his ‘saintly’ (an admission even saints can make mistakes) predecessor.

The above image of his eloquent facial expressions, crushed under the enormous weight of his moral duty to utter the unpalatable, bitter ‘irrational truth’ about the production and use of murderous nuclear bombs brings to fore in our mind’s canvas, the image of that “behold the Man” on trial before Pilot, urging all to decide without any further discussion!

Discussion on nuclear disarmament started when super powers, especially US and Russia, based on the principle of balance of terror, were confronting each other by increasing their military arsenal and wasting their precious wealth, to destroy and not build, each other. When it slowly dawned the stupidity of this suicidal policy, they started thinking of total nuclear disarmament of all nations by getting all,  except the top two of course, to sign in for  a nuclear disarmament treaty. India refused to sign in that treaty as it  was and is an utter violation of the principles of freedom, sovereignty and equality of all nations, big or small.

The compromise arrived at was the Superpowers would start reducing their nuclear stockpile and those not yet in nuclear club should never contemplate to join that club. It was like saying, ‘we in the nuclear club’ will allow all to freely breath in the air around, but  keep to ourselves the right to control the content of oxygen in the air.

Another more telling example is the conduct of all democratic parties, especially in India, who wax eloquent, on the greatness of democracy, “government of the people, by the people, for the people” to make sure the will of the majority ascertained through the ballot box, but  without applying that rule to decide who should call the shots in each party. These parties never practice internal democracy. If there is even a semblance of it, it is in the Communist parties, who preach the dictatorship of the proletariat. No one can give what they don’t have or enforce what they do not practice.

In India, one man one vote is enforced, in US even that is given a goby. All are equal, except the colored, who are less equal than the white, they assume. So   in  the   last election, Hilary who got  one million votes more than Trump, got defeated. That is why some critics in US themselves frankly described  their democracy also as a “government of hypocrites, by hypocrites, for hypocrites.” Of course, Indians who claim a moral high  everywhere, can’t afford to ‘stoop’ to that level!

That is why this scribe always defended India’s refusal to sign the nuclear non-proliferation treaty. Now Francis Pappa had the courage to back track and say in effect, the  very production and possession of nuclear weapons is morally unacceptable. Otherwise also, is it not the height of irrationality to entrust the US, the only country which knowingly and willingly  dropped nuclear bombs on Hiroshima and Nagasaki as the watchman? How can such a country be trusted with non-use of nuclear bombs? It would be like trusting the fox with the task of guarding hens and chicken.

We saw how the US headed by Bush used his “weapons of Mass destruction” to destroy a Sadam Husein, who had none of it. The “irrationality” Francis speaks of, is the practice of calling a dog a bad name to kill it. No one will build up nuclear stock piles, if it is not for using it. No country will allow easy access to deadly guns to its citizens, if it is not for allowing them for using them. Morality is in the intention.

Therefore building up and possessing a nuclear arsenal is immoral, as Francis asserts. But how many takers of it, will there be in the present day nuclear ‘club’ in our so-called civilized (or barbaric) nations? That is the BIG QUESTION! Sorry, hardly any,  to our fallible mind! james kottoor, editor ccv.

Please read below  report of papal interview in the plane. 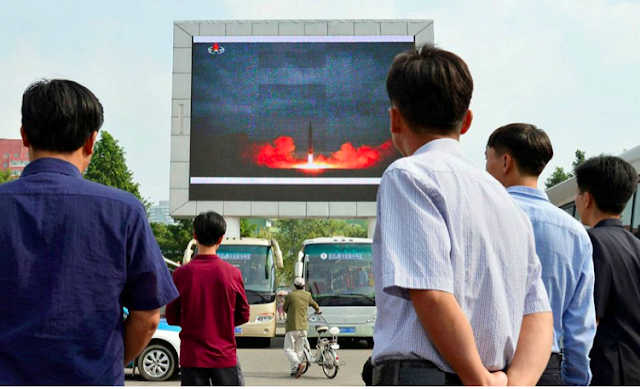 In the pic: North Koreans watch a news report of an intermediate-range ballistic missile launch on a big screen at Pyongyang station in Pyongyang, North Korea, Aug. 30. (CNS/Kyodo via Reuters)

ABOARD THE PAPAL FLIGHT FROM BANGLADESH — Pope Francis has inferred that the global political system has become irrational, describing his decision last month to shift papal teaching away from an acceptance of nuclear deterrence as partly due to the world's instability.

In an hour-long press conference aboard the papal flight to Rome Dec. 2, the pontiff also said it is his "convinced opinion" that the world is "at the limit of licitly having and using nuclear weapons."

Asked what about the world situation had changed that caused him to break with the church's previous acceptance of nuclear deterrence, and if recent saber-rattling between U.S. President Donald Trump and North Korea's Kim Jong Un had played a role, the pope replied: "What has changed is the irrationality."

Pope Francis pauses as he answers questions from journalists aboard his flight from Dhaka, Bangladesh, to Rome Dec. 2. (CNS/Paul

Comparing his Nov. 10 statement that the "very possession" of nuclear weapons is to be "firmly condemned" to Pope John Paul II's determination in 1982 that deterrence was "morally acceptable," Francis said: "Many years have passed since the time of John Paul II."

"Today, we are at the limit," the pontiff continued. "Why? Because with nuclear arsenals that are so sophisticated today, the destruction of humanity is at risk, or at least the great part of humanity."

Francis then told journalists he wanted to ask a question "not as part of the papal magisterium, but [as] a question made by a pope."

"Today, is it licit to maintain nuclear arsenals as they are?" he asked. "Or, today, to save creation, to save humanity, is it not necessary to go backwards?"

Francis spoke about deterrence as part of a press conference in which he also detailed his reasoning for not referring directly to the persecution of Rohingya Muslims for most of his Nov. 27-Dec. 2 visit to Myanmar and Bangladesh.

The question about nuclear weapons was the fourth in the conference, but the only one concerning matters other than the foreign visit. After hearing the query, the pope said he would answer it but that he would prefer then to answer questions about his trip.

"I would like … more on the trip, because [otherwise] it would make it seem like it wasn't very interesting, no?" he said.

The pope condemned the possession of nuclear weapons in an address to a conference hosted by the Vatican to follow up on a new U.N. treaty, signed by 122 countries, that calls for the complete elimination of nuclear arsenals.

While previous pontiffs have called for nuclear abolition, they also granted conditional moral acceptance to the policy of deterrence, which arose after World War II when the U.S. and the Soviet Union stockpiled nuclear weapons in order to discourage either country from launching an atomic attack.

In 1982, John Paul II sent a letter to the Second Special Session of the United Nations General Assembly Devoted to Disarmament saying that because of the need for defensive balance, deterrence was acceptable "as a step on the way toward a progressive disarmament."

The U.S. bishops adopted John Paul II's calculation in their landmark 1983 pastoral letter "The Challenge of Peace: God's Promise and Our Response," offering a "strictly conditioned moral acceptance" of deterrence.

North Korea said this week it had tested a new ballistic missile with an operative range that includes most of the U.S. [Joshua J. McElwee is NCR Vatican correspondent. His email address is jmcelwee@ncronline.org. Follow him on Twitter: @joshjmac.]