Pope ‘Disturbed’ Over Violence in Syria 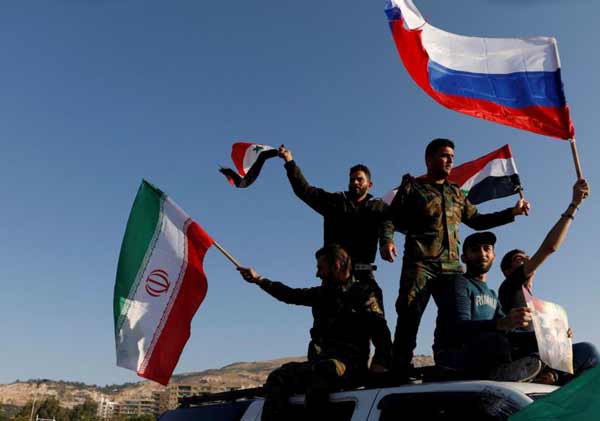 Pope Francis, the messenger of peace, is rightly very disturbed by the escalating violence and destruction of lives and properties in Syria.  All his appeals to the world's leading powers it appears is falling on deaf ears. Will he decline donations and aid from the perpetrators of the Syrian War?  Is another Iraq being repeated? Remember Saddam Hussein was annihilated on the flimsy excuse of stockpiling chemical weapons? Nothing was proven ever by the US and its allies that he really possessed these weapons. Isaac Gomes, Asso. Editor, Church Citizens' Voice.

In the cover image Syrians wave Iranian, Russian and Syrian flags during an April 14 protest against U.S.-led air strikes in Damascus. The United States, France and Britain launched airstrikes in Syria to punish President Bashar Assad for an apparent chemical attack against civilians and to deter him from doing it again. (Photo: Catholic News Service/Omar Sanadiki, Reuters)

VATICAN CITY (CNS) – Sharply criticizing a failure to find nonviolent means of bringing peace to Syria and other parts of the world, Pope Francis appealed to world leaders to work for justice and peace.

“I am deeply disturbed by the current world situation, in which, despite the instruments available to international community, it struggles to agree on joint action in favor of peace in Syria and other regions of the world,” he said after praying the “Regina Coeli” with people gathered in St. Peter’s Square April 15.

“While I unceasingly pray for peace and invite all people of good will to keep doing the same, I appeal once again to all political leaders so that justice and peace may prevail,” he said.

The missile strikes came one week after an alleged chemical attack in the Ghouta region, outside Damascus.

The Russian Orthodox Patriarch Kirill of Moscow telephoned Pope Francis after the missile attack, he told reporters April 15 at his residence outside of Moscow.

“We shared the common concern about the situation in Syria, and we talked about how Christians should influence this situation to stop violence, war and so many tragic victims as we have seen in these days,” he said.

The patriarchate launched an initiative to unite Christian leaders from the East and West to promote peace and prevent a humanitarian crisis in Syria, said Father Aleksandr Volkov, spokesman for the Russian patriarchate.

Christians “cannot be silent when things like those of these days are taking place in Syria,” Patriarch Kirill said.

“Each of them has expressed a willingness to continue consultations to find a way to stop the bloodshed,” he added.

The Syrian Catholic and Orthodox patriarchs of Syria also publicly condemned the “brutal aggression” of the U.S.-led allied missile attack and called upon all churches in the countries that participated to likewise condemn the attack and urge their governments to work toward international peace.

In a statement issued April 14 from the Syrian capital of Damascus – the patriarchal seats of their respective churches – the patriarchs said they “condemn and denounce the brutal aggression that took place this morning against our precious country Syria by the U.S.A., France and the U.K., under the allegations that the Syrian government has used chemical weapons.”

Referring to the April 14 air strikes, the Catholic and Orthodox patriarchs said the timing of “this unjustified aggression against Syria” undermines the work of the independent International Commission for Inquiry, which was about to carry out its investigation in Syria into the alleged chemical attack.

“The allegations of the U.S.A. and other countries that the Syrian army is using chemical weapons and that Syria is a country that owns and uses this kind of weapon, is a claim that is unjustified and unsupported by sufficient and clear evidence,” the Christian leaders said.

“This brutal aggression is a clear violation of the international laws and the U.N. Charter, because it is an unjustified assault on a sovereign country,” the patriarchs said.