Pope: ‘Church needs to get political’ 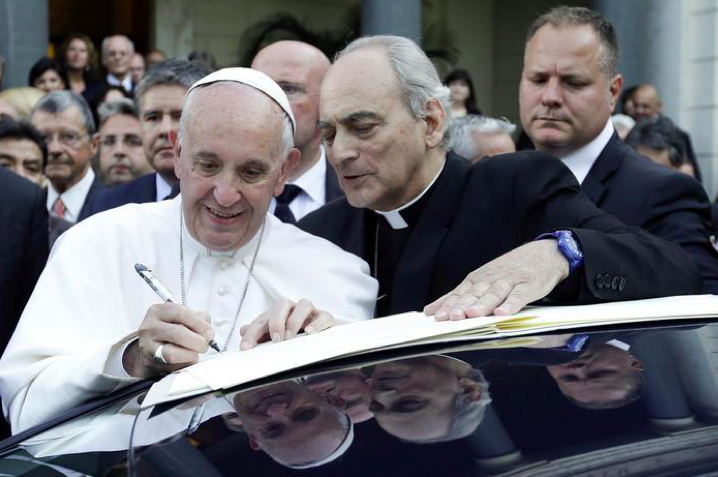 Must meddle in Politics?

(Note: What is the most preferred profession in the world? It will vary from person to person. Another may say, it is politics which works for the common good, the greatest good for the greatest number of people. Is there any other profession which works for a greater, brighter goal? If there is, please contradict this statement and explain and accept thanks in advance. The oft-repeated exhortation we hear is: “Don’t mix religion and politics, church and state.” What is implied is matters religious are far more precious, noble, sacred etc. than politics which is full of wheeling and dealing in  mundane matters drenched in corruption, in-flight, blood shed and conquest and exploitation of the weak by the strong. All these things are found in equal measure or more also in Religions. Today we hear talks of development everywhere. Pope Paul VI said something very profound about it to reflect upon for ages. He said: “Development is the new name for peace” and by development he meant, development of the WHOLE MAN(that is intellectual man, spiritual, social, cultural, material, family and all facets of man) and ALL MEN (that is, eliminating all divisions in society on the basis of class, caste, creed, community, country etc to reach out to all.) Can there be a more universal vision of politics of development? With such a vision how can anyone, especially one like Francis, stay out of active involvement in active politics? james kottoor, editor)

VATICAN CITY: The Church has a duty to be involved in politics when it comes to combatting global problems such as human trafficking, Pope Francis told a summit in the Vatican yesterday.

The Pope, who was speaking to a group of judges and legal experts from around the world, said that it was not true that the Church should keep out of the political realm.

Francis said instead that the Church must immerse itself in “greater politics” quoting Paul VI's remarks that: “politics is one of the highest forms of charity.” Combatting human trafficking has become one of the central features of this papacy and he has backed global efforts to eradicate the problem which has become a multi-billion pound criminal business.

During his speech to the gathering, organised by the Pontifical Academy of Social Sciences, he stressed the need for judges to be independent and to remain free from the pressures of governments, private institutions and “the structures of sin” such as organised crime. “Without this freedom, a nation’s judiciary is corrupted and corrupting,” the Pope told the gathering taking place at the Casina Pio IV in the Vatican gardens.

He also called on countries to consider emulating Italy by seizing money made by human traffickers and using it to help victims.“Perhaps it may help to apply, according to the characteristics of each country, on every continent and in every legal tradition, the Italian practice of recovering the ill-gotten gains of traffickers and criminals and offering them to society and, in particular, for the reintegration of the victims,” he said.

The summit was attended by judges and legal experts from across the world including the United States’ anti-slavery ambassador Susan Coppedge and the British government’s anti-slavery tsar Kevin Hyland.The Global Slavery Index estimates that more than 40 million people across the world are victims of trafficking or slavery with the majority forced into slave labour or exploited for sex.

The Holy See has been trying to mobilise efforts to combat the scourge including summits in the Vatican and the launching of the Santa Marta Group to police chiefs and the church to work together.Tackling human trafficking is included in the recent United Nations’ Sustainable Development Goals and the Pope called on countries to honour the pledge.

At the end of the gathering yesterday a 10 point declaration was signed by Francis and all the participants: these include that countries recognise trafficking as a crime against humanity and that undocumented victims be given temporary residence permits.