Pope Calls All Religions to Follow Path of Mercy 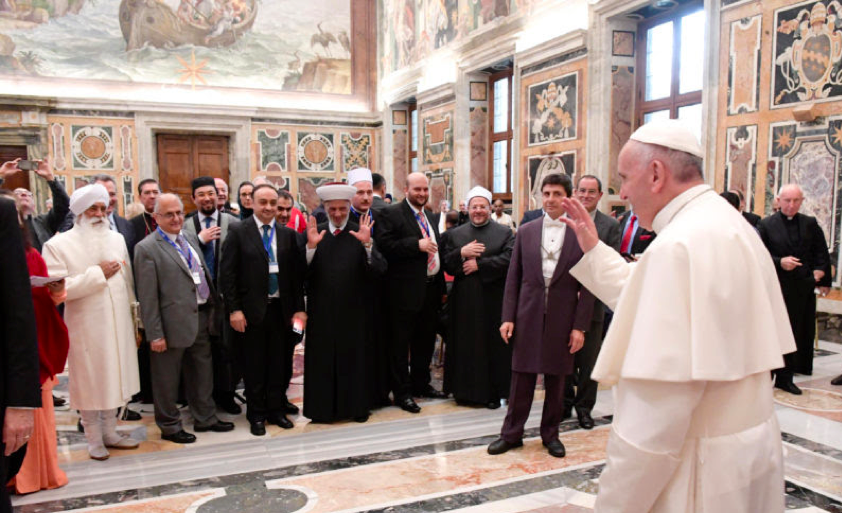 (Note: Mercy is the bench mark of  Francis, which is also at the heart of all religions, especially Hinduism and Islam. Recall the prayer: Loka Samasta Sukino Bhavantu and Vasudaiva Kudumbakam, so much alike Catholicism’s Catholicity.

India gave example to all other countries in welcoming all religions, starting with Christians in AD 82, then Jews, Muslims etc. Photos below speak more vividly. James kottoor, editor)

Mercy, for Catholics, “reveals the name of God,” is the “very foundation of the Church’s life” and is also the “key to understanding the mystery of man.”

The Pope offered this explanation of the importance of mercy when he met today with some 200 representatives of other religions — Christian, Jewish, Muslim, Buddhist, Hindu and others. The audience was held in the context of the Jubilee of Mercy, as it now approaches its end (on the feast of Christ the King, Nov. 20).

The Pope said the “mystery of mercy is not to be celebrated in words alone, but above all by deeds, by a truly merciful way of life marked by disinterested love, fraternal service and sincere sharing. The Church increasingly desires to adopt this way of life, also as part of her ‘duty to foster unity and charity’ among all men and women.”

Religions are called to this way of life, the Holy Father affirmed, “in order to be, particularly in our own day, messengers of peace and builders of communion, and to proclaim, in opposition to all those who sow conflict, division and intolerance, that ours is a time of fraternity.”

The Pope said this is why it’s important to seek encounter — an encounter that avoids syncretism but that makes us more open to dialogue and understanding.

“This is pleasing to God and constitutes an urgent task,” he said, “responding not only to today’s needs but above all to the summons to love which is the soul of all authentic religion.” 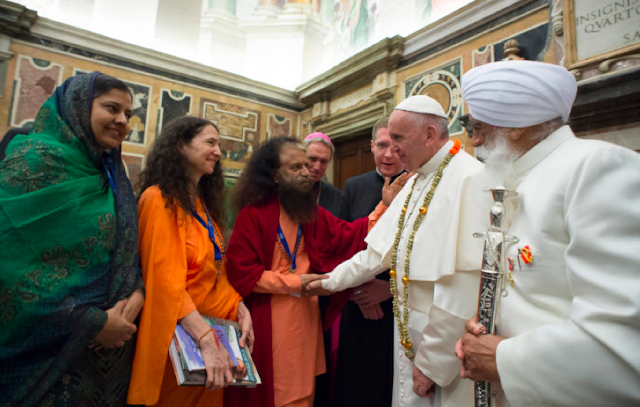 The Pontiff noted how the theme of mercy is familiar to many religious and cultural traditions: “To bow down with compassionate love before the weak and needy is part of the authentic spirit of religion, which rejects the temptation to resort to force, refuses to barter human lives and sees others as brothers and sisters, and never mere statistics.”

He said this response to the suffering is a “summons rising from the heart of every genuine religious tradition. It is the echo of the divine voice heard in the conscience of every person.”

“The very word ‘mercy’ is a summons to an open and compassionate heart,” Francis continued. “It comes from the Latin world misericordia, which evokes a heart – cor – sensitive to suffering, but especially to those who suffer, a heart that overcomes indifference because it shares in the sufferings of others. In the Semitic languages, like Arabic and Hebrew, the root RHM, which also expresses God’s mercy, has to do with a mother’s womb, the deepest source of human love, the feelings of a mother for the child to whom she will give birth.”

Nevertheless, we forget and our hearts “grow heedless and indifferent,” the Pope said, and we “end up repeating, in even more cruel forms, the tragic errors of other times.”

And yet, before the “drama of evil,” precisely here, “we find the most amazing aspect of merciful love. That love does not leave us prey to evil or to our own frailty; it does not “forget”, but “remembers”, and draws near to every human misery in order to relieve it. Like a mother. Whatever the evil done by her child, a mother always sees past the sin to recognize the face she bore in her womb.”

The world today is ever more in need of “the oxygen of this gratuitous and life-giving love.” “We thirst for mercy and no technology can quench that thirst,” the Pope said.

The Holy Father invited the religious leaders to follow this path: “May we reject the aimless paths of disagreement and closed-mindedness. May it never happen again that the religions, because of the conduct of some of their followers, convey a distorted message, out of tune with that of mercy. May the religions be wombs of life, bearing the merciful love of God to a wounded and needy humanity; may they be doors of hope helping to penetrate the walls erected by pride and fear.”