Pope Calls for Every European Parish to Take in Refugee Family 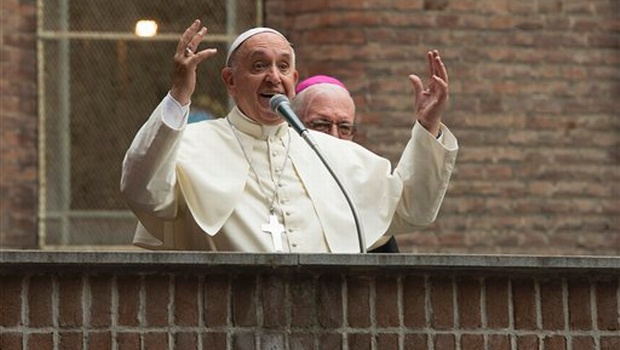 The pope urged "every parish, every religious community, every monastery, every sanctuary in Europe (to) take in a family. (File/AP)

(Note: What better example of leading by example? “Each parish, religious community in Europe, take in a refugee family. My two parishes of Rome will take a family each,” he entreats showing the way, leading the way. What better example to leaders of all religions as well as to rulers of European nations. Can anyone with their eyes focused on the tree-year old migrant toddler washed ashore peaceful but lifeless say NO to this heart-rending plea? james kottoor, editor)

VATICAN CITY: Pope Francis today called on every Catholic parish in Europe to take in a refugee family, saying the Vatican's two parishes would lead by example.

Calling for a "concrete gesture" ahead of a Jubilee Year of Mercy starting in December, the pope urged "every parish, every religious community, every monastery, every sanctuary in Europe (to) take in a family.
"Faced with the tragedy of tens of thousands of asylum-seekers fleeing death (as) victims of war and hunger who are hoping to start a new life, the gospel calls on us and asks us to be the neighbour of the smallest and the most abandoned, to give them concrete hope," he said, giving the Angelus blessing in Saint Peter's Square in Rome.

It's not just about saying "have courage, be patient", Francis — who has made poverty and migration a key theme of his papacy — told thousands of faithful gathered in the square.

"Christian hope is more combative", he said, calling on "Europe's bishops, the true pastors to back my call in their dioceses."The Vatican would lead the way, he said, announcing that its two parishes would take in two refugee families "in the coming days".

Drawing on a gospel story in which Jesus heals a deaf and mute man, the Argentinian-born pontiff said a miracle had also taken place in Europe, where "we have been healed of the deafness of selfishness and the silence of retreating into ourselves.
"The closed couple, the closed family, the closed group, the closed parish, the closed country, that comes from us, it has nothing to do with God," he stressed.